Oh God! “How many more need to die on our roads?” 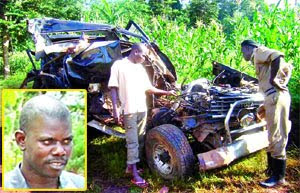 Not long ago, I went for an Introduction Ceremony of a long time friend. On our way back, I wondered whether it was worth risking life to go for some of these functions given our drivers. To the function we had an institution driver who was driving a new vehicle and it is until traffic police warned him about his speed that he realized he was speeding. On the way back, I thought changing vehicles was a better option. It wasn’t! We came while it rained and at times I had to tell the driver to mind our security, and by grace of God we arrived in one piece. Recently a bus crushed into a trailer in Lugazi and the death toll has risen to 40! I remember a time when Idi Amin banned the trucks on roads at night. Given the death rate on our roads, it may be better to have trucks stop traveling at night. 40 people can not perish in accident and we take this normal. Speed Governors are yet to be enforced, and it is a political decision that they are yet to be implemented. There is simply a lot of junk vehicles including buses imported in the country as well as used/old spare parts. After those deaths, what happens to the dependants? Is it any body’s concern? Can we get serious in this country and stop having politics leading in all decisions to be made. If vehicle owners cry about the cost of fitting speed governors, should we scrap them and just let people die? What ever possible ought to be done to have safer road transport
Posted by williamkituuka.com at 8:17 AM