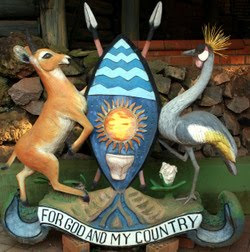 3. DRAFT PROBLEM TO BE ADDRESSED:
1) Uganda today and its future are so uncertain because the country is completely derailed from any viable development agenda; what is at hand are personal visions which are devoid of quantifiable and sustainable national objectives to the extent that the regime bases on perceived ‘political sense’ as opposed to economic sense, which has cultivated a very fertile ground for corruption to flourish and made the youth of the country become a time bomb as unemployment gets to record levels; with no realistic measures to counter it; while at the same time, the country has been derailed from a viable economic development path to such uncertain destiny where the projection is the eventual stand still for the country.
2) With all donor support since 1986 which could have helped into getting Uganda into possibly a Switzerland of Africa. What is clear is that resources have not been well allocated and some have gone to nurture the middle class at the expense of a wider population that would be beneficiary; hence the eventual creation of a class of the super rich co – existing with paupers!
3) The regime is interested in sub – dividing a country into smaller units which not only are a burden to the people but have disintegrated a would be unified country at a time when national coherence is more beneficial to economic development and national unity.
4) The regime has killed institutions and hence what is at work is the Almighty Power at State House – ‘provider,’ this has promoted increased bureaucracy and inefficiency at a time when efficiency is most needed.
5) The regime’s involvement in Regional Politics has put the country’s security at risk hence the need for an ever big defense and security budgets for the needed logistics.
6) Unfortunately, as opposed to the history of the country, the regime has been at liberty to manipulate the 1995 Constitution using the NRM numbers in Parliament and opened up the Presidential tenure in office; which in essence is a big liability to the people of Uganda and the fruits of which are already at play for all to see;
7) Contrary to the basic reason why NRM/A went to the bush to wage war against the Elected Government of the time; there are a number of reported cases and Court Judgments that have pointed to the NRM players as potential actors in malpractices yet when they went to bush because of an alleged stolen victory by the UPC Government.

5. DRAFT MAJOR ACTIVITIES IN ORDER OF IMPORTANCE PRIOR TO 2011 GENERAL ELECTIONS
1) Induce more opposition parties to join the Inter – Party Cooperation;
2) Review the IPC Working Documents/Policies and constitution and have them agreeable to all the parties to the cooperation with the IPC Secretariat Headed by a 3 person committee representative of IPC forces;
3) Call for idea contribution from opposition members of the IPC at grassroots to contribute to the content of the IPC 2011 Election Manifesto to be used by every IPC candidate during campaigns;
4) Work on the IPC Manifesto for 2011 Elections incorporating reviews of all laws that are detrimental to the development efforts of the country; endorsement of a uniform federal arrangement in the country as per the Odoki Commission findings; the eventual launch of the Manifesto;
5) Agree on strategies for fundraising for the IPC;
6) Work on the IPC budget and have copies of the budget disseminated to potential donors;
7) Convince potential voters interested in seeing positive change come the 2011 to get registered; this through among other means FM Radio publicity;
8) Get intensively interested in the operations of the Electoral Commission; the National Voters’ Register; and the actual voters hence eliminate as many ghosts as possible, as well as take extra interest in the Gazetted Polling Centres and convince Government to have the Voters’ Register displayed on the Electoral Commission website;
9) Use all possible convincing strategy to agree on fielding one IPC candidate for each elective and appeal to unsuccessful candidates not to come up as independents for the sake of having the desired change;
10) Elect the IPC Presidential Candidate;
11) Ensure that all Party Presidential Candidates have a constituency so that they stand chance of going to Parliament after the 2011 elections.

DRAFT BY William Kituuka
IPC ideologist at Heart
Posted by williamkituuka.com at 5:59 AM