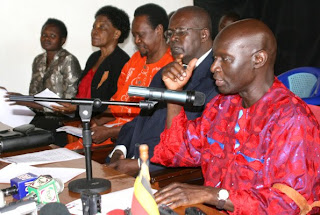 Dr Olara Otunnu, the new President of Uganda People’s Congress has shown maturity and that he stands for Unity and Reconciliation on appointing three of his former opponents as party executives to drive campaigns for 2011 ballot. Former UPC National Chairman, Mr Yonna Kanyomozi, an ex - Co-operatives Minister during Obote II Government, and Mr Sosparter Akwenyu have been named Special Presidential Envoys. While Mr Henry Mayega, who together with the duo lost the Party President slot to Dr Otunnu at the delegates’ conference, is now Regional Vice Chairperson for central region.
There is a lot we learn from such acts of civilization as this is the way forward in healing wounds.


-Coordinator: (Membership To Be Confirmed,..)

-Coordinator: (Membership To Be Confirmed...)

The UPC Council Of Elders:

Office Of The President