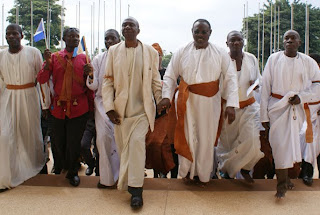 The commitment of the cabinet of Uganda to pay all monies due to Mengo is a good development as long as it really gets implemented. What is disappointing is how Government requests the Mengo establishment to put in its invoice for the long outstanding debt. It is believed that Government ought to have official tenancy terms with Mengo and as such should know what in monetary terms is outstanding. The Information minister Kabakumba Matsiko confirmed that Cabinet had discussed issues raised by Mengo in the aftermath of the fire that gutted the Kasubi royal tombs.
“Whatever is owed to Mengo by the Government will be paid once verified and agreed on. When and how is the question,” she said. The issue of when again puts us to square one. Earlier this financial year, it was said that money owed to Mengo was to be paid. By then talk was about shs 8bn; however, a few months to the end of the financial year, the money is yet to be paid.
Posted by williamkituuka.com at 9:12 AM