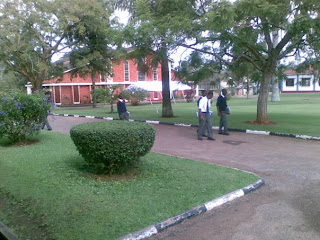 Mr. J. C. Kiwanuka, the longest serving teacher at St. Mary’s College Kisubi (SMACK) from 1951 – 2001 made 89 years in July. We thank God for the gift of life he has given to our great Mathematics encyclopedia popularly known as Manoeuvre. He began teaching at Mary’s on October 1st 1951 making 57 years since he reported to teach at his former school. He is a graduate of Nottingham University, got his degree in June 1951, and was sponsored by Buganda Government.
Mr. J. C. Kiwanuka in the DP Government
As a Minister of Education in the short lived Democratic Party Government (for about one year), J. C says that he had the advantage of having been President of Uganda Teachers’ Association (UTA) hence knew many problems that existed in the profession, and following the Lawrence Commission Report with some adjustments, their Government acted on:
1) Improving Teachers’ Salaries and Conditions of Service;
2) They enacted the Teachers’ Pension Schemes for all teachers;
3) Equalised salaries of male and female teachers of the same grade, lay or religious;
4) Awarded 300 scholarships to suitable candidates in all walks of life including tailors, shoe makers, etc;
5) Started Higher School Certificate in Girls’ Schools for example Gayaza High School, Mt. St. Mary’s Namagunga and Trinity College Nabingo;
6) Some schools were given initial Government grants, for example Bishop S.S.S Mukono, Kibuli S.S.S, Christ the King Girls’ School (Kalisizo), Mary Hill Girls’ School, Lubiri S.S.S and Kiyira College (Busoga) built by the Kyabazinga.
7) During the one year stay in Government, they J. Cs administration enacted the Board of Governor’s Rules for Senior Secondary schools and Teachers’ Colleges.
8) The Teachers’ Conditions of Service were also enacted.
Manoeuvre says that when he started teaching at SMACK, starting HSC at St. Mary’s had penetrated his mind. He talked the matter over with the Late Brother Louis Chuonard and Brother Oscar Roger both former Headmasters of SMACK. Fortunately, they were also very keen on the idea. The Executive Committee of St. Mary’s Old Boys Association (SMOBA) made an appointment with the Late Governor Andrew Cohen to meet and discuss the matter. The Governor accepted to meet them, they discussed the matter, and on the occasion of the School’s Celebration of the 50th Anniversary, Sir Andrew Cohen broke the news that he had allowed the school to start Higher School Certificate (HSC). Sir Andrew Cohen broke the news that St. Mary’s Old Boy’s Association (SMOBA) was the only body that contacted him on this matter.
Mr Kiwanuka says that he feels very grateful to God for the venture of the HSC, which ended up a success through the vehicle of the Old Boys. The school now gets so many graduates from Makerere University and other Universities. Asked why SMACK has always excelled, Mr Kiwanuka says, “Because of her excellent basic foundation; spiritually, morally, academically.” He further says, “The first three Medical Doctors in Uganda are SMACK products (Dr Bamundaga, Dr Bamugye and Dr Baziwane). He says, “The old colonial idea that there was hardly anybody in Uganda that was capable of reading successfully for a degree was first smacked by a SMACK product. He smashed the theory on the colonialists’ own ground”.
Posted by williamkituuka.com at 8:44 AM