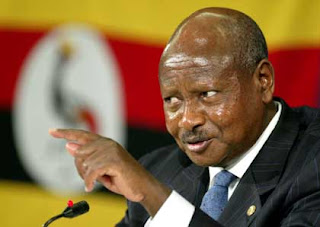 I am always amazed whenever I hear that President Museveni is on a visit to some district and is really touched by the poverty prevailing in the countryside. He ought to be concerned about the poverty because much of its intensity is directly due to the harsh economic policies of the day, more so given
the global financial crisis.
Finance Minister Dr Ezra Suruma told Parliament on Thursday, 23 2008 that while Uganda is not directly exposed to the risk, the crisis could lead to a reduction in money remitted by Ugandans in the Diaspora, aid flows from donor countries, and foreign direct investment into the country.
The minister’s statement came a few hours after Central Bank Governor Emmanuel Tumusiime - Mutebile told a press conference, called in the wake of the shilling’s slide against the US dollar, that the global economic woes would slow Uganda’s growth.
“We expect the recession in Europe and the US to reduce demand on our exports. This will lead to less earnings from exports, earnings from tourism are also going to be affected,” Mr Mutebile said. “Tentatively, I can say that instead of the 8 per cent growth rate, it will be in the range of 5 or 6 per cent.”
The global financial crisis, triggered by risky loans given to US borrowers and sold on across the world, has been raging for several months mainly in the developed world. Mr Mutebile told a press conference on September 24 that while there was need to be concerned, the effects on the Ugandan economy would be minimal.
The two economic chiefs, however, were forced to raise the red flag Thursday after the shilling fell steeply against the US dollar in this week’s trading. The shilling traded at Shs2,200 to the dollar by close of Wednesday before cooling down marginally yesterday to Shs2,000 after the Central Bank injected $300,000 (Shs600 million) into the market.
“There are already signs of depreciation of the shilling in the foreign exchange market,” Dr Suruma told MPs. “We are watching it very closely and will take the action necessary to encourage exports and stem inflation.” Given the above new development, knowing that things have not been better either for the poor prior to this development, it should be is easier on a macro – level for the president to help the poor people by remaining in his office and dealing with among other things the following:
Creation of new districts/administrative units – not only should there be a ban on this, but actually some created districts should cease to be. This culture of politicking is funny, and also annoying. You get to Kajjansi trading centre where one Town Board would be created, but because people want to reap from politics, here are two town boards to be created in same district one bordering the other and the dividing line is a water passage which crosses Entebbe Highway from the side of Uganda Clays! These would under normal circumstances be in one Town, but trust political schemers, we are to have two towns in what would be one town! Secondly, again under Local Governance, time is now to trim the number of counselors on various councils because supporting them is already to heavy a duty in financial terms to the poor.
Oversized Parliament – we don’t need the oversized Parliament, and the games going on now as regards the Temangalo land saga show you how the institution is gradually losing repute! Less than half the size of Parliament we have can deliver better and even be better facilitated. It is in the mandate of the President to see this a reality if he is really concerned about the poverty.
He should do away with Presidential advisers – much of the work these do if at all they do anyway is supposed to be done by the technical personnel in the Ministries.
Check corruption – if the President does not get the corrupt investigated to the end, he may have to stomach more of what for example Bishop Luzinda said at the burial of Dr. Sebunya. Corruption has reached stinking levels and people can now react in ways which may even embarrass the Head of State. Prosecution should be done to the conclusive end and not just make news that some prosecution is on and shortly after abandoned.
The President need to identify cadres capable of manning critical aspects of the economy which are productive in nature instead of sycophants we always hear about who are useless yet milk the economy.
There is need for cutting all tax rates across the board – this will positively boost disposable income hence the purchasing power for goods and services and chances are that more taxes will be realized, as well as productivity, as high costs of virtually everything are constraining increased economic activity.
Much has to be done to boost agro-based industrialization. It is not clear why this is failing, as this is one basis for export income.
Posted by williamkituuka.com at 8:02 AM