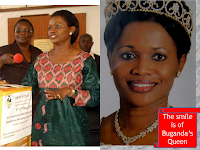 The Queen of Buganda, Sylvia Nagginda, has denounced polygamy, saying, the practice is one of the major causes of the spread of HIV/Aids.
While launching the HIV-positive mothers’ week to mark the International Women’s Day at Kitante Primary school, the Nnabagereka castigated polygamous tendencies common among African cultures, saying if men stopped the practice, it would help in the fight against new infections among married couples.
“Good cultural values like having one partner promote good health, contrary to what many people believe,” the Nnabagereka told a group from the Ministry of Health and the donor community.
“We cannot underestimate the role of our culture in promoting good health among mothers and their children,” she said, adding that people should engage men to walk with their wives in this challenge.
Among the Baganda, polygamy was a cherished virtue, and men with many wives were usually seen as prosperous.
However, the Nnabagereka’s message aims at offering a new cultural strategy on how to fight HIV/Aids among married people, which boosts confidence among many women who often vainly looked on as their husbands pegged their polygamous tendencies on culture.
She asked men to accompany their wives to hospitals for not only ante-natal care, but also to seek HIV counselling and treatment.
“This should be an era where a mother living with HIV is sure of getting free treatment and is also sure her baby will not die,” she said.
Since 2001, the United Nations Population Fund (UNFPA) and the Population Secretariat have supported the Nnabagereka’s missions to promote safe motherhood and promote good culture in Uganda.
Speaking at the same function, the manager of the prevention of mother-to-child transmission of HIV (PMTCT) in the ministry of health, Dr Godfrey Esiru, emphasised on the rise in new HIV infections among married people.
“New HIV infection is on the rise with a prevalence rate of 6.4 per cent, with a shifting from the young unmarried to the married couple, between 35 to 49 years. Among these, 50 per cent are discordant,” Dr Esiru said.
He also added that last year, about 65 per cent of pregnant mothers registered on the PMTCT programme and that the government is considering a change in the programme, from prevention (PMTCT) to elimination of mother-to-child transmission of the virus (EMTCT).
editorial@ug.nationmedia.com
Posted by williamkituuka.com at 12:24 AM