SHARMA KOOKY MUST DIE IN CUSTODY SOME WHERE; MUSEVENI IS A BIG JOKER 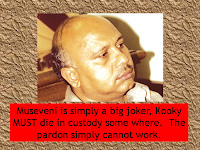 There must be boundaries to the Presidential Prerogative of mercy, and there must be justification before the prerogative is effected. The Human Rights Activists in Uganda and all those who respect human rights must pressurize Parliament to re-visit the prerogative of mercy by the President. There is no justification whatsoever that Kooky can go free, it simply cannot happen. For a person in his senses, we must ensure that the abuse of life is put to control. We have people in Uganda who by virtue of having accumulated think they have the right to terminate the lives of others. Museveni's prerogative of mercy regarding Kooky must be quashed immediately. Human Rights Activists must find a way to see Kooky back to custody even if it means elsewhere and not in Uganda. Museveni has for long favoured Asians, but regarding the Kooky's case, he has gone beyond the limits. What if it were Museveni's cousin murdered, it is unacceptable for Kooky to be free, he must immediately go back to cells for life. As Kooky leaves Luzira, we are then to hear Katuramu also pardoned; this trend is unacceptable, we must act responsibly, whether one contributed to the 5 year Bush war, it does not make him have the right to terminate the lives of others.
William Kituuka Kiwanuka

ACTIVISTS BITTER OVER RELEASE OF MURDER CONVICT SHARMA KOOKY
Activists on Monday March 26 described the release of Asian businessman Sharma Kooky, who was sentenced to death for the murder of his wife about 12 years ago, as a ‘shock’, questioning the criteria used.
Kooky walked to freedom following a presidential directive to the Commissioner General of Prisons, Dr Johnson Byabashaija, for his release on prerogative of mercy.
The officer in-charge of Upper Prisons, Mr Wilson Magomu, flagged off Kooky who was received by relatives at Luzira Maximum Security Prison yesterday. But women activists yesterday said his release sends a bad signal to other criminals, who can now think they will survive despite committing such grave acts.
“It is very unfortunate that the law mandates the President (Museveni) to order for release of any person. I don’t know the criteria followed and I am sure he did not repent but he should have paid for the crime he committed,” Ms Sheila Kawamara, the chairperson of Uganda Women’s Network, said.
“I am short of words but I think the public should rise up and demand government to release other convicts, including women who are there without help,” she said.
Share This Story
Share
The Supreme Court, in 2000 upheld the judgements of the Court of Appeal and the High Court, in which Kooky was sentenced to death for murdering his wife, Renu Joshi, by electrocution in December 1997 at their home on Martin Road in Old Kampala.
However, Kooky’s sentence in 2009 was commited to life following a Supreme Court judgement that death penalties could be converted into life imprisonment if those convicted are not executed within a period of three years.

“And where pursuant to Article 121 of the Constitution, the attorney on May 5, 2006, caused the case of the said Sharma Kooky to be considered by the advisory committee on the prerogative of mercy and the advisory committee advised that the said Sharma be granted pardon on humanitarian grounds,” reads part of the President’s March 22 letter.
Kooky’s brother, Davinder Kumar, with whom he was jointly charged for the murder but was later released, commended government for considering Kooky for pardon: “He is sick and cannot talk.”

Constitutional right
Prisons Spokesperson Frank Baine said the force was compelled to implement the presidential directive because it is a requirement by law.
The programme manager of Foundation for Human Rights Initiative, Ms Doreen Namyalo, welcomed the pardon, saying: “His (President) action shows government commitment to reform and rehabilitate rather than revenge.”
During his trial, where he appeared alongside his brother, Kooky attempted to change the story of his wife’s death, saying it resulted from malaria and high blood pressure.
Kooky is the fifth person in the last three years to enjoy the President’s prerogative of mercy after Al hajj Abdallah Nasur, Ali Fadhul, Ezra Kasasirwa and Chris Rwakasisi in 2009.