Katikiiro (Engineer) J. B. Walusimbi Jr should know that many hearts of Baganda are broken on seeing the re-construction of the Kasubi tombs having turned to a White Elephant project. Many are aware of the technical abilities of the Katikiiro, that he is a competent engineer; however, people have failed to get to terms with the state of affairs to date. It is very unclear what the actual problem is.

We have also been told that work has to start with other burial ground before Kasubi re-construction starts. This is unacceptable. The Katikiiro came up with a budget proposal of shs 10bn; the question raised is the source of the funds. The Baganda would love to see Kasubi tombs in the state they were before the ill fated fire of 16th March 2010. There is talk about the UNESCO funding. It is not clear where the funds are if at all they have been released. 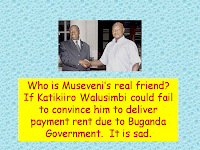 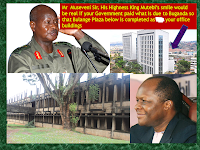 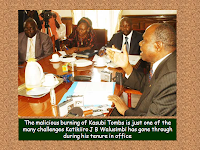 As for the funds from the Uganda Government, the reputation is such that Buganda cannot bank on such promises when the same Government has sat on monies due to Buganda for rents of premises the central government uses and is least concerned to make good payment of the monies so that Buganda Kingdom can utilize the money to enhance its development initiatives. The Katikiiro has gone a step further to blame people who think that he is not delivering yet they have not picked a coin. The Katikiiro assumes that people are okay. He is wrong. Many people in Uganda have a negative balance sheet. The liabilities far exceed the assets, in which case, their income is less than what they have to spend the money on. Those in market are on borrowed funds, many cannot afford a decent meal a day. So, when such people learn that there has been a contribution of shs 800m to see the reconstruction of the tombs, they expect the Engineer to make a reasonable budget to see the tombs stand at that money. It will be most unfortunate when all the funds contributed go to pay consultants without visible work done. The people in this case will blame the judgment of the Katikiiro. What ought to be done is get the Kasubi to its former image as long as bigger funds cannot be realized in the meantime. If billions are eventually got, the Engineers will again see what improvements can be made. But what we want to see is at least the Kasubi tombs as they were not non starter projects.
William Kituuka Kiwanuka


Some of my works can be accessed on the following links:

KASUBI TOMBS STILL IN RUINS TWO YEARS AFTER FIRE!
In Summary
Old kings first. Buganda Kingdom officials say the delay to reconstruct the cultural site is because they are first working on Wamala Tombs where the forefathers of the kings buried in Kasubi were laid to rest.
Exactly two years after the Kasubi Tombs mausoleum was set ablaze, no significant work has been done to reconstruct the cultural site, Daily Monitor has learnt.
According to Buganda Kingdom Information and Cabinet Affairs Minister, Peter Mayiga, the delay is blamed on the monarchy’s traditional norms which restrict any progress on Kasubi Tombs reconstruction before Wamala Tombs are rehabilitated.
Wamala Tombs in Wakiso District, are the burial site of Ssekabaka Ssuna II, the 29th king of Buganda and the great grandfather to five fallen kings at Kasubi Tombs.
“Traditionally, we could not go ahead to rebuild Kasubi Tombs before we restore Wamala Tombs where the father to the kings at Kasubi was buried. Some works like the reconstruction of the surrounding traditional huts have been done but reconstruction of the main mausoleum (Muzibuazaalampanga) has not started yet,” Mr Mayiga said.
He added that the main construction is expected to start next month.
Last year, Buganda Kingdom contracted Omega Construction Ltd to do the work at Shs2 billion.
Kasubi Tombs were razed by a mysterious fire.
Kings buried there are Muteesa I, Bassamula Mwanga II, Daudi Chwa and Edward Muteesa II.
According to Mr Mayiga, the kingdom has since collected Shs700 million from donations and well-wishers towards the reconstruction and Shs1 billion has been pledged by Unesco.
On July 28, 2010, government appointed a six-member team, headed by Justice Stephen George Engwau of the Court of Appeal, to investigate the cause of the inferno and the team handed over a report to government on March 16, 2011, which has been shelved to date.
Other commissioners were Florence Ssewanyana (secretary), Augustine Omara-Okurut from Unesco and Grace Akullo of Uganda Police Force.

FROM THE DAY THE SITE WENT UP IN FLAMES
March 16. Kasubi Tombs goes up in flames, razing the building that houses the graves of four former kings of Buganda.
March 17. President Museveni forcefully visits Kasubi Tombs in the morning. Two protesters are shot dead by police after they tried to stop the President from visiting burnt tombs. Kabaka also visits the resting place of his fallen father and grand fathers and breaks down in tears.
March 22. Lukiiko calls for an expanded and independent inquiry into the causes of major fires that have rocked the country.
March 29. Joseph Musoke confesses to torching Kasubi tombs.
March 31. Mengo dismisses Musoke’s claims as being very strange.
July 28, 2010. Government appoints a six-member team head by Justice Stephen George Engwau of the Court of Appeal to investigate the cause of the inferno.
Jan, 16, 2012. Catholic and Buganda Kingdom -leaning advocates issue a seven-day ultimatum to government to make the findings of the report public, or else they seek legal redress.