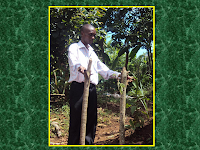 The photo is of Herbert Kiwalabye
Herbert Kiwalabye enjoys Self Help Group (SHG) formation and strengthening as playing. It is an art he has mastered. His most recent experience is when he went down to the field starting February 27, and with merger resources together with a few assistants was able to spearhead the formation of 20 (SHGs); 14 for women and 6 for men ranging from 15 to 2within just 5 days! In this reach out, he left many community members wondering where he had been all along; that he had taken so long to reach them with his mission of good news that can see to their betterment through a participatory effort where the beneficiaries are players.
What I learn from Kiwalabye is that many innovations meant to better the conditions of the poor can better be made under the umbrella of Self Help Group (SHG) initiative. One such program is NAADS. What this means is that the agents of change should get involved with those who are conversant with SHG formations and after the groups are in place, innovations like NAADS can follow. That way, better results can easily be realized.
In case you want to reach Herbert his Email and phone contact are:
Email: kiwalabyeh@yahoo.com
+256 701 424367
+256 775 424367
William Kituuka Kiwanuka.

BELOW, KIWALABYE EXPLAINS HIS EXPERIENCES WITH SHG

In most of the Least Developed Countries (LDCs), the word development has a different connotation to what it means to Middle Developed Countries (MDCs). In Africa; Governments normally get resources from the grass roots but without letting people at grass root to know how their resources have been used. This is the greatest hidden root for the flourishing of corruption which leads to poor service provision by these governments. 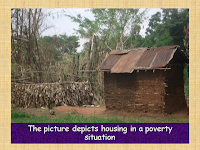 The good news is that Growth and eventually Development can be achieved through Empowerment in other words the capacity building of the people at the bottom; this is actually the SHG concept or Approach in its simplest terms. This approach has the potential of bridging all the gaps in development while impacting positively (empowering) the people’s lives Socially, Politically and Economically.

The Self Help Group Approach has grown out of the study and application of development Concepts at a community level, and seeks to combine the social, economic and political aspects of community development, leading to empowerment. It is founded on rights-based Principles that facilitate an atmosphere where individuals and communities can realize their potential and work towards their own development. A focus on attitudinal changes remains central to the approach and material well-being along with social and political development as well as empowerment is the final outcome. If this approach is well used, it can be a strategy and an entry point in all Community Development Efforts.
It is therefore recommended that NGOs and Local Governments apply this concept with the help from experts who know very well how the Self Help Group (SHG) can be applied. The concept saves resources while maximizing on impact while simplifying the work, it allows for quick and easy monitoring of results.
The SHG concept believes that people are very important in decision making on what should be implemented in their areas/communities. Hence NGOs and Governments agencies should not only give financial support to the people but also making them aware of the underlying situations regarding the circumstances in which they are. The SHG approach implies that, it is the people to always make the decisions therefore, the donors/ service providers should help the people according to the people’s priority needs and not according to what donors think should be the best for people/ dictating the entire development process.
It is of utmost importance for people to know their area well, taking into consideration all the resources, facilities like schools, health centres, places of worship, Police units, safe water sources, road network, transport means among others. Knowledge of such infrastructures helps communities to actively participate in discussing issues that affect them, hence their development. Given that background, community development agencies as well as potential service providers should make a right start in their effort to fight poverty and hence help the African child. 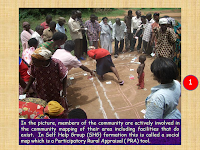 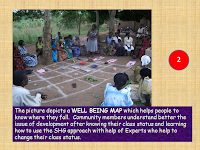 After the people have got to know their area/ community like in the above picture, it follows that the members of the community get to know the level of their wealth (as individuals) and the class status. For example in Rural areas, the rich are in number one, the middle class are in number two and the poor in number three.
This is KIZIMA village in Mukono District of Uganda. 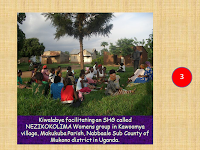 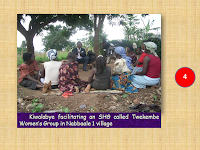 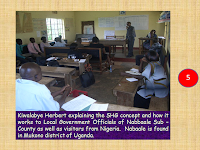 Why SHG approach in Least Developed Countries (LDC’s)?
Many of the existing groups/organization reaching out to communities initially focus on development other than empowerment.
1) The poorest of the poor people are usually not part of their target group.
2) There is usually little focus on the poor, bringing out (enhancing) the potential of people (Unleashing human potential).
3) Less emphasis on building strong communities.
Yet the SHG model is:
a. Cost effective, and
b. It enhances sustainable development.
FROM SHG TO THE FEDERATION:
1. In SHG formation group numbers should be 15 to 20 and single sex, and each village may have a good number of groups.
2. 8 to 12 selected SHGs can form a Cluster Level Association (CLA) at parish level.
3. The formed CLAs in a sub county can form a Federation.
The principle attributes to the SHG Approach include the following:
1) Empowering marginalized members of the community socially.
2) Ensuring strong social groupings, members address social-economic cultural issues.
3) Extra care under taken not to create dependency syndrome.
4) Remodeling groups to emphasize social empowerment as a vehicle towards social and economic development.
Chronological order of events leading to the development of community development projects to NGOs/ Government in Local Governments/ Districts/Sub counties.
1. Initiation stage.
2. Take off stage/ implementation stage.
3. Cross cutting issues in community development.
4. Project implementation.
I. Linkages with other strategic partners.
II. Networking/ Exchange of experiences.
III. Duration of the programmes
5. Monitoring and Evaluation.
6. Phase out and sustainability;
I. Clear targets
II. Strengthening SHG and CLA.
III. Role transfer.
IV. Asset transfer.
V. Federation.
VI. Staffing and staff development. The Self Help Group (SHG) concept is very good in enhancement of the development and welfare of children and mothers (given that they are the most disadvantaged) and to a small extent men.
Posted by williamkituuka.com at 12:18 AM