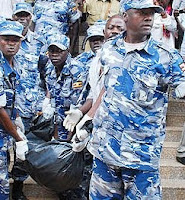 Police carrying the remains of Juliet Nalujja
The most recent incident where Juliet Nalugya committed suicide from the 14th Floor of the NSSF Building tells it all, yet it looks to be the 2nd case that may have a do with someone following payment of dues. Those who have attempted to go to NSSF offices wishing to get what is due to them more often than not get disappointed. This is very common with those who have lost dear ones and those with specific problems who see the funds as a source of redeemable funds that can bail them in their circumstances. NSSF office does not need to wait for more people to use the NSSF towers to terminate their lives. It is clear the trend that more people are likely to commit suicide due to a shock to their lives when they get a negative response from NSSF. I wish to propose that the NSSF department that processes payments to clients re-locates to premises that may not encourage one to commit suicide from.
It is also very important that NSSF undertakes more education programmes more so to those who save with it, such that these people get to know what is expected and when the fund may be able to help them. The fund should also start a new product in form of discountable papers which those who save with it can get from the fund offices such that when those papers are taken to a financial institution they can be discounted such that a saver with financial problems can be bailed out.
William Kituuka Kiwanuka

WOMAN JUMPS TO DEATH AT NSSF BUILDING
Friday, 16 March 2012
A woman this morning jumped from the 14th floor of Workers House to the ground floor dying instantly. Police was later able to identify the woman. Juliet Nalujja(26) of Kamuli zone in Kireka came to the building and went straight to NSSF offices.
Initially, she came under the pretext of registering as member of NSSF and then later walked to the balcony, threw her shoes and hand bag first and pulled her dress, and off she jumped. This is the second suicide case at this very spot. It is not yet clear what led to the young woman to take her life.
A big bang was heard after the woman fell on the ground floor which doubles as the reception and entrance to the building that was all littered with brains and blood.
In 2009, one Musa Siraj jumped from the 14th floor and died on the spot. Siraj had come to claim for his pension. He was referred to the inquiry desk but he instead moved to a window which he forced open and jumped.
A week before the Siraj incident, an employee of Phoenix Insurance with it's offices at Workers house slit his throat after failing to kill his girl friend, Phiona.
Posted by williamkituuka.com at 11:26 PM