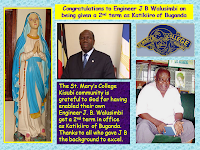 His Highness the Kabaka of Buganda, King Ronald Muwenda Mutebi II has granted Engineer J. B. Walusimbi another term as Katikiiro of Buganda. This is big news moreso that the Engineer had initially wanted just one term as the office is very challanging. The Katikiiro has an uphill task to see to the restoration of the burnt Kasubi tombs, the completion of Bulange Plaza, the unity of the people in Buganda and having real the poverty alleviation programmes of the kingdom. As an Old Boy of the same school where the Engineer was for 6 years, I take this opportunity to wish him success and to keep the school star shining.
DUC IN ALTUM
William Kituuka Kiwanuka

MORE SUPPORT IS NEEDED FOR KASUBI RESTORATION
Katikkiro Eng J.B. Walusimbi has stressed the need for joint efforts as the Kingdom restores Kasubi Tombs that were gutted by fire two years ago.
It should be remembered that Kasubi Tombs, a World Heritage Site caught fire on the night of March 16th 2010 which destroyed the entire house of Muzibuazaalampanga.
In his speech to the clan leaders who had brought in their contribution towards this noble cause, Katikkiro noted that people in Buganda are approximately 7 millions who need to join hands to see the completion of the tombs.
He is not happy that people in Buganda have not fully exploited their worth in contributing towards the reconstruction of Kasubi. The total amount of money required to restore Kasubi and other related tombs is 10 billions but that the Kingdom has so far collected 750 millions shillings of which 200 millions was contributed by people in the Diaspora, 250 was contributed by corporate companies and the 300 millions is the amount collected from the populace.
Eng Walusimbi emphasized the need to concentrate on securing the restoration of Kasubi Tombs and avoid any activities that are geared at jeopardizing its progress.
Katikkiro said that people have to respect the agreement that was reached upon between UNESCO, the Uganda Government and the Kingdom when the tombs were made a World Heritage Site as the restoration exercise is executed.
Katikkiro furthermore explained that reconstruction work at Wamala tombs is moving on smoothly and called upon people to start collecting the required materials for its completion. He said materials needed range from grass to timber including knives and pangs.
He was happy that the clan leaders have shown a great example to the grandchildren by contributing towards Kasubi and urge them to mobilize more of their clan members to contribute towards the tombs to accomplish the duty.
In their statement, the clan leaders led by Omutaka Nakilembeka expressed gratitude over what has been done so far on restoring Kasubi Tombs.
Omutaka Nakirembeka assured that they are happy that the cultural part of the restoration process has been respected.
The clan leaders are also thankful to every one of their grandchildren who has contributed towards the restoration of Kasubi tombs.
As the clan leaders’ council, they contributed 5,000,000 shillings towards the tombs which they said is the beginning and an incentive to the grandchildren to double their efforts in contributing towards Kasubi restoration.
Nakirembeka called upon all clans to mobilize their members to make contributions that will see off the reconstruction of Kasubi Tombs.
Posted by williamkituuka.com at 12:58 AM