Betty Nambooze's long anticipated victory is an expected blow to the NRM and what remains is unity of the Opposition to see NRM leadership go. 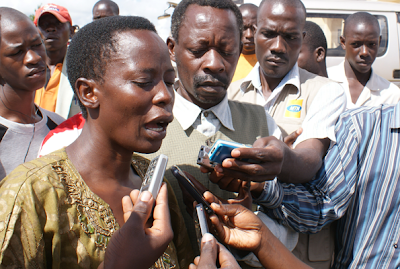 VICTOR: Ms Nambooze after she had voted yesterday. PHOTO BY ISAAC KASAMANI

Together is strength. At last the fake Reverend has been shown the exit! It is sad that inspite of all that was found out by the Supreme Court of Uganda regarding the Mukono North polls of 2006; the NRM had no better candidate to replace Bakaluba Mukasa. The power of the people has been shown. The appeal to the opposition is that it is only when we are together that the evil in the NRM can be shown the exit. There is need to return sanity to the Pearl of Africa, but each party individually cannot go far even if power were handed over; without working collectively it may not be maintained. Meaningful change can only be got not after getting the Presidency, but the numbers in Parliament. The Movement will keep threatening people by using the forces but one day, the good Lord will help our country out of the darkness we are in. This however is only possible when those opposition leaders who want to go it alone see sense and hence look for unity to get the NRM out of the development roadblock for our dear country.

FOR GOD AND MY COUNTRY
William Kituuka

Nambooze wins Mukono North - Source: The Monitor:http://www.monitor.co.ug/News/National/-/688334/925880/-/x07kg6/-/index.html
By M. Nalugo, H. Mugagga, F. Muzaale and Stephen Otage
Posted Wednesday, May 26 2010 at 00:45
Kampala
Democratic Party candidate Betty Nambooze Bakireke yesterday won the hotly-contested Mukono North by-election, beating the National Resistance Movement’s Rev. Peter Bakaluba Mukasa by slightly more than 1,800 votes.
The Electoral Commission released results from the 157 polling stations at five minutes after midnight placing Ms Nambooze at 16,142 votes against Rev. Bakaluba’s 14,302. Invalid ballots totalled 663. Almost 30 minutes before the returning officer, Mr Francis Nkurunziza, declared the winner, a heated exchange had erupted inside the main tallying centre in Mukono town.
It transpired that the NRM candidate’s votes in Kalagala polling station, Kyampisi Sub-county, had been changed to 500 and yet the IPC had in their possession a signed declaration form which had Rev. Bakaluba winning 176 votes against Ms Nambooze’s 123.Before this, a large crowd of opposition supporters had thronged the Mukono Community Centre undeterred by the heavy police presence as EC officers counted and tallied results from the four sub-counties of Mukono Town Council, Kyampisi, Goma and Nama.
CBS chants
The crowd broke out into deafening chants, intermittently singing the Buganda Kingdom anthem while shouting “CBS, CBS” in reference to the kingdom’s closed radio station.
A visibly tired but elated Nambooze said, “I am so happy because I have worked for this achievement for a long time. Even after I was about to win, I was rigged which shows that the EC had an agenda but they have not succeeded.”
Ms Nambooze’s win will be viewed by the opposition as a testament to the vulnerability of the ruling NRM in a region where the cooling of relations between Buganda Kingdom and the central government could yet prove to be a decisive factor in next year’s general election. The DP candidate ran as a representative of local unhappiness at the perceived suppression of the kingdom’s wishes to have a federal system of government among other grievances.
Last month’s Supreme Court’s verdict affirming that Rev. Bakaluba had obtained his 22,680 votes against Ms Nambooze’s 22,232 through electoral malpractices in 2006, it is suggested, also played a role in denying him victory. Two days of last ditch rallying of the establishment support by President Museveni over the weekend were not enough to sway an electorate evidently still hurting over the run-ins Buganda had with the government in September last year.
At the time, the government stopped Buganda’s king, Ronald Mutebi, from visiting neighbouring Kayunga District on grounds that his presence there could provoke sectarian violence between the dominant Baganda population and the want-away sub-ethnic Banyala people. The blocking of this visit resulted in rioting in Kampala and a number of Buganda Districts between September 10 and 12 which officially left 27 people dead.
Ms Nambooze’s political stature has progressively grown in Buganda mainly from 2007 when she was appointed by the Kabaka as chairperson of the Kingdom’s civic education committee whose task was to educate the people about the alleged dangers posed by the Land Bill. She was arrested in 2008 along with kingdom ministers Charles Mayiga and Medard Ssegona over accusations of promoting sectarianism on the kingdom’s radio station, CBS, which was shut down following the Kayunga riots.
Other candidates who participated in this race were Zirimala Kiggundu (56 votes), Zimula Mukwaya (21), Charles Jjingo (60), Micheal Mubiru (21), Mathew Mutyaba (28) and John Ssebunya (20 votes).Yesterday’s result was being viewed by the Inter-Party Cooperation that brings together four opposition parties, and which backed Ms Nambooze’s campaign, as a victory for the country. “This result proves one point: when you work together, we can stop rigging to a very big extent. There is less confusion we cause among the electorate, because there is clarity of purpose. People should stop treating politics as a platform for individuals to shine,” said IPC spokesman Ibrahim Ssemuju.
Posted by williamkituuka.com at 10:39 PM