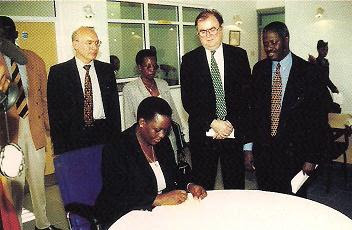 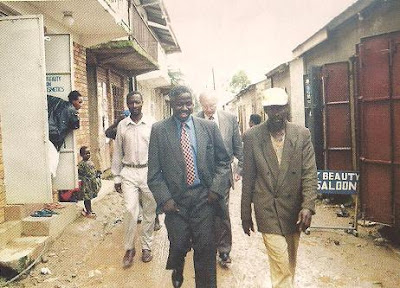 Wasswa Birigwa, then non Executive Director of Celtel toured Kampala Surburbs. At the time of the outbreak of the Cholera epidemic, Celtel donated shs 5m for the construction of pit latrines in various towns.
Wasswa’s Birigwa’s potential could be a bigger asset for Buganda and Uganda
Wasswa Birigwa the man who led the mobile telephone revolution in Uganda is a big asset for Buganda and Uganda if only he can re – discover his potential and make a new start. Birigwa cannot be forgotten by those who know that he is the known brain behind the mobile telephone in Uganda under Celtel. He came with the innovation, got millions from those who had them and his company was then the sole operator of the mobile telephones in Uganda. No wonder many of the first mobile customers have their numbers starting with 075. The likes of Birigwa make one big mistake investing in the National Resistance Movement (NRM) which has one man controlling the tap at the top and who for years now has not shown any potential brains who can take the country miles further.
It is high time Wasswa Birigwa re – discovered his potential and did the right thing. Birigwa had mobilized the cash people in his Celtel who he can dig out and forge a power base. The Baganda can move on comfortably with their man and the guy has connections with the money people. When Chief Executive at Celtel, in a record time, he put up the Celtel House which is still a challenge to other mobile operators. While opening the shs 4 bn Celtel House on October 7, 1997, Dr. Specioza Wandira the then Vice President who stood in for President Museveni said, “Celtel Cellular Limited should be very proud of the fact that they pioneered mobile telephony. You have weathered many storms and you have not only survived, you have prospered. This brand new building is a testimony to that if Celtel had been a parastatal, it would have cost Government US $20m and ten years to complete. “That five thousand subscribers would be connected by the end of the year is no mean achievement, the aim thus should be to turn it into a mass communication gadget not a status symbol,” Kazibwe added.
Birigwa is one man who can impress many youth; has a lot of development potential in form of ideas which can take Uganda miles ahead and hence give the right picture that it is a Pearl of Africa.

JAPAN TO BUILD POWER STATION
Japan will construct a 30KW hydro power station in Mukono next year, Wasswa Birigwa, the Ugandan ambassador to Japan, has said. He said the power project would lessen loadshedding.
Leading a team of technicians to ascertain the feasibility of the project at Ssezibwa Falls, Birigwa said the project was a result of good relations between the two governments. This landmark project will further strengthen warm relations between the Japanese and Ugandan governments, he said.
Koidi Hagiwara, a Japanese official, said the 30KW would serve over 200 homes and health centres. â€œWhat we are asking of Mukono is total cooperation. There are many other projects we can undertake, he said. Hagiwara said Mukono would have to sign a memorandum formalize the project.
He said Ssezibwa Falls has a constant water supply with rapids and falls capable of producing regular pressure.
By Tanah Hadijah
Posted by williamkituuka.com at 12:59 AM