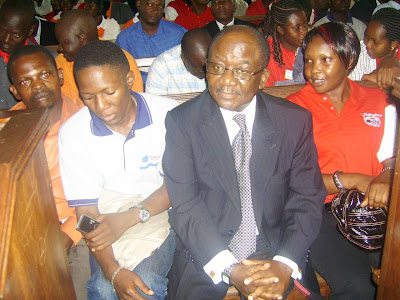 It is true, the central Government made a big mistake or miscalculated in blocking Kabaka Mutebi's visit to an area in his jurisdiction (Kayunga). It is also true that some CBS presenters played a big role in creating increased enmity with the powers that be in the central Government, hence being partly responsible for the reaction from the centre. The eventual development it can be remembered led to the closure of CBS FM which up to the end of May 2010 is still closed 8 months or so after. It is also alleged that the station was earning about 30m a day, which is almost 1bn a month; a total of 8bn so far lost in money that would help on a number of developments in Buganda more so keeping the people in Buganda aware of developments in the Kingdom and disseminating development related information. I wonder, what it costs the management of CBS in the circumstances if some members of staff approach the right authority appealing for re-opening of the station. The fact of lost revenue is clear when one looks at the volume of business to Bukedde FM which has taken over many of the adverts. When one imagines that may be many of CBS staff have not got alternative employment as they wait for the station to re-open, the situation they are in is not easy. I don't have a quarrel with any staff and advertisers joining hands to see the station back on air. I am one of those at a loss on what alternative station to listen to given the absence of CBS. The making of an effort to see the educative station back on air is in the right direction as far as many of us the potential beneficiaries are concerned. It is sad that we can take 2 weeks or so without hearing from Kabaka simply because the station is off air. Mobilisation has become very hard and the revenue at its lowest. The way forward is to have the station back on air. 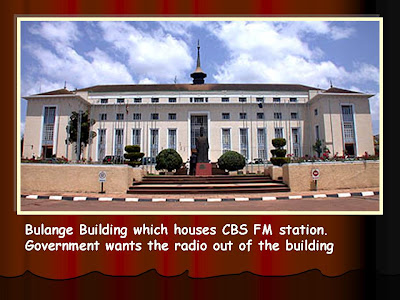 The issue of the station being taken out of Bulange still arises out of the fact that some presenters seem to get immunity to say anything as long as they are in Bulange. For the sake of a harmonious situation, management should agree and have CBS elsewhere. This one will not lead to loss of revenue as people would find it more accessible in city centre.
William Kituuka
Bulange is one of the most significant buildings found in the palace (Lubiri). It hosts the Kingdom’s administration and its Parliament where the Kabaka meets members of the Buganda Lukiiko (Buganda Parliament). Before Bulange building was constructed, members of the Lukiiko used to sit under trees on grass but later, they decided to build the Lukiiko sit which was grass thatched. Later, Sir Apollo Kaggwa who was the then Prime Minister decided to build a new Bulange with bricks. He gave the contract to an Indian Alidina Visram and work was started in 1902. It was constructed near the entrance to the Lubiri but its design and durability were highly criticized by the youth. However, when Kabaka’s government expanded, there was need to create a bigger Lukiiko hall. Therefore the new Bulange contrary to the Kiganda Culture was built outside the Lubiri something that saw a lot of criticism from most of the Baganda.
In the year 1953 while in exile in Scotland, Ssekabaka Muteesa II saw the plan, admired it, brought it with him on his return and he decided that the Lukiiko sit should be constructed using the plan. The construction work was started in 1953 and was completed in 1958 at a cost of 5 millions which was a vast sum of money by then. It became the administrative sit of the Kingdom and the main feature in it is the Lukiiko hall. It has no upper floors because in the Kiganda culture, no body sits above and over the Kabaka’s head “Kabaka tatulwa ku mutwe”. The spot at which Bulange stands was formally occupied by the first English Police Post and was called Namirembe. It took the name Bulange from Bulange hill due to the weaving grass that used to grow on that hill. It was built facing directly the Lubiri entrance with a mile long avenue called Kabakaanjagala linking the two. “Although it had for over 20 years been out of Buganda’s control, it still maintains its original stature despite once being gutted by fire. The symbols of the 50 clans are prominently depicted on the walls in the foyler of the Bulange.
In the year 1966, the country Uganda faced a political turmoil, the Lubiri was invaded and captured. Bulange was turned into the Uganda army headquarters and the cultural institutions were abolished. However, in the year 1993, cultural institutions were re-instated and Bulange was handed back to the Kingdom. Although the Lukiiko resumed its duties, there were restrictions in the way they were to carry out their work. The Kingdom became a constitutional monarchy. The Lukiiko was to legislate only cultural laws and to deal with other developmental issues but were barred from Politics. No political issues were to be handled by the Buganda Lukiiko. These were left for the central government. The Kabaka was made apolitical. By this time, the Lukiiko was composed of 68 directly elected members from the Buganda counties, 18 Buganda county chiefs, 6 members who were appointed by the Kabaka and members of the Buganda cabinet ministers.


CBS MANAGEMENT DISSOCIATE SELF FROM MAKING ANY APOLOGY - source: http://www.buganda.or.ug/index.php?option=com_content&view=article&id=1090:cbs-management-dissociate-self-from-making-any-apology&catid=41:buganda-news
Thursday, 22 April 2010 13:56
The management and staff of CBS fm radio have dissociated themselves from a group of employees who went to meet the president in state house at Entebbe over the radio’s closure early this week.
A group of employees including Davis Kiraga, Geoffrey Ndugga, Jennifer Christine Nassozi, Tamale Kkonde and Godfrey Sseguya aka Kayibanda went to state house to meet president Museveni with the help his Principal Private Secretary Amelia Kyambadde claiming to apologize to the president on behalf of other employees so that he can reopen the radio.
In a press conference held at the radio premises in Bulange, Mengo, the General Manager of the radio Kawooya Mwebe clarified that these employees were neither representing the management nor its other employees.
He stressed that the radio’s management is firm on its position with the case filed to the high court and respect the judge’s advice of settling the case out of court if the radio will be reopened.
Kawooya further stressed that as CBS management, they do not object to anyone meeting the president because it’s their right but meeting him on matters relating to the radio without their consent or that of all the employees is not acceptable.
The few employees who went to state house did not seek permission or inform the radio’s management or any of its other employees. This therefore means that they did it behind their employers’ backs. Kawooya added.
Kawooya maintained that these employees had their own agendas to fulfill because there is a respected committee led by Ex- Katikkiro Joseph Mulwanyamuli Ssemwogere which has on several occasions met the president over the reopening of CBS and therefore it did not necessitate any other person’s intervention into the same matter.
Posted by williamkituuka.com at 11:09 PM