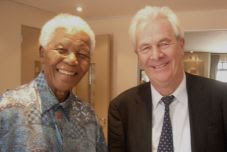 UNICEF Schools for Africa was initiated by the shipowner Peter Kramer. he would like to see the UN Millenium Goal No.2 fulfilled: Universal Primary Education for children by 2015. Given the circumstances in Uganda,I wish Uganda would be added to beneficiary countries.
William Kituuka

Information on Schools for Africa can be got from: http://www.schoolsforafrica.com/home.htm

UNICEF Schools for Africa - Source: http://www.noble-project.com/unicef-schools-for-africa.html
UNICEF SFA International Fundraising Campaign was initiated in partnership with the Nelson Mandela Foundation and the Hamburg Society for the promotion of Democracy and International Law.
Schools for Africa is making a significant contribution to Nelson Mandela's legacy and vision for the education of Africa's children and the alleviation of poverty, particularly in rural areas.
Posted by williamkituuka.com at 1:03 AM