Though Charles Mbire was a class a head of me, he is miles a part now

I met Charles Mbire at St.Mary's College Kisubiwhen I joined in 1974. Little did I know that after school we would be miles apart! it is true that by then and the standards of that time,the Mbire family was already an afluent one. I thank him for the support given to my publishing works for SMACK related literatures.
William Kituuka

THE EAGLE MET MR. CHARLES MBIRE.
The Eagle team (2002) included Robert Nturwabakye, John Nkwanga and Steven Mukasa.
Below are Excerpts.
The Eagle: Could you tell us about yourself?
Mr. Mbiire: I am Charles Mbiire, an Economist. I have several business interests ranging from Communications, Power projects, and several companies. I represent international companies in South Africa, Uganda, United States, U.K and now Nigeria. I am in major companies such as MTN Uganda where I am one of the founders, a shareholder and Director.
The Eagle: What attracted you to SMACK?
Mr. Mbiire: First, I think it’s one of the top schools. If you look around in all spheres of influence, you will always find somebody from SMACK.
The Eagle: Which House were you in?
Mr. Mbiire: Mugwanya House.
The Eagle: Who were your favourite teachers?
Mr. Mbiire: The teachers I remember are Mr. Mutumba, then Brother Sekitoleko, Brother Tinkasimire (who was very helpful to me). My Headmaster Brother Anthony Kyemwa who really disciplined us, and Mr J.C. Kiwanuka.
The Eagle: What unique trait did you get from SMACK?
Mr. Mbiire: One of them is going to church, the morals. I got a very strong religious background and then of course coming from an “upper class” primary school, when I got to St. Mary’s, it was a shock. I was brought down to reality to what we are in Uganda. I had never been to a boarding school before. SMACK actually groomed me into a man.
The Eagle: How was the interaction between S.1 and S.6 during your time?
Mr. Mbiire: There was division, for example, the S.6 had many privileges including dances, going out and the young boys were jealous. You know, it is natural.
The Eagle: No bullying?
Mr. Mbiire: No. In my life at Kisubi, I was never bullied.
The Eagle: How was the social life those days?
Mr. Mbiire: I remember when I was Vice-Chairman of the Social Club in S.4, we voted for Gayaza, Nabbingo and Namagunga. We used to have a lot of interaction because we had the Scripture Union, YCS, Debating and we used to go to Namagunga. Those were our friends. Our enemies were Namilyango, they used to call us weevils, and we were calling them fumblers.
The Eagle: What was SMACK known for besides academics?
Mr. Mbiire: We were the best at basketball, football, athletics and Table tennis. I want to resurrect basketball fully, we were the best, Kisubi was very good.
The Eagle: Any bad memories?
Mr. Mbiire: When a student drowned at Nabinonya beach, it is one of my worst memories in Kisubi it scared me. Then the food was very bad, but they tried their best. My worst experience was when the water pump blew and it was really terrible.
The Eagle: Any advice to the SMACK students?
Mr. Mbiire: Habits got in school live on. Be careful of what you do now. You may do it for fun but it will follow you. Remember God. You must also have a plan. Apply your brains in the right direction. Aim for the sky you will get the ceiling, aim for the ceiling. Man is the architect of his own destiny. 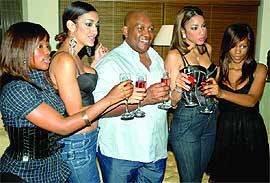 Charles Mbire (centre) with Brick N Lace and his daughters Nadia and Thandiwe (extreme left and right) at his residence in Nakasero
MONEY talks they say so when one man, who apparently has little trouble spending it says he wants one of the hottest musical groups on the international scene performing at a private party in the comfort of his residence, oh, they will listen! On New Year’s Eve, Charles Mbire, the MTN (Uganda) chairman and only Ugandan with a (5%) stake in the South African firm, summoned the multi-genre Jamaican duo Brick N Lace to his swanky Nakasero residence before their Hotel Africana do.
Apparently, Mbire’s daughters Nadia and Thandiwe, who both attend high school in the UK and are huge fans of the singers, had told their dad they wanted to have a private audience with their idols.
As such, Brick N Lace were hosted by the Mbire girls to a dinner at the house before they proceeded to the gardens where they performed to a select audience of Nadia and Thandiwe’s friends whose parents read like a list of who’s who on the society scale.
There was Fred Mugenga, heir apparent to the Mugenga empire, the Bunyeyezis, Kigongos, Col. Elly Kayanja, Eng. John Nasisira and Amelia Kyambedde’s. children. We don’t know how much Mbire paid the girls to perform but we hear they charged about sh37m for their commercial shows. 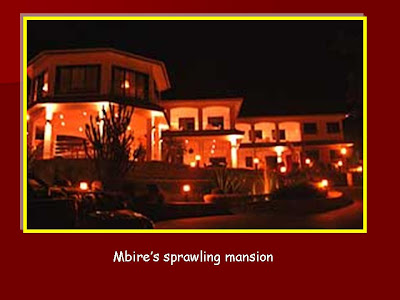 Libyan president Col. Muammar Gadaffi was mind-blown by Charles Mbire’s plush residence. The new exquisite look of the billionaire’s mansion, its secure and vantage location and lush green compound impressed Gadaffi during his four-day visit to Uganda in March.
Mbire had reportedly had his mansion refurbished, refurnished and redesigned by Rouche Bou Bou, world renowned home designers from France.
We also told you that Gaddafi had stayed at the same residence the three times he has been to Uganda.
Well, we have heard the Libyan leader’s fascination went so far, he actually asked Mbire for the plan of his mansion and has since reportedly contracted Clenco & Associates, a top South African architectural and design firm to replicate the same house in Libya.
Mbire used the exact same design for his villa in Kabale. He has since constructed a helipad on the land and is planning to turn the house, which overlooks Kabale town, into a country resort hotel. Hmm…

New Vision (Kampala) - Source: http://allafrica.com/stories/200803240230.html
Uganda: Mbire Hosts Libyan Leader Gadaffi
Elizabeth Agiro
22 March 2008
Kampala — THE Libyan leader, Col. Muammar Gadaffi, opted to stay at the home of Uganda's richest man instead of the plush presidential suites which were spruced up for the Commonwealth summit last year.
Sources said Gadaffi decided to stay at Charles Mbire's home in Nakasero during his four-day visit to Uganda last week due to its green lush setting and better security. The other heads of state he invited to the opening of the Gadaffi National Mosque were booked into various hotels in the city.

Charles Mbire
He started his career in 1985 as managing director of Pop-In Industries Limited and four years later moved on to become the Uganda resident representative of the Hyundai Corporation.
After a 6-year stint there he became chairman of Uganda Inflight Service Limited, a joint venture between Uganda Airlines Corporation, Fecis (Pty)Ltd, Efforte Corporation and Sunco Limited before becoming Chairman of the Board of Directors of MTN Uganda in 1998 in a joint venture between MTN (Pty)Ltd, Telia AB (Sweden), Tri-Star SARl and Mbire's investment company, Invesco (Uganda) Limited.MTN, he says, was the clinch. For one thing, it allowed him to pursue an obsession: human development and empowerment.
On this elementary economic logic, MTN, at the behest of Mbire, took a gamble in Uganda's largely informal market where other mobile service providers threw caution to the wind.
His timing seemed impeccable. We had another operator in the country charging $2,500 just to get connected. They would also close on a Saturdays and Sundays and there was no aftercare service, he says. The result: A large segment of Uganda's informal market was untapped; beyond the chimera of orthodox risk analysis, a competitor was opportune.
To Mbire, true innovation takes guts: The soft underbelly of what was, in essence, an expensive and uncompetitive monopoly was an opportunity to reload. So he geared up what became his signature investment arm, Invesco (Uganda) Limited, and looked for a company that could exploit the market with an affordable and resourceful offering to ordinary Ugandans.
As for spin-offs, take a drive out of Kampala towards Entebbe, and roadside bazaars nestle alongside a blur of squat makeshift cellular outlets bearing the yellow MTN signature as far as the eye can see.
Indirectly, MTN employs more than 15,000 people and, with 1,5 million active phones on its database, is the biggest taxpayer in the country an estimated 97 billion shillings over the past 7 years.
True, a rough calculation of 1,5 million phones charging on average once a day at the average electricity unit cost nets roughly $750,000 a day in revenue.
That's a small fortune in an underdeveloped economy. But the development spin-off is a lot more gratifying. Mbire's face beams with adoration for an ailing woman in a rural village who, because of the parlous state of infrastructure and exorbitant cost of a medical consultation, had no recourse to basic medical care.
Estimated fortune USD$55m

Mbire gets shares in limping RVR - Source:http://www.independent.co.ug/index.php/business/business-briefs/2543-mbire-gets-shares-in-limping-rvr
Wednesday, 24 February 2010 08:40 By The Independent Reporters
Uganda`s Charles Mbire, was last week set to take up a 15 % stake in the Rift Valley Railways. Mbire has been invited by the shareholders of the Rift Valley Railways to the buy shares. The RVR concession agreement was amended to allow the participation of Uganda into shareholding. Investor appetite for RVR is growing following the realisation that the railway line will be the main transport corridor for crude oil exports from Uganda’s recently discovered oil industry. The entry into RVR of Uganda`s Charles Mbire will have major implications for the battle between TransCentury and Citadel because contrary to the position taken by Kenya, Kampala has embraced the Egyptians.
Zain’s Kuwait Chief Executive calls it quits
Kuwaiti-based Zain’s chief executive, Saad al-Barrak, has called it quits re-igniting rumours of the possible sale of Zain Africa operations.
Zain was last year a headlines maker after its July 2009 announcement that it was looking at its options in Africa, including a possible sale of its networks there. At Zain Uganda Fred Massade the head of corporate affairs said they had received a circular about Al-Barrak`s resignation and nothing more.
Al-Barrak has been with Zain since 2002 and has been the main driving force behind the firm’s massive expansions and acquisitions. Over the past few years, Zain expanded rapidly by paying billions of dollars for huge acquisitions and has operations in 23 countries in Africa and the Middle East. During Al-barracks tenure of office, Zain`s customer base rose from around one million subscribers to about 72 million as of today.
In spite of its strong growth, the global financial meltdown forced some of Zain`s main shareholders, notably the biggest private investor, Al-Khorafi Group, to offer to sell a majority stake in the firm.
Posted by williamkituuka.com at 12:40 AM