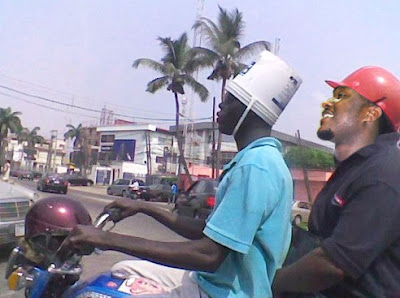 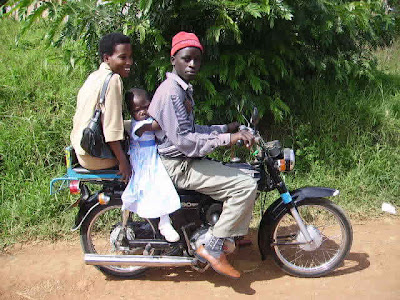 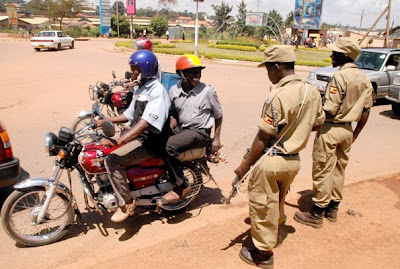 The commercial motor cyclists have in the recent past had many 'enemies'including those travellers who steal bikes from them in addition to taking their lives. These cyclists are now in high gear ready to confront anybody. On Friday, 7 May 2010, at Kajjansi trading centre, it was alleged that some fellow stole shs 700,000. After the loot, the guy got help of a boda boda cyclist, and no sooner had the word gone arounr; thief , thief; and the boda fellows joined the chase all a long Entebbe Highway. The other traffic had to give way to these boda fellows. And in the end, death and burning of the motor cycles is what happened. To the authorities, this is a very serious development. The boda guys cannot be above the law. We appreciate the problems they go through when doing their work, but mood justice is unacceptable. If you got hold of those who were inovled in the burning, they would not tell the crime that the victim had committed. Whoever is joking with boda boda's has to watch out, they have a potential which they are bound to abuse anytime.
William Kituuka

Dark times are back for bodas
By Tabu Butagira & Sheila Naturinda
Posted Friday, February 12 2010 at 00:00
Kampala
A young office worker dressed up smartly in her Namuwongo home and headed to work in the city centre.
About 10 minutes later, she was limping with a bruised leg and tattered outfit after the boda boda motorcycle she was being carried on fell, crashing into another one in front at the Mukwano Road-7th Street roundabout.
An armed police constable without a name tag had suddenly dashed from the roadside with a baton, to whack the boda rider who did not have a crash helmet.
The female passenger wore a blue helmet, perhaps the only one the cyclist had.
The rider zigzagged while struggling to retain control but shortly afterwards jumped off after seeing five other policemen, slinging AK-47 rifles, in hot pursuit.
Innocent cry
The woman howled as the motorcycle dropped on her feet while the one they knocked glided on the bitumen; yanking the other two passengers on it metres apart. A traffic jam quickly built at the turn.
This is the script of commotion, and agony, on most city streets this week as a well-intentioned but brutally executed crackdown on errant commercial cyclists entered a fourth day, disgracing law enforcers.
By 9am yesterday, Mr Henry Kalulu, the Police spokesman for Kampala Metropolitan, said since the start of the operation on Monday, they had seized 1,447 motorcycles. Many of the riders lacked permits while some carried those for light vehicle drivers.
Police require every boda boda - officials estimate there are some 60,000 operating in the city alone - to have two crash helmets, a Passenger Service Vehicle sticker, insurance and reflective coat that collectively cost about Shs400, 000.
“We are moving from stage to stage (tracking and arresting the errant boda boda men) and the operation is not about to end,” said Mr Bazil Mugisha, the commissioner for Traffic and Road Safety.
“We want a situation where they comply with traffic regulations,” he added.
Police said in their 2009 Accident Report that reckless cyclists directly caused 756 (about 32 per cent) of the 2, 340 fatal accidents in which 2, 677 people died. Some 15, 559 more were injured, perhaps permanently impaired.
Yesterday, Mr Mugisha said six in every 10 accidents in Uganda are either caused directly or aided by careless boda boda riders, which justifies the current clampdown.
Police say most commercial cyclists have no formal training in road usage; either do not know or deliberately flout traffic regulations – sometimes riding on proscribed lanes or dashing when traffic light flash red, complicating the traffic menace in Kampala. However, their skillful, sometimes precarious, maneuvers through the traffic jam have made them a choice for commuters in a hurry or on urgent assignments such as security operatives and journalists.
Many of the riders have been accused by Police of picking runaway robbers while sections of the public hold them suspiciously as listening posts for intelligence agencies.
This notwithstanding, the industry has transformed into a necessary evil of sorts and is booming in a country thirsty for organised and reliable public transport system.
And now the Police crackdown has caused travel blues for city dwellers and those in suburban areas with many reporting to work late or failing altogether. Most of them have increased their fares by at least Shs500.
Once President Museveni in 2001 rode to Kololo Airstrip for his nomination to contest in that year’s election on a boda boda, the riders gained a political currency that has made them difficult for officials to weed from the city centre despite several deadlines.


Museveni orders halt to ‘boda boda’ arrest - Source: http://www.thecitizen.co.tz/news/2-international-news/1011-museveni-orders-halt-to-boda-boda-arres.html
0diggsdigg
By Gerald Bareebe, Citizen Correspondent, Kampala
Crackdown on boda boda cyclists who do not have helmets should be halted, President Museveni has directed.
While addressing residents who had turned up to have a glimpse of South African president Jacob Zuma, who was launching the Pan African Wall of Fame in Kampala, Mr Museveni said sharing helmets could lead to the spread of diseases.
“I don’t believe in those helmets.
A motorcyclist can have his helmet but forcing passengers to put on helmets is not something that I support,” he said.
Mr Museveni said he had ordered the Inspector General of police, Maj Gen Kale Kayihura, to halt the Police crackdown on boda bodas in the city.

“Nobody should arrest you because you have no helmet. I will come back here and we talk about all your problems,” he added.

As soon as Mr Museveni left, the mob, chanting anti-police slogans, descended on Maj Gen Kayihura and waylaid him. It took about 10 minutes for the security to get him away from the crowd.

After the incident, Maj Gen Kayihua, told Daily Monitor that the police will stop the crack down on motorists carrying passengers with no helmets. He, however, said a crackdown on cyclists who do not wear helmets would continue.

“What we are doing is for their own benefit,” Gen Kayihura said when asked to comment on Mr Museveni’s directive.

“We have stopped arresting motorcyclists carrying passengers without helmets. In fact, for many days now, we have not been arresting them. But those riding without helmets will be arrested.”

The 2008 police accident report indicated that 70 per cent of patients admitted in Mulago Hospital alone were victims of boda boda accidents in Kampala.

The report also showed that in May 2008 about 325 people got serious injuries as a result of boda boda accidents.  About 50 per cent of accidents that occur in the city have also been attributed to boda bodas.

To offset this trend, the road safety committee of police launched a crackdown on boda boda riders whom, according to Police, had become a nuisance. On
Posted by williamkituuka.com at 2:37 AM