She founded, and fought, Mother's Day - Anna Jarvis' life was consumed by the holiday she started 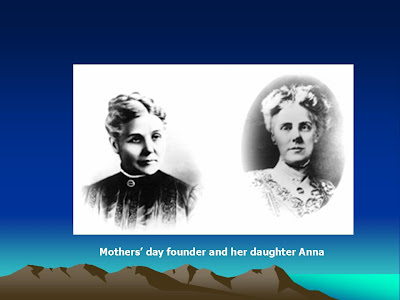 Compiled by the West Virginia State Archives
Ann Maria Reeves Jarvis' work with women's organizations inspired the creation of Mother's Day as a national holiday. She was born in Culpeper, Virginia, on September 30, 1832, the daughter of the Rev. Josiah W. and Nancy Kemper Reeves. The family moved to Barbour County in present-day West Virginia when the Rev. Reeves was transferred to a Methodist church in Philippi. In 1850, Ann married Granville E. Jarvis, the son of a Philippi Baptist minister. Two years later, Granville and Ann Jarvis moved to nearby Webster in Taylor County.
Jarvis organized a series of Mothers' Day Work Clubs in Webster, Grafton, Fetterman, Pruntytown, and Philippi, to improve health and sanitary conditions. Among other services, the clubs raised money for medicine, hired women to work for families in which the mothers suffered from tuberculosis, and inspected bottled milk and food. In 1860, local doctors supported the formation of clubs in other towns.
The Baltimore and Ohio Railroad made Taylor County a strategic site during the Civil War. Ann Jarvis urged the Mothers' Day Work Clubs to declare their neutrality and provide relief to both Union and Confederate soldiers. The clubs treated the wounded and regularly fed and clothed soldiers stationed in the area. Jarvis also managed to preserve an element of peace in a community being torn apart by political differences. During the war, she worked tirelessly despite the personal tragedy of losing four of her children to disease. In all, eight of her twelve children died before reaching adulthood.
Near the end of the war, the Jarvis family moved to the larger town of Grafton. Tensions increased as both Union and Confederate soldiers returned at war's end. In the summer of 1865, Ann Jarvis organized a Mothers' Friendship Day at the courthouse in Pruntytown to bring together soldiers and neighbors of all political beliefs. The event was a great success despite the fear of many that it would erupt in violence. Mothers' Friendship Day was an annual event for several years.
Ann Jarvis' life revolved around the church. Under Granville's leadership, the Andrews Methodist Church was built in Grafton and dedicated in 1873. Anna taught Sunday School at the church for the next twenty-five years. After Granville's death in 1902, Anna moved to Philadelphia to live with her son Claude and daughters Anna and Lillian. Ann Maria Reeves Jarvis died in Bala- Cynwyd, west of Philadelphia, on May 9, 1905. Her daughter Anna led a small tribute to her mother at Andrews Methodist Church on May 12, 1907, and dedicated her life to establishing a nationally recognized Mother's Day. The first official Mother's Day ceremonies were held at Andrews Methodist in Grafton and the Wanamaker Store Auditorium in Philadelphia on May 10, 1908. Six years later, President Woodrow Wilson signed a Congressional Resolution setting aside Mother's Day as a national holiday to be celebrated on the second Sunday in May. In 1952, the General Conference of the Methodist Church officially designated Andrews Methodist Church as a National Methodist Shrine.
Source: http://womensphilanthropy.typepad.com/stephaniedoty/2010/05/ann-maria-reeves-jarvis-the-founder-and-foe-of-mothers-day-.html 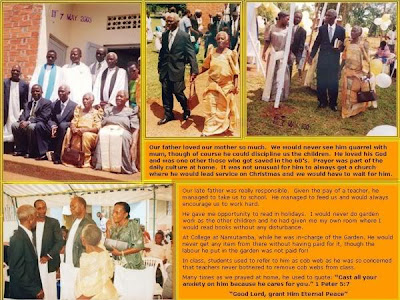 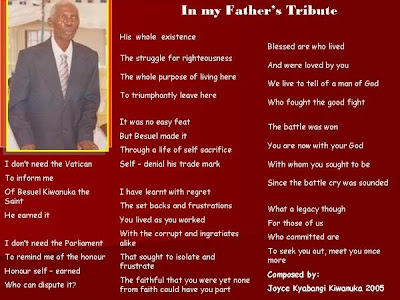 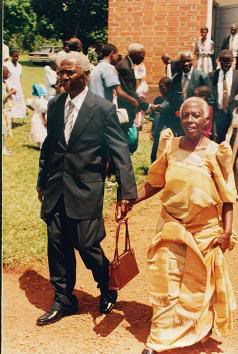 The late Mr. Besuel Kiwanuka and our mother both of whom loved us the children very much.
I can not fail to appreciate the role my mother played up to when I finished my University studies. She started me off as she was my first teacher, she taught me writing and counting; and by the time I joined the would be Nursery in 1966, when my Late father Besuel Kiwanuka was headmaster at Kasaka Primary school I was at an advantage. 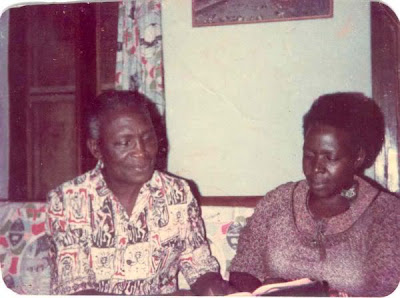 The Late Kikuule was a witness in my baptism
I recall while in primary school, mother used to wake up very early to prepare something for us and see us off to school. I was fortunate that these parents realised that I had much interest in reading and they left me alone to do my studies. I am very grateful. The love I was shown by mother was so much that at times could spend sometime with her in the kitchen. 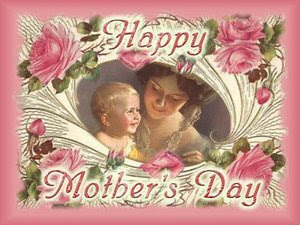 Ann Maria Reeves Jarvis
Anna Jarvis, daughter of Anna Reeves Jarvis, who had moved from Grafton, West Virginia, to Philadelphia, in 1890, was the power behind the official establishment of Mother's Day.
* swore at her mother's gravesite in 1905 to dedicate her life to her mother's project, and establish a Mother's Day to honor mothers, living and dead.
* a persistent rumor is that Anna's grief was intensified because she and her mother had quarreled and her mother died before they could reconcile.
* in 1907 she passed out 500 white carnations at her mother's church, St. Andrew's Methodist Episcopal Church in Grafton, West Virginia -- one for each mother in the congregation.
* May 10, 1908: the first church -- St. Andrew's in Grafton, West Virginia -- responded to her request for a Sunday service honoring mothers.
* 1908: John Wanamaker, a Philadelphia merchant, joined the campaign for Mother's Day.
* also in 1908: the first bill was presented in the U.S. Senate proposing establishment of Mother's Day, by Nebraska Senator Elmer Burkett, at the request of the Young Men's Christian Association. The proposal was killed by sending it back to committee, 33-14.
* 1909: Mother's Day services were held in 46 states plus Canada and Mexico.
* Anna Jarvis gave up her job -- sometimes reported as a teaching job, sometimes as a job clerking in an insurance office -- to work full-time writing letters to politicians, clergy members, business leaders, women's clubs and anyone else she thought might have some influence.
* Anna Jarvis was able to enlist the World's Sunday School Association in the lobbying campaign, a key success factor in convincing legislators in states and in the U.S. Congress to support the holiday.
* 1912: West Virginia became the first state to adopt an official Mother's Day
* 1914: the U.S. Congress passed a Joint Resolution, and President Woodrow Wilson signed it, establishing Mother's Day, emphasizing women's role in the family (not as activists in the public arena, as Howe's Mother's Day had been)
* Texas Senators Cotton Tom Heflin and Morris Shepard introduced the joint resolution adopted in 1914. Both were ardent prohibitionists.
* Anna Jarvis became increasingly concerned over the commercialization of Mother's Day: "I wanted it to be a day of sentiment, not profit." She opposed the selling of flowers (see below) and also the use of greeting cards: "a poor excuse for the letter you are too lazy to write."
* 1923: Anna Jarvis filed suit against New York Governor Al Smith, over a Mother's Day celebration; when a court threw the suit out, she began a public protest and was arrested for disturbing the peace.
* 1931: Anna Jarvis criticized Eleanor Roosevelt for her work with a Mother's Day committee that was not Jarvis' committee.
* Anna Jarvis never had children of her own. She died in 1948, blind and penniless, and was buried next to her mother in a cemetery in the Philadelphia area.
Mother's Day Landmark:
* the International Mother's Day Shrine: this church in Grafton, West Virginia, was the site of the first unofficial Mother's Day celebration as created by Anna Jarvis, May 10, 1907.
Mother's Day reaches 100th anniversary
The woman who lobbied for this day would berate you for buying a card 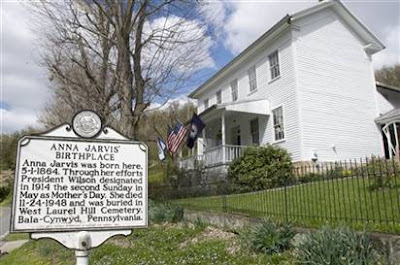 The Anna Jarvis Birthplace Museum commemorates the life of Anna Jarvis, the founder of Mother's Day.
GRAFTON, W.Va. - On this 100th anniversary of Mother's Day, the woman credited with creating one of the world's most celebrated holidays probably wouldn't be pleased with all the flowers, candy or gifts.
Anna Jarvis would want us to give mothers a white carnation — she felt it signified the purity of a mother's love.
Jarvis, who never married and never had children, got the Mother's Day idea after her mother said it would be nice if someone created a memorial to mothers.
Three years after her mother died in 1905, she organized the first official mother's day service at a church where her mother had spent more than 20 years teaching Sunday school.
Today, the former Andrews Methodist Episcopal Church is the official shrine to mothers around the world. On Sunday, the shrine will celebrate the 100th anniversary, giving each mother attending a special service a white carnation.
The shrine also serves as a "reminder to the accomplishments of these women and to the issues mothers still deal with today, trying to do the balancing act of being everything to everyone," said Cindi Mason, the shrine's director.
'Everyone has a mother'
According to the U.S. Census Bureau, there are 83 million mothers in the United States. More mothers now work out of the home and the number of single-mother households has tripled to more than 10 million since 1970.
What has allowed Mother's Day to become celebrated on the second Sunday in May in 52 countries is "everyone has a mother," said Sally Thayer, a trustee of the International Mother's Day Shrine in Grafton. "It's a wonderful thing to celebrate."
Jarvis' devotion to and her fierce defense of Mother's Day could be tied to the feeling that "a certain era was passing and mothers like her mother were becoming fewer," said Laura Prieto, an associate professor of history and women's studies at Simmons College in Boston.
By all accounts, Jarvis' mother Ann was a community activist who worked to heal the divisions in north-central West Virginia following the Civil War, and to promote improved sanitation by creating Mothers Friendship Clubs.
"I would love to be like Mrs. Jarvis," said Olive Dadisman, who operates the Anna Jarvis Birthplace Museum in nearby Webster. "She was a soft-spoken, gentle woman, but she could convince the devil to give up his pitch fork."
She fought to protect its essence
West Virginia became the first state to recognize Mother's Day in 1910. President Woodrow Wilson approved a resolution in 1914 marking the second Sunday in May a nationwide observance.
"Mother's Day was meant to be — and still is — a celebration of a nineteenth-century ideal of motherhood, when mothers were supposed to dedicate themselves completely to nurturing their children and making a cozy, safe home," Prieto said.
Yet, Jarvis became increasingly disturbed as the celebration turned into an excuse to sell greeting cards, candy, flowers and other items.
Jarvis became known for scathing letters in which she would berate people who purchased greeting cards, saying they were too lazy to write personal letters "to the woman who has done more for you than anyone in the world."
Before she died in 1948, she protested at a Mother's Day celebration in New York, and was arrested for disturbing the peace.
The National Retail Federation estimates that Americans will spend $15 billion this year honoring their mothers. Dining out is expected to be the No. 1 expense.
In the end, Mason said Jarvis was bitter about what the observance had become and "wished she would have never started the day because it became so out of control ..."
"But when you look at Mother's Day as being her baby of sorts, you can understand her protectiveness of it."
Posted by williamkituuka.com at 12:59 AM