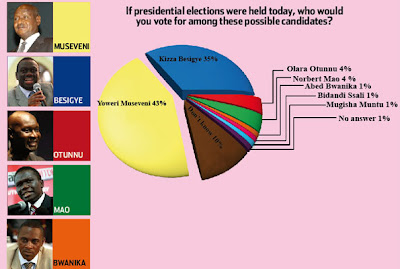 The polls can be conducted with whatever results, but the mood is for a change of Presidency. It is our mistakes that will fail to deliver the needed change. As for a candidate for the IPC, I think in Dr. Olara Otunnu we have a candidate who can help Uganda to make a start on a journey for the 5 years to see Uganda back to the map. If it is not the doctor, another person who can promise real change is Kibirige Mayanja. In FDC leadership, it will be like NRM under another leader. The fact that if good understanding is reached in IPC, any candidate chosen should be capable of getting support to compete favourably for the sake of getting the needed change come 2011 General elections.
William Kituuka

By Monitor Reporter
Posted Monday, May 31 2010 at 00:00
President Museveni would have won the presidential election if it had been held a month ago but he would not have collected enough votes to avoid a run-off, a new poll can reveal.
The poll was commissioned by Daily Monitor and the Deepening Democracy Programme and conducted between April 19 and May 6 by TNS/Research international, an independent global research company.
Asked who they would vote for if elections were held on the day of the interviews, 43 per cent of all respondents said they would vote for President Museveni, while 35 per cent said they would vote for Dr Kiiza Besigye of the opposition Forum for Democratic Change.
Mr Olara Otunnu of the Uganda Peoples Congress and Norbert Mao of the Democratic Party were joint third with four per cent of the respondents saying they would vote for them.
Mr Abed Bwanika (Independent), Mr Jaberi Bidandi Ssali (People’s Progressive Party) and Maj. Gen. Mugisha Muntu, who lost the FDC presidential nomination to Dr Besigye in April, all received one per cent.
Mr Bwanika, who scored less than one per cent in the 2006 election, and Mr Ssali have indicated plans to run in the 2011 election but Mr Muntu is expected to throw his weight behind Dr Besigye after losing in the party primary.
President Museveni, in power since 1986, is seeking a fourth elected term in office and is expected to be nominated by the ruling NRM party as its candidate later this month.
Mr Museveni received 75.6 per cent of the vote in the 1996 election, 69.4 per cent in 2001 and 59.3 per cent in the 2006 election.
Dr Besigye won 27.7 per cent of the vote in 2001 and 37.4 per cent in 2006 but the Supreme Court found widespread irregularities in both elections, the majority in favour of the incumbent.
Tight contest
The latest poll shows a drop in support for both President Museveni and Dr Besigye but suggests that the 2011 election could be the most-tightly contested in the country’s history and could lead to a run-off between the two candidates. According to the Constitution, a presidential candidate must win more than 50 per cent of the valid votes cast at the election.
There is still plenty to fight for, though; one in 10 respondents interviewed in the survey said they did not yet know who they would vote for, suggesting that there is at least 10 per cent of swing voters for candidates to reach out to.
If the 10 per cent vote were to all go to President Museveni, he would climb to 53 per cent and avoid a run-off but should the swing vote all go to Dr Besigye, he would climb to 45 per cent.
This would not be enough for the opposition candidate to win in the first round but it would put him ahead of the incumbent and leave Mr Museveni as the underdog in the run-off.
More than seven out of every 10 respondents interviewed in this survey (73 per cent) said they had already decided on which presidential candidate to vote for in 2011 but only 66 per cent of respondents aged 18 – 25 said they had already decided, suggesting that many youth votes are still up for grabs.

The opposition, under its Inter Party Cooperation, is planning to field a single candidate in next year’s election, although Mr Mao’s Democratic Party says it is unlikely to support the move.

Dr Besigye is favourite to win the slot with six out of every 10 respondents in the survey picking him as their preferred opposition joint candidate while Mr Mao came second with 15 per cent, only slightly ahead of JEEMA’s Kibirige Mayanja on 14 per cent.

Youth vote
The survey reveals some interesting information about voting intentions by age group.
President Museveni leads Dr Besigye in each of the age groups but the gap is narrowest among young voters aged 18 – 25 and largest in the 41-45 age group where 65 per cent of respondents said they would vote for Mr Museveni against 20 per cent for Dr Besigye.
Mr Mao, 43, whose campaign team has tried to reach out to younger audiences through new media enjoys his highest support – six per cent – among the 26-29 age group and his lowest – one per cent – among the 36-40 age group.
Mr Otunnu’s biggest support – seven per cent – comes in the 46-50 age group while his support in the other age groups is between four and five per cent.
Gender politics
Some 42 per cent of all female respondents said they would vote for President Museveni compared to 36 per cent for Besigye. Mr Museveni’s score improves among male respondents to 43 per cent while Dr Besigye’s drops to 34 per cent. Both Mr Mao and Mr Otunnu have the same level of support across the gender divide; five per cent and four per cent respectively.
In keeping with findings of previous surveys, President Museveni enjoys more support in the rural areas (47 per cent) than in urban centres (21 per cent). Dr Besigye has more support than Mr Museveni in urban areas (49 per cent) but has 32 per cent support in rural areas where more than eight out of every 10 voters live.
The opposition candidate also has twice as much support in Kampala than President Museveni, with 44 per cent to 19 per cent of respondents interviewed in the survey.
President Museveni’s greatest support is in the western region, where both candidates come from, with 59 per cent to Dr Besigye’s 35 per cent.
http://www.monitor.co.ug/News/National/-/688334/929098/-/x0a6hb/-/index.html
Posted by williamkituuka.com at 12:17 AM