The Buganda Conference of December 2009 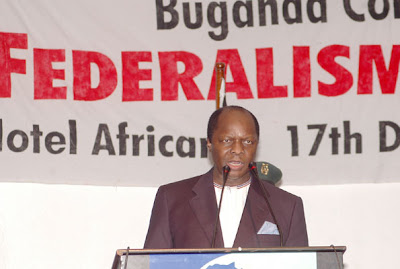 TOUGH TALKING: Kabaka Mutebi addresses yesterday’s conference in Kampala. PHOTO BY STEPHEN WANDERA
By Emmanuel Gyezaho & Al-mahdi Ssenkabirwa
Posted Thursday, December 17 2009 at 22:31
IN SUMMARY
The Kabaka appeared to remove his cultural jacket and don a political one as he made the case for Buganda’s ‘federo’, telling his audience that the 1990’s Justice Benjamin Odoki Constitutional Review Commission had shown a majority of Ugandans were desirous of a federal system of government.
Kampala
Kabaka Ronald Mutebi has restated his kingdom’s demand for a federal system of government and called for mutual respect between Buganda and the central government. In a speech delivered on Wednesday, three months after relations between his kingdom and the government hit an all time low in the wake of riots in September, the Kabaka said dialogue is the only solution to any differences between Buganda and President Museveni’s regime.
“I believe Uganda can accommodate all of us and we can live in peace and harmony,” said the Kabaka. “I also believe that it requires that we should be able to talk to each other honestly and dialogue in an atmosphere of mutual respect. All of this costs us nothing. But it is very priceless. We should never tire to talk to one another,” he added.
The Kabaka was speaking at the second Buganda Conference, launched last year to articulate pressing issues in the kingdom. His comments appeared at variance to consensus generated at the conference where delegates spoke in favour of closing the door to dialogue between his kingdom and President Museveni, with many arguing that past talks had failed to resolve Buganda’s pressing issues.

RELATED STORIES
Government tables Bill to ‘kill’ Federo
Mengo invites government for Buganda’s federo talk
2009 News Makers
“It is important to recognise that members of a family have serious concerns and needs that need to be taken care of. That is how a family can survive and be prosperous,” he said.
The Kabaka appeared to remove his cultural jacket and don a political one as he made the case for Buganda’s ‘federo’, telling his audience that the 1990’s Justice Benjamin Odoki Constitutional Review Commission had shown a majority of Ugandans were desirous of a federal system of government.
“It is clear that from the findings of the Odoki Commission people wanted to have this system,” he said. “That was the authentic voice of the people. So why deny them that right?”
Kanyeihamba salvo
Speaking at the conference, retired Supreme Court Judge George William Kanyeihamba launched a scathing attack on Baganda who have previously worked or those who continue to work with President Museveni and accused them of trading their loyalty to the kingdom for the trappings of patronage.
“They have been content to hold their offices with their attached fringe benefits and have mostly sided with the incumbent administration that is always dominated by non-Baganda,” he said.
“They appear to be very faithful servants and excellent pupils of the Kisoga saying Omwami kya koba nange kyenkoba translated as ‘I will always concur with what my master says”.
Mr Kanyeihamba said the officials who previously had what he described as the “presence of mind and intellectual acumen” had cowardly switched loyalties for the protection of status, survival and personal aggrandisement.
The conference that attracted a cross-section of Baganda, leaders of various opposition political parties, business people and academics, discussed the subject of Buganda’s quest for federo, where ideas where mooted on how the Kingdom can best achieve this dream.
Curiously, no senior Baganda officials serving under Mr Museveni attended the conference, save for Maj. Ronald Kakooza Mutale, a presidential adviser on military affairs.
Finding moment to speak, Maj. Mutale launched a scathing attack on fellow Baganda and said their failure to achieve their desires was partly because some of them are treacherous and insincere.
Although he said he did not want to “wash our dirty linen here”, Maj. Mutaale admitted that the Baganda had “some internal weaknesses” like “being treacherous” and “not being committed to specific issues.”
He went on to say Baganda had failed to understand the meaning of power and how to respond to it, something that riled Makindye East MP Hussein Kyanjo.
“Those insults must stop and I think they are exceedingly unhelpful,” the MP said.
Justice Kanyeihamba warned Baganda against viewing themselves as a special tribe saying perception had brought the kingdom more enemies than friends and advised Mengo to stop demanding for federo from Mr Museveni. “If Buganda is ever to have its way and obtain what its representatives say it desires, they must persuade, cajole, consult and if need be, dance to the tune of the rest of Ugandans,” he said, adding, “Let us demand it from Ugandans not Museveni. If he dies today does it mean that the quest for federalism will end there?”
Forum for Democratic Change leader Kizza Besigye concurred with Justice Kanyeihamba and said the absence of national dialogue was injuring Buganda’s demand for federalism.
“The federo issue no longer needs discussions because Ugandans spoke in the Odoki report and what we require is national dialogue to resolve other national issues,” he said, drawing loud applause from participants.
Mengo implored
Former spy chief David Pulkol implored Mengo, the seat of Buganda Kingdom, to desist from talking about federo as a Buganda issue. “Buganda should stop under-the-table negotiations on Federo. This is a national issue and it should become a campaign tool in the next election,” he said.

RELATED STORIES
Government tables Bill to ‘kill’ Federo
Mengo invites government for Buganda’s federo talk
2009 News Makers
Maj Mutaale summarised Buganda’s key challenges as a failure to distinguish between form and content, means and ends, effects and causes, glory and power, strategy and tactics.
“You need to make a clear distinction of those. I want to see Buganda participating in the power structures and not in the means. Baganda need to distinguish between glory and power. They need to distinguish between the strategy and tactics,” he said.
The Nabagereka Sylvia Nnagginda who officiated at the opening of the conference said unity in diversity would enhance development in the country.
“This discussion should serve as a platform for debate on kingdoms which are the embodiment of our African culture,” she said. “First world countries have succeeded without compromising their identities.”
Democratic Party presidential hopeful and Gulu chairman Norbert Mao said the conference was timely because the country needs consensus based on truth and justice.
“We need a new consensus and this cannot be achieved when regions are not together,” he said, adding: “All regions have had problems in the past and they should not use this time to lament but focus on the future.”
Former Minister Capt. Francis Babu who chaired one of the sessions said Buganda will attain federalism no matter how long it will take.
"I entirely agree with all the previous speakers and the question before us is how can we get the power back from the top down to the people? Capt. Babu asked
“I think its matter of time. Northern Ireland has spent 100 years fighting for liberation and Buganda shouldn’t lose hope,” he added.
Posted by williamkituuka.com at 6:31 AM