No Hunger in countries with democracy 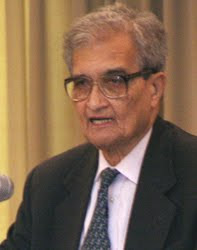 Amartya Sen's Famous Theory Is Being Tested by Starvation in India
Agence France-Presse
Growing reports of starvation are due in part to droughts that have produced parched fields like this one near Chandigarh in Northwest India.

By MICHAEL MASSING
Few scholars have left more of a mark on the field of development economics than Amartya Sen.
The winner of the 1998 Nobel Memorial Prize in Economic Science, Mr. Sen has changed the way economists think about such issues as collective decision-making, welfare economics and measuring poverty. He has pioneered the use of economic tools to highlight gender inequality, and he helped the United Nations devise its Human Development Index — today the most widely used measure of how well nations meet basic social needs.
More than anything, though, Mr. Sen is known for his work on famine. Just as Adam Smith is associated with the phrase "invisible hand" and Joseph Schumpeter with "creative destruction," Mr. Sen is famous for his assertion that famines do not occur in democracies. "No famine has ever taken place in the history of the world in a functioning democracy," he wrote in "Democracy as Freedom" (Anchor, 1999). This, he explained, is because democratic governments "have to win elections and face public criticism, and have strong incentive to undertake measures to avert famines and other catastrophes." This proposition, advanced in a host of books and articles, has shaped the thinking of a generation of policy makers, scholars and relief workers who deal with famine.
Now, however, in India, the main focus of Mr. Sen's research, there are growing reports of starvation. In drought-ravaged states like Rajasthan in the west and Orissa in the east, many families have been reduced to eating bark and grass to stay alive. Already thousands may have died. This is occurring against a backdrop of endemic hunger and malnutrition. About 350 million of India's one billion people go to bed hungry every night, and half of all Indian children are malnourished. Meanwhile, the country is awash in grain, with the government sitting on a surplus of more than 50 million tons. Such want amid such plenty has generated public protests, critical editorials and an appeal to India's Supreme Court to force the government to use its surpluses to feed the hungry.
All of which has raised new questions about Mr. Sen's famous thesis. In an article critical of him in The Observer of London last summer, Vandana Shiva, an ecological activist in India, wrote that while it is true that famine disappeared in India in 1947, with independence and elections, it is "making a comeback." The problem, she added in an interview, "has not yet reached the scale seen in the Horn of Africa," but if nothing is done, "in three or four years India could be in the same straits."
To Mr. Sen, though, it is not the thesis that needs revision but the popular understanding of it. Yes, famines do not occur in democracies, he said in a phone interview, but "it would be a misapprehension to believe that democracy solves the problem of hunger." Mr. Sen, who is the master of Trinity College at Cambridge University, said his writings on famine frequently noted the problems India has had in feeding its people, and he was baffled by the amount of attention his comments about famine and democracy had received. The Nobel committee, in awarding its prize, did not even mention this aspect of his work, he said, adding, however, that many newspapers had seized on it and misrepresented it.
Mr. Sen's views about famine and hunger have recently been put to the test by Dan Banik, an Indian-born political scientist at the University of Oslo. Mr. Banik has spent much of the last several years in India, studying the parched, desperate Kalahandi region of Orissa. In that area alone, Mr. Banik said by phone from India, he found 300 starvation deaths in six months. And they are hardly unique. "I have collected newspaper reports on starvation for six years in Indian newspapers," he said, "and there's not a state where it hasn't happened. Starvation is widespread in India."
He quickly added, however, that the toll was nowhere near the hundreds of thousands that constitute a famine. In fact, Mr. Sen's theory about famines not occurring in democracies "applies rather well to India," he said. "There has not been a large-scale loss of life since 1947." At the same time, he said, "there have been many incidents of large-scale food crises that, while not resulting in actual famines, have led to many, many deaths."