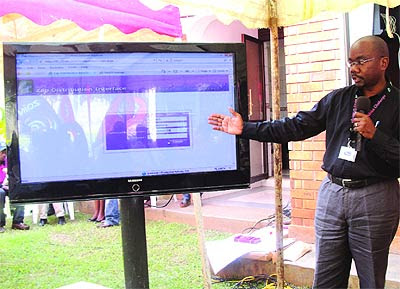 Innovations are welcome, however, it is not clear how this service was sanctioned. It is public knowledge that for quite some years; the Government of Uganda gave MTN and some other two Communication companies monopoly to operate in Uganda. It is not clear how MTN gets involved in banking business when there are already a number of operators. it is equally true that MTN has a number of operators on their network and many times their basic responsibility should be to focus on efficiency in the telecommunications service they offer. And, with the new service, it is likely to attract yet another big numbers to their network and it is not clear how they are to handle this as the other Communication companies may not operate a similar service. It is tricky. It should have been an innovation by those in the banking industry to call for a service that uses the MTN Network, but for MTN to be behind the innovation... I think it is a bit unusual.
William Kituuka


MTN launches Uganda mobile-banking services - Source: http://www.engineeringnews.co.za/article/mtn-launches-uganda-mobile-banking-services-2009-03-10
By: Christy van der Merwe
10th March 2009
Making progress in ‘banking the unbanked’ in Africa, telecoms operator MTN on Tuesday announced that the launch of Mobile Money Transfer (MMT) in Uganda would mark the start of planned launches of the banking function across its operations in Africa and Middle East.
MTN has been piloting MMT services through MTN Uganda and at the group’s West and Central Africa region operations (Cameroon, Ghana, Cote d’Ivoire and Nigeria) since October 2008.
Five additional pilots were recently launched in Benin, Congo Brazzaville, Guinea Bissau, Guinea Conakry and Liberia. The pilots were aimed at waterproofing the systems and operational processes in preparation for the commercial launch.
MTN stated that in each market, it had partnered with local banks to ensure that its MMT services were fully compliant with financial services regulations. Discussions were currently on-going with relevant authorities in various countries to ensure that all regulatory requirements were met, the telecoms giant added.
In South Africa, the product is known as MTN Banking, and is a joint venture between Standard Bank and MTN.
The challenge for the banks has been in their ability to extend their distribution networks to include previously unexplored rural areas where the majority of previously-unbanked-mass-market individuals live.
The use of cellular telephony has been regarded as an innovative way to assist in “banking the unbanked”, particularly in Africa, where banking infrastructure could not reach far-flung rural areas, but cellular phone technology was fairly pervasive.
The product from MTN, called MTN MobileMoney, was punted as a convenient, secure and affordable way for MTN subscribers to send money, buy airtime and pay bills by using their cellphone - whether users have an existing bank account or not.
A person could register for MTN MobileMoney as long as they were an MTN subscriber. Those who did not have MTN Sim cards or a phone could still receive money from MTN MobileMoney users, and send money through a network of agents in their country.
“We believe our MMT offering will make money transfer and basic payments more convenient and more affordable to our subscribers. We acknowledge our partner banks and the banking regulators in our different markets for the enthusiasm and support they are giving us," said MTN corporate affairs executive Nozipho January-Bardil.
Posted by williamkituuka.com at 7:43 AM