Think about Old Entebbe Road; it is in terrible state 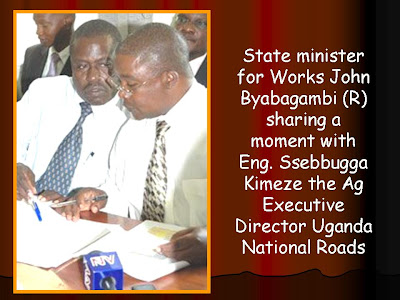 State minister for Works John Byabagambi (R) sharing a moment with
Eng. Ssebbugga Kimeze the Ag Executive Director Uganda National Roads
Authority when they appeared before a parliamentary committee on
Physical Infrastructure on April 28. Photo by Geoffrey Sseruyange
Government to construct new Kampala-Entebbe Road in 2011
Yasiin Mugerwa
Parliament
Plans are in final stages to construct an alternative dual carriage
road to Entebbe Airport in order to ease the traffic load on the
current road at a cost of shs400 billion.
However, government yesterday told Parliament that thousands will face
displacement to give way for the road.
The traffic volume on Kampala-Entebbe Road has increased from 400,000
to about one million people and more than 15,000 vehicles per day in
the past five years.
Eng. John Byabagambi, the state minister for Works, told legislators
on the Physical Infrastructure Committee that a new 300km-road to
Entebbe is scheduled to begin in 2011.
The minister said the road would be a dual carriage.
“We are going to have either four or six lane highway to Entebbe and
it’s going to be about 300km after completion because a single stretch
is about 50km. It’s as if we are going to construct six roads at the
same time but our objective is to have at least six lanes,” Eng.
Byabagambi told the MPs.
He said the ministry was in the process of identifying a consultant
who will kick-start the project and that any property owner who
refuses to give way will be forcefully evicted.
“The Constitution is clear; whoever will refuse to vacate [property]
where this road is going to pass to pave way for the construction,
will compel the government to use force because we need this
alternative route urgently,” the minister said.
The compensation cost and the number of the people to be displaced
will be confirmed by the consultant, who according to sources in the
ministry could start work by the end of the year.
Although the minister told the MPs that the issue of having a new road
to Entebbe was still confidential for fear that unscrupulous people
could take advantage and construct houses in the targeted area so as
to demand compensation, Daily Monitor has learnt that the ministry has
decided to build the new road along Lake Victoria shore areas.
The sources which did not want to be quoted because they are not
authorised to speak on behalf of the ministry told Daily Monitor that
after an internal assessment, the ministry decided to go for an
alternative road route, around L. Victoria instead of expanding the
current Kampala – Entebbe road, after it was found that compensation
costs for the developments around the current road would be higher
than building a new road.
The new road, which will have a beautiful view of L. Victoria and will
link with Ggaba Road around Munyonyo, will reportedly be built with
South African partners and attract a road toll from the users. The
South African partners whom Daily Monitor has not yet identified have
already reportedly made a presentation before the ministry of works.
Mr Byabagambi yesterday: “We are looking at three options; undertake
this project through either a Public Private Partnership arrangement,
to sell the project to financiers (donors) or to use government money
because this road is crucial; the passenger volume on Entebbe road is
worrying.”
The MPs were meeting officials from the ministry of works to discuss
their budget for the financial year 2009/10 in which ministry of
finance has earmarked another Shs1.1 trillion for road construction
and maintenance.
Posted by williamkituuka.com at 2:45 AM