Can President Museveni give other people chance to see other options for the country? 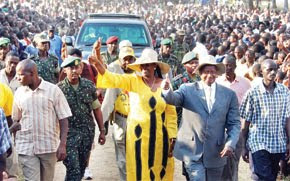 Museveni and wife Janet displaying the NRM symbol in Rwashamire town council
I think we have seen a lot during President Museveni's leadership. My prayer is that it would be wise counsel for His Excellence to give other people chance to take the country from where it is now. The projection does not promise better times.
William Kituuka

I won’t dictate to voters — Museveni - Source:http://www.newvision.co.ug/D/8/13/725931By Anne Mugisa
and Abdulkarim Ssengendo
PRESIDENT Yoweri Museveni has said he will not dictate to the electorate which MPs to vote for in the coming elections.
“When you are electing, nobody should come to you saying I sent him. Vote the one you want. I don’t care who it is as long as they belong to the Movement. All Movementists are mine,” he said.
The President was in Ngoma in Rushenyi county, Ntungamo district on a Prosperity-for-All campaign tour.
Former State House lawyer Justus Karuhanga plans to tussle it out with incumbent state minister Mwesigwa Rukuutana for Rushenyi county MP.
Museveni advised farmers against using the inefficiency of the National Agricultural Advisory Services (NAADS) programme not to engage in productive modern agriculture.
He explained that he had heard that NAADS officials were not helping the people to engage in meaningful agriculture.
Museveni noted that as a result, he temporarily suspended NAADS funds to ascertain what was happening.
He also said anybody who had stolen government money would be “squeezed until they throw it back”.
When help comes from the Government through NAADS, Museveni said, then the farmers can use it to supplement what they already have.
He said every homestead should be able to earn sufficient income from agriculture to fight poverty.
The President urged the people to learn from model farmers in the meantime.
Museveni said he started their family farm along with his father in 1967 without the help of the government.
He said he only observed from the Ankore Ranching Scheme, which had been taken over by wealthy people in the government.
Museveni urged the farmers to practice intensive farming on their small pieces of land to get maximum profit. He advised them to engage in both crop and animal husbandry.
The President also visited several farms, including that of Mrs. Musiime, who rears chicken. She gets sh150,000 a day and an average of sh75m a year from the sale of eggs.
Museveni also said: “I have what to eat. I am in the Government because I want to help Ugandans develop themselves. Mrs. Musiime does that at her backyard now. She does not use a lot of space.”
He pledged to help the people acquire water dams.
Earlier in Kisoro, the President pledged to provide an ambulance to Kisoro Hospital.
He also promised to give incentives to doctors and teachers to go to the district, which is considered a hard-to-reach area.
Museveni also accepted to upgrade Kisoro town council to a municipality.
The President pledged to take water to the mountainous area and also construct a road to connect Kisoro, Kinkizi and Rukungiri.
He said the Government would provide equipment for maintaining roads to all the districts in Uganda. Currently, the Kabale-Kisoro-DR Congo road and the one to the Rwanda border are under construction.
Museveni also promised to consider the request by the people of Murora, Kyahi and Kanabi that they be assisted by the Government because they lost property in the 1994 war between the Rwandan Patriotic Front and the then Kigali government. He said he would consult the Attorney General and the Luwero Triangle minister.
The President urged the youth to stay away from premarital sex to avoid HIV/AIDS.
He noted that Ugandans were hardworking, but engage in traditional methods of production, which only guarantees them food and sometimes little money.
Museveni urged them to engage in modern farming.
Thursday, 15th July, 2010
Posted by williamkituuka.com at 12:11 AM