Nyangasi survived being killed by the locals; he could also survive in court! 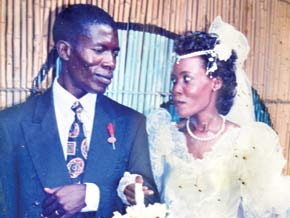 The Nyangasis on their wedding day

On Wednseday, July 28, 2010, Nyangasi was not taken to court to have charges read to him. The problem it is alleged was the medical report with loopholes which were realised hence a request to have another report made. The accused is a Medical Workers' boss and chances that he or his relatives could influence the judgement in the case cannot be ruled out. It is this type of experience that is responsible for increased mood justice. before even the case took off, looks like the information by the police CID and the Doctor who examined the body were not tallying. It will be unfortunate if justice is not done.

Medical union boss held over wife’s death -Source: http://www.newvision.co.ug/D/8/13/727034
Monday, 26th July, 2010
By Andante Okanya
and Darious Magara
THE Police is holding Dr. Apollo Nyangasi, the chairman of the Uganda Medical Workers Union, over the death of his wife, Christine.
George Mpungu, the investigations chief at Kira Police Station, said Nyangasi, 45, a medical doctor working with Soroti Hospital, had misunderstandings with his wife over the control of family property.
“We are holding Nyangasi, who is charged with murder, as we investigate to establish the cause of his wife’s death,” Mpungu said over the weekend.
“The neighbours said the two had a fight on Friday night but at around 6:00am the following day, they (neighbours) also heard a big bang. We want to establish what killed her,” he said.
Addressing journalists at the Police headquarters in Kampala, the spokesperson, Judith Nabakooba, said they were waiting for the post-mortem report to ascertain the cause of her death.
The couple had been together for over 15 years. However, Christine had accused her husband of infidelity, saying he had fathered a 14-year-old-girl outside wedlock.
Nabakooba said Christine, 44, was found unconscious in the bathroom, and rushed to Mulago Hospital, where she was pronounced dead on arrival on Saturday morning.
Nyangasi is a pharmacist at Soroti Hospital, and also the national coordinator of the Health Workforce Advocacy Forum Uganda, a coalition of health professional associations, trade unions and health rights organisations.
Christine’s brother, Kamba Higenyi, said the couple had gone through a long-strained relationship.
He said he tried to reconcile the couple last week and they agreed to stop sharing their marital bed as temporary measure.
Higenyi said they also agreed that Nyangasi would use the marital bedroom, while Christine would stay in the boys’ quarters. A New Vision team visited Nyangasi’s home near Kireka High School in Kampala.
A neighbour, who rented Nyangasi’s house, said he had earlier chased away his inlaws.
“During the fight last night, the doctor told his wife that she would not live to the next day. We are shocked that it has happened,” a neighbour said.
The couple had two children.

Medical workers boss arrested over fraud - Tuesday, June 03, 2008 - Source: http://medilinkz.org/news/news2.asp?NewsID=24017
New Vision, Monday, 2nd June, 2008, Moses Nampala and Faustine Odeke
THE chairperson of the Uganda Medical Workers Union, Dr. Apollo Nyangasi, is detained at Tororo Police Station for allegedly obtaining over sh20m by false pretence.
Nyangasi was arrested in Kampala on Sunday and transferred to Tororo where he allegedly committed the fraud in 2005.
Tororo District Police commander Venn Gaudencio Okumu said: “We are yet to arraign him before court to face charges of uttering false documents and obtaining
money by false pretence.”
Nyangasi in May 2005, the Police said, convinced individuals and groups in Tororo to form a Savings and Credit cooperative Organisation in an attempt to fight poverty.
The victims included Opedede women group, Ryemo Chandi women group, Boke farmers association, Were Amapok women group, UCI small business association, Osukuru progressive enterprise and Osukuru joint association for development, the Police added.
“The victims say Nyangasi implored them to form the SACCO in order to fight poverty as members would access credit for productive activities,” said Okumu.
Nyangasi allegedly claimed that government would easily provide them with a financial boost through the Bonna Baggagawale (prosperity for all) programme aimed at eliminating poverty at the household level.
The would-be beneficiaries paid sh100,000 in membership fees and Nyangasi issued them receipts. “Individuals paid between sh30,000 and sh100,000,” said the DPC.
According to Okumu, Nyangasi told the local people that when the Bonna Baggagawale became effective, they would receive money from the Government and that the pioneers would be given priority.
The police said Nyangasi, after getting the money, allegedly left Tororo and moved to Kampala. “Since then, he has neither refunded the money to the victims nor come back to brief them about the SACCO,” Okumu said.
The alleged victims lodged a complaint to the Police against Nyangasi that led to his arrest.
Nyangasi is also involved in a bitter row with Dr. Sam Lyomoki over the leadership of the Uganda Medical Workers Union. They have accused each other of financial impropriety.
Nyangasi earlier this year said Lyomoki had been suspended as general secretary over financial malpractice. In turn, Lyomoki argued that Nyangasi had been removed as national chairman over unbecoming conduct.

MP Lyomoki, union boss in row - Source: http://www.newvision.co.ug/PA/8/13/614771
Publication date: Monday, 3rd March, 2008
By Charles Ariko
A ROW has erupted between the top leadership of the Uganda Medical Workers Union, with the chairman, Apollo Nyangasi, suspending the general secretary, Dr. Sam Lyomoki.
In a March 3 letter to Lyomoki, who is also a Workers MP, Nyangasi said: “Colleague, you have pushed me so hard to the wall that I am now compelled to invoke my constitutional powers as national chairman to suspend you from the office of the union as general secretary with immediate effect.”
Nyangasi said Lyomoki should be recalled from Parliament for reportedly breaching the workers constitution.
“When we elected you to Parliament to represent us, we did not elect you on the grounds of any political party but to our surprise and dismay, we only read in the media about your scandals in the NRM Caucus, which I think is an executive role putting you in a conflict of interest when you have to defend workers and at the same time speak for the Government.”
In another letter to the Minister of Labour, Nyangasi said Lyomoki was holding three posts, which was contrary to the Labour Unions Act 2006.
He said Lyomoki was the Workers MP, secretary general of the Central Organisation of Free Trade Unions and general secretary of the Uganda Workers Union.
“His wife, Mrs. Margaret Kamondi Lyomoki, is the secretary women affairs yet she is also a member of the national executive committee.
“This is a subject of conflict of interest in the governance of the union. Given that women constitute 60% of the union members, she influences members towards her husband’s interests,” Nyangasi wrote.
However, Lyomoki scoffed at Nyangasi, saying he had no powers to suspend him because he was no longer chairman of the union.
In a February 11 letter to the commissioner of labour, Lyomoki said: “In a meeting held on February 9, the national executive committee suspended Apollo Nyangasi from the office of chairman.”
He added that the vice-chairman, Aggrey Sanya, had been appointed acting chairman of the Uganda Medical Workers Union.
Posted by williamkituuka.com at 11:14 PM