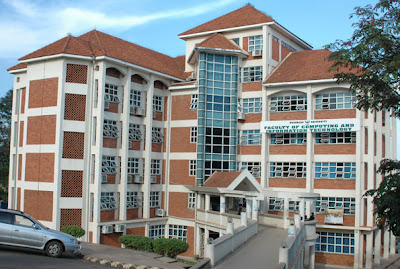 CAPACITY AN ISSUE: Makerere University’s Faculty of Information Technology building. The institution has decried lack of capacity and regional inequity
Makerere University is already oversized. It is wrong to assume that it could even accommodate more students. When a country like Uganda has poor planning infrastructure and the leadership as we have witnessed in the case of NRM does not want to leave the stage, all sorts of imbalances can be expected. Here is a country where the capacity to create increased exports is not well enhanced. Many in responsible positions just want to make ends meet for themselves and the country for a long time has been involved in regional wars. You see the youth leaving higher institutions of learning have no good prospects because the country is simply badly planned. Non priorities like creation of new districts are the priority for the NRM Government which has failed to acknowledge its weaknesses. What Makerere should do is deal wit the numbers that it can afford given the resources, afterall even the funding for the Government students there is war.
William Kituuka

Posted Monday, July 5 2010 at 00:00
Educationists are Makerere University are concerned by the 88-year-old institution’s limited capacity to absorb students, and the domination of schools from central Uganda. While the number of A’ level applicants has doubled over the last 10 years, the university has not increased it’s intake. In 1999, 35,706 candidates sat the Uganda Advanced Certificate of Education examinations. Of these, 22,712applied to join Makerere but only 13,293 or 59 per cent of them were admitted. By 2007, the total number of UACE candidates had risen to 88,383, but only 16,445 or 29 per cent were admitted to Makerere.
A total of 49,915 had applied to join Makerere University, but only 2,030 students were taken on government sponsorship while a further14,415 applicants were admitted on the private scheme. Kyambogo, Mbarara University of Science and Technology, Gulu and Busitema are the other public universities. Makerere is particularly concerned that the same schools have dominated admissions for almost a decade. In a Fact Book, launched last month, the university reveals that schools within Wakiso and Kampala Districts contribute over 70 per cent of all students admitted to the university. For example, in the 2009/10 academic year, just four schools St Mary’s Kitende (18 per cent) Lubiri SS and Namirembe Hillside (11 per cent), Mengo SS (10 per cent) contributed 50 per cent of all students admitted on government scholarship.
In fact, with Naalya SS, Seeta High and Gombe SS, Buddo SS, Makerere College School and Uganda Martyrs Namugongo occupying the rest of the top ten positions, educationists are concerned that rural-based students are getting limited opportunities to higher learning. “We are informing the public that there are certain schools admitting students at Makerere University on government and private. They are only in Kampala and Wakiso. This sends a message to policy makers that something must be done to uplift the standards of schools in rural areas so that they are also able to contribute to the enrollment at public institutions, a dream of every parent,” Makerere’s director of planning and development Mr John Wabwire said. The picture over the last ten years is no different, with Ntare School and Bweranyangi Girls, the only upcountry schools making the list of top 15 in terms of numbers students sent to Makerere. Mr Wabwire said that Ministry of Education should find out what is lacking in areas of facilities, teachers and the processes teachers use to impart knowledge in order to improve the general conditions in schools.
Last academic year, Uganda Martyrs SS Namugongo had 83 students admitted on Science courses only. It was followed by St Mary’s Kitende with 71. Ntare came third with 66 students while King’s College Budo followed with 64. The next 15 schools were all Kampala and Wakiso based schools.
Holistic approach
But in an interview, the Gayaza High School head teacher, Ms Victoria Sserunkuuma said the school continues to put emphasis on co-curricular activities to impart life skills that are important outside the academics. “It is not only important to excel in academics. We put emphasis on co-curricular activities to equip our students for the future. That is why our girls may not get the four As but will excel when they are out there because they have learnt all the values that will keep their heads high,” Ms Serunkuuma said. She added that the school follows it’s alumni and they are always among the best performing students in the universities they join.
“At Makerere, my girls excel. We ensure to deliver professional quality education in order to produce girls for leadership,” Serunkuuma explained. According to Mr Vincent Ekwang, an estimated 15,000 students are expected to be admitted on private scheme in addition to the 2,800 who were admitted on government sponsorship last month. According to the Uganda National Examinations Board (Uneb), out of 96,655 candidates who sat the UACE examinations, 60,370 candidates passed with at least two principal passes, making them eligible for admission into public universities.
SCHOOLS THAT TOPPED 2009 ADMISSIONS
School Govt Private Total
St Mary’s SS Kitende 134 282 416
Namuugongo 86 102 188
King’s College Budo 79 71 150
Nabisunsa Girlsl 74 105 179
Ntare School 59 87 146
St Mary’s Namagunga 50 24 74
Bweranyingi Girls 46 87 133
Kawempe Muslim 41 129 170
Gayaza High School 38 55 93
St Mary’s College Kisubi 38 44 82
Gombe Sec Sch 36 171 207
Naalya SS, Kampala 35 175 210
Blessed Sacrement SS 32 72 104
Kibuli Sec Sch 32 92 124
Namirembe Hillside 32 233 265
Posted by williamkituuka.com at 8:03 AM