Is it true that HIV-Positive Ugandans Turned Away From Clinics in Uganda? 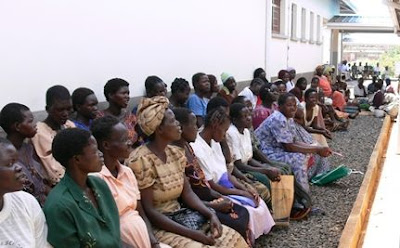 Uganda needs to make right strategies to help patient of HIV/AIDS. It is good that in the past a lot of donor assistance came into the country; the unfortunate bit is when those responsible for distributing medicines for the people living with HIV/AIDS end up benefiting instead of seeing that life of patients is saved.
William Kituuka

Anti-retroviral treatment centers in Uganda are turning away thousands of new HIV-positive patients for lack of resources.
The global financial crisis has hit many sectors hard, and treatment centers are no exception. In addition, aid agencies cite "changing political climates in donor countries." Nearly all of the funding for treatment costs in Uganda and other developing countries comes from the Global Fund to Fight AIDS, Malaria and TB.
Anti-retroviral drugs (ARVs) inhibit the ability of the virus to multiply in the body and are the main hope to prolong lives of those with HIV/AIDS.
Uganda has long been considered a model African country in its approach to fighting HIV/AIDS due to its government initiatives, broad-based partnerships and public campaigns. In the 1990s the country saw a sharp decline in the number of people with HIV/AIDS.
Still, the Uganda AIDS Commission estimates that only 51 percent of those in need are receiving treatment, or 200,213 people, and that every year the list of those in need grows by 100,000.
Dr Elizeus Rutebemberwa of Makerere University's School of Public Health estimates it would take about 4 billion USD to provide treatment to every patient in need. The Ugandan government cut the health budget this year by 14 percent, but considering that the issue is literally a matter of life or death, it would be wise for the government to reconsider their priorities. The government should not have to do it alone, but it still needs to be the backbone of Uganda's fight against HIV/AIDS.
Posted by williamkituuka.com at 3:34 AM