It surprises that Mr. Vincent B Ssekonno has appointments during NRM administration 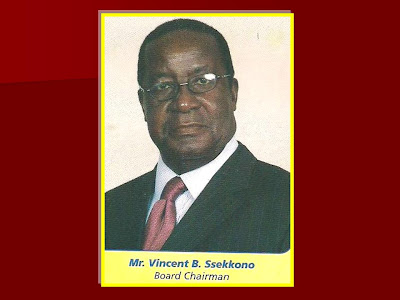 Mr. B. Ssekonno was the boss of the Electoral Commission during the 1980 greatly disputed elections; as it is believed that the electoral commission altered results at the time hence UPC ended up taking the victory of the Democratic Party! It is this major reason that those who went to the BUSH in 1981 advanced as the major cause for the war so as to rectify the situation.
If the above reasoning is true, it defeats simple logic how the NRM Government could deploy/employ Mr. Ssekonno whose role at the time is believed to have been party to the reason why the war was wagged. Remember that war claimed so many innocent lives, a lot of property was lost and some parts where it was 'staged' have never recovered. Mr Ssekonno is former Permanent Secretary Ministry of Local Government and noe Board Chairman National Social Security Fund!
William Kituuka 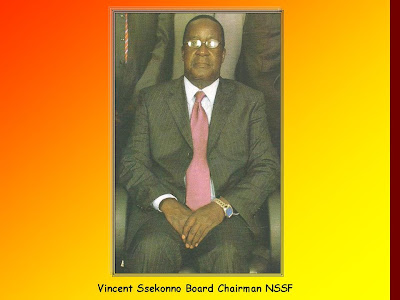 Uganda: Local Gov't PS Vincent Ssekkono Retires
The Monitor (Kampala)
Alfred Nyongesa Wandera
28 September 2008
Kampala — After several years of service as Permanent Secretary in the Ministry of Local Government, Vincent Ssekono has called it quits.
Mr Ssekono is famously remembered as the former Electoral Commission Secretary who presided over the controversial 1980 general elections.
He fled the country after the then Military Commission Chairman and de facto President of Uganda; Paul Muwanga stopped him from announcing the poll results.
The Military Commission was the transitional government that organised the chaotic elections. Mr Ssekono presided over the elections that observers said were marred by massive rigging. President Yoweri Museveni, then Vice Chairman of the Military Commission vied for presidency as a candidate for Uganda Patriotic Movement.
Mr Museveni's party got only one parliament seat in the poll.
Mr Muwanga, who was a UPC diehard, issued a warning that the results of the polls were only to be released through his office.
The Uganda Peoples Congress was later declared winner in an election that was widely believed to have been won by the Democratic Party. Mr Vincent Ssekono, 62, has served for nine years in the Local Government Ministry. He joined the ministry on a contract basis.
Mr Ssekono, stayed in UK for seven years and on return to Uganda, worked as secretary in the Ministry of Health and in the Vice President's office before joining the Ministry of Local Government

NSSF loses sh23b in Safaricom shares
Wednesday, 4th November, 2009
By Madinah Tebajjukira
THE National Social Security Fund (NSSF) lost sh23b in a Kenyan telecom company investment, top management has revealed.
The acting managing director, Martin Bandeebire, yesterday said in April last year, NSSF bought 238,200,100 shares from Safaricom, at sh44b hoping to make profits.
However, a fall in the price of the shares by 30% led to the sh23b loss.
Appearing before the parliamentary committee on commissions, statutory and state enterprises, Bandeebire revealed that the decision to invest in Safaricom was approved under the leadership of Edward Gaamuwa, who was the board chairman.
The new board chairman, Vincent Ssekono, told a committee chaired by Reagan Okumu that though NSSF incurred losses, the company retained its shares in Safaricom.
He said chances are high that the loss will be offset this financial year.
“The stock exchange is a gamble. Many people invest and get losses but they don’t lose hope. That is business,” Ssekono said.
He asserted that, the board would carefully scrutinise any other investment plans.
“This is a lesson, but we can’t stop investing because the workers money needs to multiply,” he said.
Ssekono’s explanation angered the legislators who insisted that whoever initiated and approved the deal should be held responsible.
Ssekono said it was not only NSSF which made a loss but even other multi-international companies and individuals.
Safaricom’s share price dropped in June at the time when most companies bought shares at Ksh5 but later dropped to Ksh3.5.
“I think it is going to take some time before we see the share price return to what it should be. We have to wait for stability to return to world stock markets,” Safaricom chief executive Michael Joseph said.
He attributed the loss to the global economic crisis.
NSSF board and management had appeared before the committee to respond to management issues and to update them on plans to clean the fund’s image.
During the same meeting, Ssekono told the legislators that NSSF has obtained the land titles of the controversial Temangalo land, but it had no plans to develop it in the near future.
Though it is not the mandate of NSSF to clear the sitting tenants, Bandeebire said the fund is still faced with the problem of the Temangalo tenants demanding compensation.
He noted that the fund was more interested in developing the 560 acres in Lubowa, which were considered to be more prime than the land at Temangalo.
In Lubowa, Ssekono said NSSF intends to construct 2,000 housing units for sale.

Ssekono should know where his power begins and ends
Tuesday, 8th December, 2009
E-mail article E-mail article
Editor—The recent statements by the NSSF board chairman, Vincent Ssekono, carried on NSSF’s website that workers should not access their savings until they are 55 years old is not only annoying but uncalled for. Ssekono should know where his power begins and ends.
His work is to manage the NSSF and not to legislate. That is the work of Parliament. It is even more annoying for him, who has for long been a civil servant and does not own a cent in NSSF, to make such irresponsible and insensitive statements.
After getting his pension and gratuity as a permanent secretary and getting another job as NSSF chairman, his statement can only be interpreted as gloating!
Is he aware of Uganda’s life expectancy or is he just guessing to make such statements?
I urge Workers’ MP Sam Lyomoki and the entire Parliament to go on and pass the Bill allowing workers to access their savings when they are still alive and energetic enough to invest it. Ssekono need not worry about that as his fat sitting allowances will still be available since we
contribute billions of shillings every year at the pleasure of the powers that be.
Tema Kafeero
Nansana

NSSF chairman cancels IT tender: Source - http://www.iknowuganda.com/news/newsdetails.php?newsid=897
The new National Social Security Fund Board Chairman, Mr Vincent Ssekono, has started off his reign by cancelling a multi-million IT tender awarded by the previous board. Mr Ssekono in a May 28 letter to NSSF acting Managing Director Martin Bandebire said the contract for maintenance of the Fund’s Integrated Management Information System be advertised, ending the engagement of M/s Comtel Integrators Africa Ltd contracted by the previous board. NSSF has invested more than $ 6 million (approx. Shs12 billion) to build the Integrated Management Information System (IMIS) an IT support system used to keep sensitive information on workers savings and the Fund’s investment portfolio. Mr Ssekono’s position came after Mr Bandebire on March 6 wrote and got approval of the Public Procurement and Disposal of Public Assets Authority to award the $900,000 (about Shs2b) maintenance tender to Comtel, which had earlier installed the IMIS. Comtel which currently runs the system was through a competitive bidding process contracted by NSSF in November 2006 to do a diagnostic study at $430,000 (about Shs955m). Suspended NSSF Managing Director David Chandi Jamwa after getting clearance from the previous board directly contracted Comtel to implement the required changes at $ 5.4m (about Shs11b), an arrangement that attracted criticism from the PPDA. That contract ended in August 2008 but the NSSF managers retained Comtel to run the system . But Mr Ssekono’s latest position is in disagreement with the acting managing director who said when he wrote to the PPDA on March 6 that procuring a new consultant could lead to the collapse of the system. The board chairman’s position could leave the trillion Fund with another legal dispute following a Shs30 billion claim by construction company Alcon International whose contract to build Workers House was terminated in 1998 following shoddy work. That dispute is still before court. “This approach of direct procurement would be more cost effective as procuring a new service provider would set us back as the new consultants would have to refresh on the past problems, familiarise themselves with the current unique systems before they can provide maintenance services,” Mr Bandebire’s letter reads in part. He added: “NSSF cannot afford any more delays on the maintenance because of the risks involved in maintaining the delicate IMIS system and given the heavy investment cost already incurred.” In a May 8 letter, PPDA boss Edgar Agaba wrote to NSSF and granted a waiver on the argument that: “The application by NSSF to directly contract M/S Comtel for maintenance services of the IMIS is granted for one year. The approval is based on the need to safeguard the data and past investment incurred by NSSF on behalf of the workers in the IMIS to avoid a situation of different service provider trading excuses or blaming M/s Comtel Integrators Africa Ltd for design faults.” In his May 28 letter, Mr Ssekkono rejected Mr Bandebire’s arguments and instead ordered that the deal be opened for competition, leading to advertising of the tender on June 4. The new NSSF Chairman wrote: “I have carefully studied the letter and the views of Executive Director of PPDA. I would strongly advise that you advertise the procurement for a consultant to maintain the IMIS and invite bids using a competitive bidding method.” Disagreeing with Mr Ssekkono, Mr Bandebire explained that the request to use direct procurement was approved by the NSSF Executive Committee during their 97th meeting on January 14 and the NSSF Board of Directors in their 72nd meeting in December 2008. Daily Monitor failed to speak to Mr Ssekono. The NSSF Board chairman was not picking his calls on Saturday and Sunday as did the Comtel boss Ken Lubega. Under the new IMIS system, NSSF will be able to use e-mails which are more effective than delivering members’ fiscal information by post as paper statements in order to perk up efficiency. Prior to the IMIS technology, NSSF was issuing paper statements to its members on a regular basis and on request by walk-in members. However, issuing e-statements will enable efficient delivery of statements to members and also reduce transport costs.

MPs want PS Ssekono’s salary attached over sh2b: Source - http://www.etop.co.ug/detail.php?mainNewsCategoryId=4&newsCategoryId=84&newsId=622727
THE local government permanent secretary, Vincent Ssekono, risks losing his salary if he does not account for sh2.3b by 5:00pm today, reports Mary Karugaba.
The money was unspent balance for the financial year 2005/06. It was supposed to be returned to the Treasury.
MPs on the public accounts committee discovered that Ssekono had only transferred sh272m.
“Where did you put the balance? This is a lot of money,” committee chairman Nandala Mafabi said.
He told Ssekono that if he did not account for the money, the committee would sign a warrant demanding he pays it from his salary.
Ssekono and his principal accountant, Patrick Wamanyara, could not explain why the money was not returned to the Consolidated Fund.
Accounting regulations state that money not utilised by a ministry at the end of every financial year should be returned to the Treasury.
Wamanyara said the statement the MPs were reading had mistakes, which were corrected by the Accountant General, Gastavio Bwoch. But the statement had Wamanyara’s signature.
He attributed the problem to the new accounting format issued by Bwoch, forcing MP Frank Tumwebaze to wonder how the format could influence figures.
When MPs insisted, Wamanyara produced “correct” documents, which still had a difference of sh2.3b.
“Bwoch should be contacted to clarify,” Wamanyara said.
Although Ssekono asked for more time to account, he was only given hours.
“The money was passed through you. The Constitution gives you the responsibility to account, what should be done in case you fail?” Mafabi asked.
Posted by williamkituuka.com at 11:09 PM