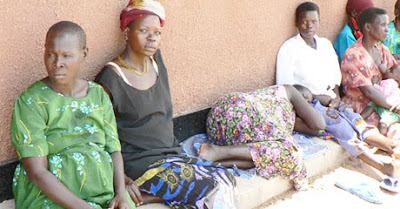 Women waiting to get medical attention at a rural health centres in Uganda. FILE PHOTO of the Monitor
While there is increasing concern about women health care, the women need to be educated much more about family Planning. Today, all parents are workers. It is wrong for those women who are there to compete in producing children or producing like they were Guinnea Pigs. Women have the challange to ensure that they can manage to look after the children they deliver as there are many shock waves in families which lead to vulnerability of children, hence the the women should produce the number of children within their means to manage in case they end up single parents, hence the need to earn income.
William Kituuka

Why Must Women Suffer for Giving Life? - Source: http://allafrica.com/stories/201007191489.html
Agnes Odhiambo
19 July 2010
Nairobi — Africa places a high premium on childbirth and motherhood.
And so it is fitting that the theme of the AU summit in Uganda this week is "Maternal, Infant and Child Health and Development in Africa."
Yet, a decade after governments - including African governments - made a commitment to reduce maternal mortality by 75 per cent and to provide universal access to reproductive health care by 2015, hundreds of thousands of African women and girls die each year while giving birth.
Sub-Saharan Africa is one of two regions, the other being South Asia, where the vast majority of all maternal and child deaths occur.
Africa lags behind other regions in making pregnancy and childbirth safe.
More than half of global maternal deaths occur in Africa.
A study recently published in the medical journal The Lancet found that about 343,000 women and girls around the world are estimated to have died in 2008 from pregnancy and childbirth-related causes, the majority of which are preventable.
More than half of all deaths of pregnant women or new mothers were in six countries, four of them in Africa.
African women also suffer disproportionately from childbirth injuries.
One of the most devastating is obstetric fistula, which results from prolonged obstructed labour and causes constant leakage of urine and faeces. It requires a surgical repair.
Obstetric fistula causes infections, pain, and odour.
Women who suffer this injury often are stigmatised and cut off from family, work and community life.
The full global extent of this problem is not known, but the World Health Organisation estimates that two million women and girls currently live with fistula, and roughly 50,000 to 100,000 are affected every year, mainly in sub-Saharan Africa and Asia.
In East Africa, about 6,000 to 15,000 fistulas occur annually, with wide in-country variations.
In Ethiopia 9,000 and in Kenya 3,000 women - most of them very young and from rural regions - get fistula every year. Fistula hardly exists in the developed world.
There is no shortage of declarations and commitment on paper to promoting maternal health.
There is the Protocol to the African Charter on Human and People's Rights on the Rights of Women in Africa (Maputo Protocol), the African Roadmap for Accelerating the Attainment of the MDGs related to maternal and newborn health (MNH Roadmap) adopted by over 40 countries, and the Maputo Plan of Action on sexual and reproductive health and rights.
Last year, the African Union began a campaign for accelerated reduction of maternal mortality in Africa (CARMMA), with the slogan "Africa Cares: No Woman Should Die While Giving Life."
It also declared this decade African women's decade.
During this summit, African governments need to ask themselves again why, despite these commitments, women and girls in Africa continue to die preventable deaths or suffer devastating injuries while giving life.
African leaders need to account to the continent, and especially to its women, on what they are doing to guarantee the right to a healthy pregnancy and a safe delivery.
Agnes Odhiambo is a women's rights researcher for Human Rights Watch based in Nairobi.

"Africa cares: no woman should die while giving life"
The 15th Ordinary Session of the Summit of the African Union (AU) will be held in Kampala, Uganda from 19 to 27 July, under the theme "Maternal, Infant and Child Health and Development in Africa". In an interview with New African, the AU Commissioner for Social Affairs, Bience Gawanas, explains why this theme was chosen and its significance, bearing in mind there are just five years to go before the Millennium Development Goals (MDGs) deadline.
New African: Health in general is an important aspect of Africa's development. So why will the Heads of State be discussing "Maternal, infant and Child Health and Development in Africa" at next month's summit?
Commissioner Gawanas: The AU's health programme has been very, very broad and we really focus on issues such as HIV and Aids, malaria, TB and other communicable and non-communicable diseases, we have also focused a lot on strengthening health systems and we have produced quite a lot of policy instruments over the years. For example, the Africa Health Strategy, the Africa Regional Nutritional Strategy and so on. But we have realised that something was amiss in our health strategies--and that is the state of maternal, infant and child health, which are issues absolutely connected to the MDGs. We have seen many reports which say Africa is falling behind in terms of realising the MDGs, especially numbers 4 and 5 which pertain to women and children, and Africa and the AU especially is now bringing this matter to the fore in a broader way than we have done before.

By Evelyn Lirri
Posted Saturday, July 31 2010 at 00:00
After a decade of disappointing progress to cut maternal and child deaths, African leaders this week resolved to try again. Concluding the African Union Summit in Kampala on Tuesday, heads of state adopted new resolutions and declared that maternal and child health will remain a standing agenda item for the Union over the next five years-to 2015, which is the deadline to achieve the Millennium Development goals.
More than 500,000 women still die every year in childbirth across the globe, with majority of the deaths occurring in developing countries in Africa-where health systems are weak or non functional and health workers are scarce.
Another 12,000 children-about eight children every minute, including two newborns die on the African continent everyday mainly from treatable conditions like malaria, pneumonia, diarrhea and respiratory tract infections.

Gloomy picture
The grim statistics have persisted despite endless declarations and promises made by governments in the past to tackle the problem-one of the declarations made 16 years ago in Cairo, Egypt agreed to reduce maternal, child and infant mortality in Africa and also increase access to sexual and reproductive health services including family planning.
The picture is not any better in Uganda where maternal mortality stands at 435 for every 100,000 births while under five mortality rate is 76 per 1,000 births.
But to date, efforts to reduce both maternal and child deaths have been slow or off-target-a situation Malawian president and chair of the AU, Mr Bingu Wa Mutharika described as a shameful crisis.
In Africa, one in every 16 women dies in child delivery compared with about one in 8,000 women in the developed world. “Let this not be another song that we are going to sing and forget when we leave this hall. The crisis of maternal mortality is real and we must all take action,” Mr Wa Mutharika said.
He said it was a shame to see African mothers still dying of easily preventable causes
“Africa’s progress in reducing maternal and child deaths is still slow and today we see more children and women dying needlessly of preventable causes than of conflicts,”said Mr Jean Ping, the chairperson of the AU Commission.
For every woman who dies because of pregnancy related complications, at least 20 others suffer injuries and disabilities, like obstetric fistula. In Africa, complications during pregnancy and childbirth are the leading cause of death for women of childbearing age.
Family Planning
According to Dr Hassan Mohtashami, the deputy representative of the UN Population Fund (UNFPA) in Uganda, women continue to die of simple causes that have been resolved easily elsewhere using cost effective interventions. “Ensuring access to family planning services is one way we can reduce maternal deaths. It’s a simple calculation; the less number of pregnancies, the less chances for death,” he says.
According to him, family planning alone can reduce by a third, the number of women who die every year because of pregnancy related complications.
Cheap intervention
Another cheap intervention, he says, is having a midwife present during delivery. “If you have a skilled health worker with a mother during delivery, it will help her to detect if there is any complication and immediately do something to save the life of the baby and mother.”
This, intervention, he said, has the potential of saving another one-third of the deaths, meaning that the two interventions have the potential of saving up to two-thirds of women who would otherwise have died
“The remaining can be saved by Emergency Obstetric Care. If a mother needs specialised and sophisticated care by a doctor like caesarean and blood transfusion, then there should be a centre equipped with these facilities where mothers can be referred,” said Dr Mohtashami.
This strategy, he says, was used by Sri Lanka which has the same economic status with many sub Saharan African countries but has now managed to reduce its maternal mortality to 27 per 100,000 live births.
Prohibitive factor
But challenges still abound in most African countries including Uganda. One of the biggest obstacles to reducing maternal deaths here is the shortage of health workers and poor health infrastructure.
To meet the MDG target, Uganda needs to reduce its maternal mortality rate to 132 per every 100,000 live births by 2015- a target that already looks far from being achieved. One of the resolutions made by the heads of state is to strengthen health systems and make childbirth health care services free for women and children under the age of five. Women advocacy groups had argued that cost was a prohibitive factor for many women and had resulted into a number of them giving birth at home without a skilled attendant.
Ms Bience Gawanas, the commissioner for social affairs at the AU said that she hoped that with the heads of state taking a lead on reducing maternal mortality, much more progress will be made in the run up to the 2015 deadline.
Posted by williamkituuka.com at 11:27 PM