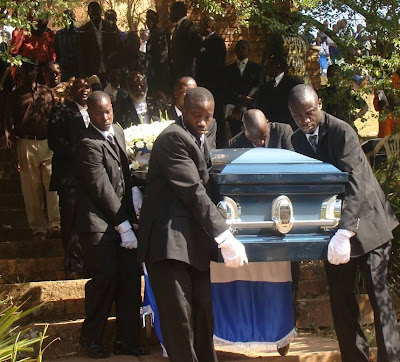 LADY DAMALIE LAID TO REST
The late lady Damalie Kisosonkole has been laid to rest with a call on everyone in Buganda to work towards stabilizing this Kingdom.
Lady Damalie, the former Nnaabagereka to the late Sir Edward Muteesa II passed away on Monday 12th July 2010 at Nakasero Hospital.
The funeral service was led by the Bishop of Namirembe Diocese The Rt. Rev. Wilberforce Kityo Luwalira and The Rt. Rev. Evans Mukasa Kisekka Bishop of Luwero Diocese was the preacher. The former prelate of Mityana diocese Bishop Danstan Bukenya was also in attandance. The Rev. Canon James william Ssebaggala is the Bishop elect of Mukono Diocese.
In his speech during the funeral service at Namirembe Cathedral, Katikkiro Eng J.B. Walusimbi revealed that a few days before her death, the late Damalie appealed to him to ensure that all efforts are geared towards stabilizing the Kingdom.
Katikkiro therefore urged all mourners to fulfill her will by uniting strongly towards one common goal.
Walusimbi noted that the late Damalie will always be remembered for her uprising against the Europeans who had exiled her late husband Sir Edward Muteesa II.
She mobilized the women to revolt against the Europeans and to boycott all imported clothes from European countries and opt for the backcloth. She succeeded in turning the women against the Europeans and forced them to return her husband back home.
Her children described her as a loving mother who had the ability and wisdom which helped her raise them properly despite the challenges she encountered.
Rt. Archbishop Mpalanyi Nkoyoyo advised the Kingdom to unite especially in this trying moment to exhibit their solidarity.
Namiremebe Cathedral was also commended for its efforts in leading the late spiritually and proving hostage to the former Nnaabagereka when she was released from Luzira Prison where she had been taken by the Obote regime.
Having been the first president of the girl guides in Uganda, the girl guides described her as an exemplary grandparent who won all her challenges.
Princes Bagaya of Tooro also described lady Damalie as a loving mother and that the Kingdom and the country have lost a great treasure in her.
She advised everyone to emulate her good qualities since they were developmental to the whole country.
In his message read for him by the Prime Minister Apollo Nsibambi, President Yoweri Museveni also described the late as a strong woman who championed the campaign to develop the women.
He noted that lady Damalie also lead an intensive campaign against polio when she mobilized parents to immunize their children.
The service was presided over by the former Bishop of Mityana Evans Kiseka and attracted most of the clerics in Uganda including His Eminence Cardinal Emmanuel Wamala, the Archbishop of Kampala Diocese Dr. Cyprian Kizito Lwanga, Rt Archbishop Mpalanyi Nkoyoyo, Jackson Matovu, Dr. Michael Ssenyimba, Wilson Mutebi, Samuel Kefa Kammya, James Ssebalagga, and Rev Fr Joseph Ntuuwa Kazibwe among others. 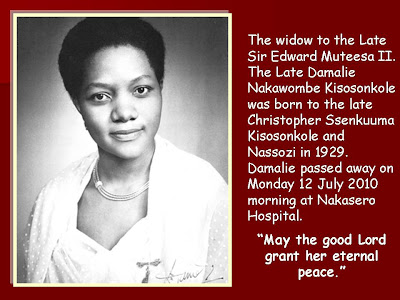 Damalie went to Buddo Junior School, Kings College Buddo and later joined Shabon College in Great Britain as the first African to this college.
In his book, ‘Desecration of my Kingdom’, Mutesa said he met Damalie at King’s College Budo, where they were both students. The two were married on November 19, 1948.
She got married to the late Sir Edward Muteesa II in 1948 at Namirembe Cathedral where they were joined in marriage by Bishop C. Stewart. They later hosted their guests at a lavish reception outside Mengo palace.
She is survived by two children including Princess Dorothy Nassolo who works as an under secretary in the ministry of health and Prince Henry Katabazi Kalemera who is living in the United States of America and works with an airline company in the UK. Damalie’s younger sister, Late Sarah Kisosonkole, is the mother of Kabaka Ronald Muwenda Mutebi.
Kitalo nnyo eri Uganda, Obuganda bwonna, Mugema, Ekika kye Nkima, Abambejja n'Abalangira, AbeNyumba ya Kisonkole, Omumbejja Dorothy Nnassolo n'Omulangira Henry Katabaazi Kalemeera, ne Sabasajja Kabaka Mutebi.
Nnabagereka Damali Nakawombe amaze omulimu gwe mu nsi muno era awunguse amayengo gensi eno. Omukama, Ddunda amuwe ekiwummulo ekyemirembe.

My heart grew hot within me,
and as I meditated, the fire burned;
then I spoke with my tongue:
"Show me, O LORD, my life's end
and the number of my days;
let me know how fleeting is my life. You have made my days a mere handbreadth;
the span of my years is as nothing before you.
Each man's life is but a breath.
Selah (Psalm 39:4-6)