The NRM Government cannot leave traffic jams the way they are 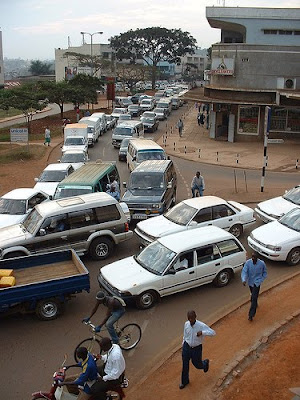 Traffic Jams in Kampala mostly in the evenings are a clear reflection of the poor planning or no planning by the NRM Government. It disturbs to see that vehicles (taxi's) can be stationery for up to 15 minutes or more!
Given the culture now in Uganda of terrorism is on the rise due to degenerated morals and frustration among other reasons, the Government cannot afford to leave the status quo as it is. As a starting point, Government should ensure that there is patrol Police on foot to counter possible criminal acts that can lead to big loss of life.
2ndly, Government should immediately implement a policy of having taxis divided into two; the city and up - country commuters. Meanwhile land should be acquired for parks out of the city to immediately implement the plan.
William Kituuka

Southern Bypass - Source: kampala.ver http://kampalaver.wordpress.com/
As argued before, Kampala’s South faces a structural accessibility problem. While the North has a three-layered system of ringroads surrounding the city centre, the South has pretty much none. This leads to all traffic using Entebbe Road and subsequently getting stuck at Clock Tower.
What is needed in the longer term is a mirroring of the three northern semi-circles.
Ring 1: Connects Clock Tower and Wandegeya be means of ‘Canal Street‘, a dual carriageway on top of Nakivubo Channel.
Ring 2: Serving as the equivalent to Lugogo Bypass, this Southern Ringroad starts at Lugogo Shopping Mall, passes through Muyenga, Kansanga, Makindye, Natete, Mengo and finally ends at Wandegeya junction.
Ring 3: The Northern Bypass is currently being completed and is due to be opened this year. It is likely to have a major impact on central Kampala because all heavy-duty through-traffic will be able to avoid the city. At a much later stage, the same should happen to the South 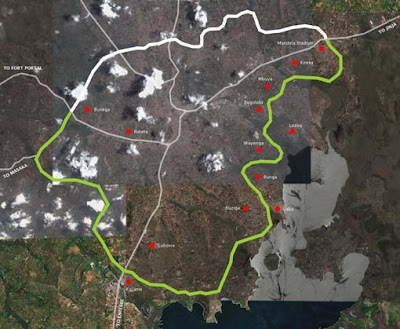 Similar to the Northern Bypass, most of this road will be on a new alignment. It commences at Mandela Stadium, passes Kireka, Mbuya and Bugolobi to their South and crosses the swamp towards Muyenga. It swings around Bukasa before joining Gaba Road North-West of Bunga. It then continues to Munyonyo, crosses the swamp and follows an existing road towards Lubowa. In Kajjansi the bypass crosses Entebbe Road. From there, it runs through the valleys until it joins Masaka Road and subsequently the Northern Bypass in Busega.
Dr Kiggungu Amin Tamale is an Urban Planner, a consultant with the Uganda Management Institute and a Makerere University lecturer. He also is the acting president of the Uganda Public Transport Users Association (UPTUA) – (yes, it exists!). In a recent Observer article – ‘We can return sanity on our roads‘ – he analyses Kampala’s traffic mess.
He argues that currently ‘in Kampala, about 23,813 man-hours are lost each day by commuters due to traffic jam and the lack of an efficient transport system’ and that Kampala therefore needs to be turned into a public transport-dependent city (as opposed to the current car-dependency). The introduction of a well-regulated public transport system would not only have a positive economic impact because people don’t waste half of their day in traffic jams, it is also likely to save energy and significantly enhance the city’s living quality.
The extra-terrestrial example of Curitiba shows that this can be achieved in the context of a developing nation, without massive infrastructural investments. It needs a) intelligent leadership; and b) a Bus Rapid Transit (BRT) system.
The first one, I don’t know.
The second is achieved by identifying five or so corridors in and out of the city centre and turn them into arterial roads. Their road reserves need to be widened in order to make room for a dual carriageway and bus-only lanes in either direction. Because, as Dr Kiggundu Amin Tamale observes,
Another failure relates to the regulation of mixed traffic – that is, boda boda (motorcycles), bicycles, private cars, trucks and mini-buses, all using the same road – in Kampala. Due to this muddled policy of mixed traffic, transport services in most parts of the city continue to be poor and inadequate, especially during peak hour periods.

This is how a well-functioning arterial road could look like. At its centre, it has a green strip, nicely maintained and lined with trees. Then comes a dual carriageway used by private transport. The next lane is the Express Bus lane, separated from the main road by another green strip. Then comes the Boda Boda and Bicycle lane. Last is a pedestrian walkway. (Open drainage channels that can only be crossed deploying impala-like acrobatics are nowhere to be seen. In fact they are hidden underneath the pedestrian walkway.)
Every 1.5km or so, there are Bus stops. Wherever they occur, a paved strip marks a pedestrian crossing. An arterial road is not a highway; therefore, the necessary separation of functions has to be carried out in such a way that it doesn’t disintegrate the city by creating unsurmountable barriers.
The total road width amounts to 32 metres. Currently, Jinja Road seems to be Kampala’s only road that is wide enough to cater for such a road design without any large-scale demolition.
Posted by williamkituuka.com at 12:39 AM