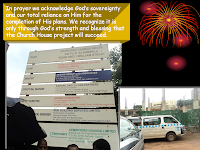 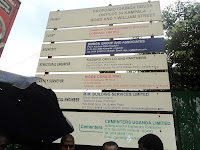 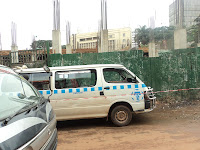 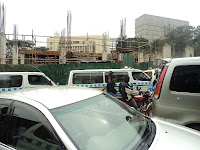 Church House Takes Off After 40 Years
Ephraim Kasozi and Emmanuel Mulondo
8 April 2011
After 40 years of fundraising, construction of the 15-storey Church House building in Kampala has started. The construction work by Ms Cementers (U) Ltd is slated to last 18 months and will cost believers $16.3 million (Shs40.75 billion).
"The Church invested the money obtained from previous fundraising efforts into viable ventures and is now using returns from these investments to begin the construction process," the Archbishop of the Church of Uganda, Henry Luke Orombi, said yesterday during a tour of the site on Kampala Road by a team of bishops.
However, he noted that the Church of Uganda through the Board of Trustees is in the process of negotiating a loan facility with selected financial institutions to secure funding.
"Whereas the construction work has begun, we have not attained all the funding to complete this project."
The archbishop also disclosed that at the moment, the church trustees were selling some of the mission's properties that have not been making good returns and the proceeds would go into financing the project.
Participants commended
Flanked by all bishops of the Province of the Church of Uganda, the Archbishop commended all involved and appealed to believers to support the work through their respective dioceses, which are entitled to buy shares in the project.
"The dioceses will enjoy a return on their investment once the project is complete," said archbishop Orombi.
The Church of Uganda has found an American investor willing to partner in the long-delayed Church House project.
The Church of Uganda Provincial Secretary, Reverend Aaron Mwesigye, declined to name the American investor, but says that with his support, the construction of the 10-storey Church House begin in July this year. He says work on the building, which was commissioned in February 2003, was delayed because the Province had only raised 720 million shillings, which was insufficient for substantial construction work.
The estimated total cost of the Church House Project is 25 billion shillings.
The American investor arrives in Uganda next week to discuss the terms of reference regarding his partnership.
Late Archbishop of Uganda, Janani Luwum, initiated the Church House project to serve as an income generating venture and a means to guarantee the welfare of clergy and lay workers in the Anglican Church. Church of Uganda clergy and staff are poorly paid and retire without any pensions or benefits.
Archbishop Luwum laid the foundation stone of the Church House in 1977 during celebrations to mark 100 years of Christianity in Uganda.
The project has been fraught with accusations of mismanagement and misappropriation of funds. For the past 30 years the Church of Uganda has been fundraising for the Church House, but with little to show for it.
Reverend Mwesigye, who also serves as the Chief Accounting Officer of the Province of the Church of Uganda, admits that financial impropriety may have led to the delays. He is however optimistic that the problem has been overcome by the current church administration and expects the project to be complete within one year.
Posted by williamkituuka.com at 1:54 AM