DID THE POLICE HAVE TO ORDER TRAVELLERS OFF BUSES BEFORE IMPOUNDING THEM?

It is sad if true at all that the Police had to order travelers off the buses so that they get alternative means of transport. What the Police should have done is to wait for the buses at the parks and instruct them not to load passengers. There are things which authorities in Uganda do too late and only inconvenience the public. If a passenger has paid money to a bus company and it is not your business that he has paid for the journey and only get him off, is most unfortunate. Just today,while is a taxi,one passenger was talking about how his friend could get a driving permit without the need to be examined,etc. It is the corrupt ridden system we have to live with for sometime that is partly to blame for deaths onour roads
Willy Kituuka 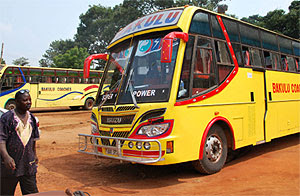 THE Police have impounded three buses belonging to Bakulu Coaches and suspended their operation licences until further notice.
They acted on the order of Uganda Transport Licensing Board.
The coaches, which were impounded on Saturday and Sunday while plying the Juba-Kampala route, are parked at Gulu Police station.
Over 200 travelers from both towns were ordered off the buses and advised to seek alternative transport.
The secretary of the Uganda Transport Licensing Board, Winston Katushabe, said the board decided to suspend the operating licences of two bus companies, Bakulu and Baby coaches, to give the Police time to inspect the companies and re-test their drivers.
This follows the recent accident in which two buses belonging to the companies were involved in a road accident, killing 29 people near Nimule in Southern Sudan.
Katushabe explained that the suspension would give the licensing board time to review the managerial systems of the two bus companies.
It would also ensure that the companies meet their obligations to compensate the bereaved and support the survivors who are still admitted in various hospitals.
“According to preliminary investigations, the Nimule accident was caused by speeding by the two drivers. We want to establish if the drivers of these two bus companies undergo refresher courses,” he said.
The Northern regional police spokesman, Johnson Kilama, said all the buses, which belong to the two companies, would be impounded and parked at Gulu police station as they wait for the next directive.
The directive to impound the buses was given to Kilama by the commissioner of traffic.
Many of the survivors of the head-on collision blamed the driver of Baby Coaches for reckless driving and sticking to Uganda’s traffic rule of keeping left instead of observing right when he crossed into Southern Sudan.
Posted by williamkituuka.com at 5:05 AM