of $189 billion since financial crisis hit

WASHINGTON, July 1, 2011—World Bank Group support to developing countries came in at $57.4 billion in fiscal year 2011, still above pre-crisis levels, with total commitments of $189 billion since the financial crisis took hold in 2008. 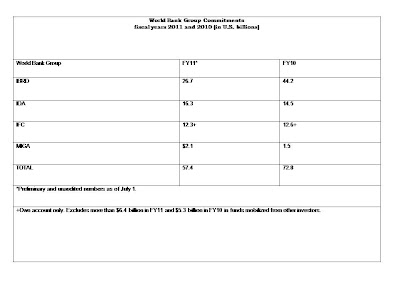 World Bank Group Commitments fiscal years 2011 and 2010 (in U.S. billions)
*Preliminary and unaudited numbers as of July 1.
+Own account only. Excludes more than $6.4 billion in FY11 and $5.3 billion in FY10 in funds mobilized from other investors.
As developing countries emerged from the financial crisis in FY11 (July 1, 2010 – June 30, 2011), the Bank Group provided an estimated 712 loans, grants, equity investments and guarantees to promote economic growth, fight poverty, and assist private enterprise.

World Bank (IBRD and IDA) commitments for social protection—including safety net programs for the poorest and most vulnerable—are estimated to reach $4.1 billion in FY11. Financing for infrastructure, critical for job creation and future productivity, is estimated to reach $20 billion in FY11—46 percent of total lending. In particular, IDA support for infrastructure grew to $7 billion, both a record high and a 31 percent increase over FY10. FY11 also saw unprecedented financing of $1.4 billion for natural disaster management, critical for adapting to climate change and combating the high number of recent natural disasters.
“Over the past year, the World Bank Group clearly demonstrated our commitment to support growth and opportunity for our clients even as the reverberations from the global crisis still send shock waves through the world economy,” said World Bank Group President Robert B. Zoellick. “As the multi-speed recovery takes shape, high and volatile food and fuel prices are stirring new challenges, putting vulnerable populations at risk. The World Bank is honing its focus on areas where we can add most value: targeting the poor and vulnerable; creating opportunities for growth; promoting global collective action; strengthening governance; and managing risk and preparing for crisis. We are doing all this while making the Bank a more transparent, accountable and results-driven institution.”
During the fiscal year, food prices climbed to near their 2008 peak, and the World Bank estimates that rising food prices pushed about 44 million people into poverty since June 2010. To help address price volatility, the Bank saw a strong focus on food security in FY11, including:
· A first-of-its-kind risk-management product that will provide up to $4 billion in protection from volatile food prices by giving consumers and agricultural commodity producers better access to hedging instruments.
· Boosting financing on agriculture to some $6 to $8 billion a year from $4.1 billion in 2008.
· The Global Food Crisis Response Program (GFRP) is helping some 40 million people through $1.5 billion in support.
· The Bank is supporting the Global Agriculture and Food Security Program (GAFSP), set up by the World Bank Group in April 2010 at the G20’s request, to assist country-led agriculture and food security plans and help promote investments in smallholder farmers. To date, six countries and Gates Foundation have pledged about $925 million over the next 3 years, with $520 million received.
In FY11, commitments from the International Bank for Reconstruction and Development (IBRD)—which provides financing, risk management products, and other financial services to countries—reached $26.7 billion, nearly double the FY08 pre-crisis level of $13.5 billion. This follows the record $44.2 billion in FY10 and $32.9 billion in FY09, as the crisis peaked. Cumulative IBRD commitments since the financial crisis (i.e.: FY09-11) reached $103.8 billion. Fast-disbursing Development Policy Loans, many of which focus on reforms to improve governance and increase transparency, comprised nearly 37 percent of the overall total for FY11, down from 47 percent in FY09 and FY10 – at the height of the global financial crisis - but still above the average of 31 percent in the pre-crisis period of FY05-08.

Strong Results for the World’s Poorest
In the past decade, the International Development Association, the World Bank’s Fund for the Poorest, has helped people build a better future for themselves, their families, and their countries. For example, from 2000 to 2010, IDA assistance has resulted in:
· More than 3 million teachers recruited and/or trained – more than 4 times the number of primary and secondary school teachers in France.
· Around 300 million textbooks purchased and/or distributed – 15 times the number of books in the New York Public Library.

· 310 million children immunized – equivalent to four times the number of children in the United States.
· Over 118,000 km of roads – enough to circle the globe nearly three times - constructed or rehabilitated and over 134,000 km of roads maintained.

Commitments from the International Development Association (IDA), the World Bank's Fund for the Poorest which provides low-interest loans and grants to 79 of the world's poorest countries, rose to a record $16.3 billion in FY11.
FY11 was the third year of implementation under the IDA15 Replenishment, which itself saw a record increase in development funding for IDA countries. Sub-Saharan Africa accounted for about half of the total IDA15 funding with IDA support focused on empowering and protecting the poor; strengthening institutions and governance; fostering gender equality; and addressing global challenges such as climate change.
During IDA15, IDA also expanded commitments to support regional public goods, including for water management, trade facilitation, and roads networks; approved $1.4 billion through the new pilot Crisis Response Window to mitigate the impact of the economic crisis and protect the poor; and strengthened its support for fragile states by providing $4.8 billion to these countries. IDA also boosted its support for countries facing natural disasters such as the rapid response to the Haiti earthquake of January 2010.
IFC, the largest provider of multilateral financing for the private sector in developing countries, again provided a record amount of financing to businesses in developing countries, helping the private sector create jobs, strengthen infrastructure, improve agricultural efficiency, and confront other development challenges. Preliminary and unaudited data as of June 30 indicate IFC invested about $18.7 billion in 513 projects in FY11, reflecting an estimated project value of around $100 billion. In FY10, IFC investments totaled $18 billion. IFC investments have more than doubled in the past five years.
IFC’s work in FY11 again included pioneering projects that address economic uncertainty and increase opportunity. In the Middle East and North Africa, for example, IFC and the Islamic Development Bank launched a program that will mobilize as much as $2 billion to promote Education for Employment, a vital project in a region where youth unemployment runs over 25 percent. In Turkey, IFC is helping the country use renewable energy to meet its growing demand for power. It structured its largest-ever syndication—a €700 million financing package for Enerjisa Enerji Uretim. IFC also provided essential support to the G20’s new Financial Inclusion Initiative, an effort aimed at enhancing access to finance for small and medium enterprises.
The Bank Group’s political risk insurance arm, the Multilateral Investment Guarantee Agency (MIGA) issued $2.1 billion in guarantees—a historic high. The agency continues to see a return to a more diversified portfolio across regions and sectors.
“In large part, MIGA’s success this year is due to the recovery in foreign direct investment from financial-crisis lows—and this is indeed a great story for development,” said MIGA’s Executive Vice President Izumi Kobayashi. “Paired with historic amendments to MIGA’s convention that expanded the pool of investments we can insure, this year’s results demonstrate that MIGA is delivering on our mission to promote foreign direct investment into developing countries to support economic growth, reduce poverty, and improve people’s lives.”
Commitments to sub-Saharan African countries—the Bank’s top priority—were at $9.4 billion in FY11, down from crisis levels of $13.85 billion in FY10 and $9.9 billion in FY09. FY11 commitments to Africa included $7 billion from IDA and $56 million from IBRD; $2.1 billion from IFC; and $243 million in MIGA guarantees for projects in the region.

Managing Risk
Currency, interest rates, and commodity prices have been volatile, and the impact of natural disasters has become more severe in recent years. As a result, the World Bank continues to engage with countries to improve risk management strategies and offer financial products that can help reduce their vulnerabilities. The volume of risk management transactions executed by the Bank on behalf of client countries this year to manage the volatility of currency and interest rate was $5.6 billion. In addition, the Bank provided advisory services on public debt management to 38 countries, as well as financial products that meet our member countries’ risk management objectives.
The World Bank Group continued to help clients mitigate natural disaster and weather-related shocks. For example, IBRD’s credit line for catastrophes, the Catastrophe Deferred Drawdown Option (Cat DDO) was instrumental in helping Colombia respond quickly to emergency relief and reconstruction needs after the country’s worst rainy season in decades. The CAT-DDO tries to address the issue of moral hazard related to post disaster financing; it provides incentives to client countries to engage in pro-active disaster risk management. Two new countries, Peru and El Salvador, also signed Cat DDOs with the Bank in this fiscal year.

· Our Open Data website now provides free access to more than 7,000 indicators and is accessible in five languages, and we’ve recently added features to make the data easier to search and download.
· July 1 marks the one-year anniversary of the Bank’s landmark Access to Information policy. Over FY11, the Bank posted 2,682 new documents and reports on its Documents and Reports site, and the public has viewed more than 2 million pages on this site since the AI policy went into effect last year.
· Tools such as our own Mapping for Results app and the Bank’s AidFlow website now promote better visualization of our work, bringing greater transparency and accountability to World Bank operations, strengthening the monitoring of results and enhancing the effectiveness of aid.
· The first-ever Apps for Development competition challenged software developers around the world to take our data, use it creatively and develop applications that raise awareness or contribute to MDGs. More than 100 apps were submitted with more than a third from developers based in Africa.
· We continue to integrate our governance and anti corruption agenda into all of the Bank’s work across countries, sectors and projects.

· We have also been encouraging governments to publish information, enact Freedom of Information Acts, open up their budget and procurement processes, build independent audit functions and reform their justice systems.