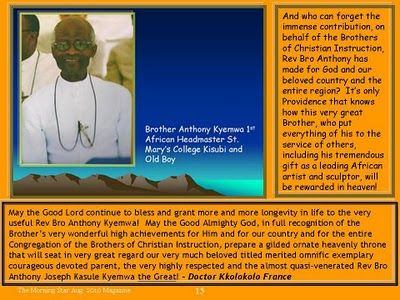 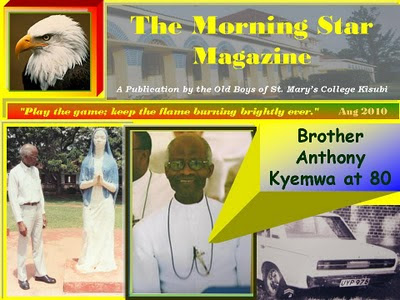 BROTHER ANTHONY KYEMWA MORE THAN A FATHER!
I will never forget the parental care of Brother Anthony Kyemwa former Headmaster of St. Mary’s College Kisubi (SMC). Kyemwa saw the school through very difficult time in the 70’s. The school had no fence but trust the Brother, he was in control. There was insecurity in Amin’s time, but the Brother made it to see us go for preps where teachers at times were scared. He endured through the strikes mostly due to food. I thank the Brother for the parental care. For the students, reading was pleasure (unlike the situation now when cheating of examinations is the norm by a number of students who don’t want to read yet they fictitiously want to show they excel at books. For us we could even compete in bathroom! Those students who would go for Express (reading from midnight to 3.00am) would wake up their friends for Oriental (reading from 3.00am to breakfast time or thereabout). Cooking water with bedsprings for heavy coffee was normal. We were good at summarizing for exams. Brother got respect from students; they could see him from a distance and would get moving very fast to wherever they were required. The Brother gave us freedom to move around Kisubi hill but this never compromised academic standards/excellence. Asked about what led St. Mary’s College Kisubi to be at the height of glory and fame it enjoys as far as academics is concerned, Brother Kyemwa said, “In my opinion, the aspirations of the students and staff led to the rise of the school. There was a strong spirit of competitiveness with other leading schools; that is Kings College Buddo, Mt. St. Mary’s Namagunga, Namilyango to mention but a few.” Brother Kyemwa’s message to the SMACK community if they are to maintain the established tradition of excellence is: “Discipline should be emphasized because it is with discipline that one can concentrate on one’s work. There should also be a strong school spirit among the students because this unites them in all aspects.” “When I meet former students of St. Mary’s College Kisubi, they always thank me for having emphasized discipline.” Brother Kyemwa would like to be remembered as one who tried under the circumstances of the time. He tried to keep the school standards up and never down.
William Kituuka Kiwanuka
Posted by williamkituuka.com at 4:51 AM