Leaders ignore alot of things which have good sense. If only President Museveni had left power in 2006, chances are that Uganda would be a better country. The developments since the Presidential campaigns took off in 2010 where substantial sums of money whose source is unknown were spent was a positive indicator that the future was not likely to be good for the country and here we are in a big mess. Only God may help Uganda given the situation the country is in.
William Kituuka Kiwanuka

A meeting between Kampala traders and government officials called to discuss an impending strike by the former ended inconclusively yesterday. The meeting was intended to find a solution to the unprecedented slow-down in business brought on by double digit inflation, high fuel prices and a severe depreciation of the Uganda Shilling against the dollar.
After five hours of discussion, both sides could only resolve to meet again today.
Kacita chairperson Everest Kayondo told Daily Monitor that nothing concrete was agreed upon. “We have resolved to continue with the two-day strike on Wednesday and Thursday. They did not have answers for our concerns.”
Kampala traders say they have been forced by the prevailing hostile economic conditions to stage a two-day sit-down strike over what they say is government’s reluctance to respond to the rising cost of foreign currencies used in import trade. Yesterday’s meeting was aimed at, among other things, convincing the traders to abandon the planned strike as government says it is looking for answers to their long-standing grievances.

Govt mute
Late last week, the government failed to deliver a scheduled explanation in Parliament on the state of the economy and the effect of the falling Shilling. Mr Jacan Omach, the minister in charge of general duties at the finance ministry, on Thursday told this newspaper that they were not ready but that they would brief MPs today, Tuesday.
The central bank has twice intervened to save the rapidly falling Shilling by injecting millions of dollars in the foreign exchange market over the past fortnight. But the average rate of Shs2,500 per dollar continues to be a source of concern for businesses which have already been hit hard by the effect of the high cost of fuel with petrol selling about Shs2,600 a litre.
With its members feeling the effects of the highest inflation in a decade at 16 per cent, Kacita had hoped to emerge from yesterday’s meeting with firm assurances from the government on possible interventions. Nothing came of it though. “They asked us to call the traders for a meeting but when we contacted most of our members they refused,” Kacita’s spokesperson Issa Sekito said.
Economic Monitoring State Minister Henry Banyezaki, who was part of the government team, however, said dialogue would continue with the traders. He expressed optimism that a solution would be reached in a week’s time. “We appreciate their concerns and found them very genuine,” Mr Banyenzaki said, adding that government was working hard to ensure that the situation is normalised. He did not comment on whether the central bank can continue intervening in the foreign exchange market given the fact that when the government bought Russian Sukhoi fighter jets valued at $740 million, it reduced foreign reserves from the recommended six months worth of import cover to four months.
The Uganda Shilling has witnessed a significant drop in value against foreign currencies, most prominently the US dollar. Bank of Uganda says the situation is being mainly inflamed by speculation and high corporate demand which have, together, led to larger than manageable outflows. This situation is pushing traders against the wall as they increasingly find it difficult to sell goods bought with very expensive foreign currency. 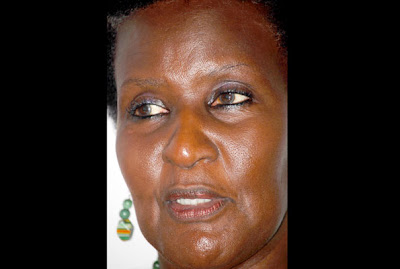 TO MEET: Ms Kyambadde
By John Njoroge
Posted Monday, July 4 2011 at 00:00
Traders in Kampala have unanimously decided to hold a two-day sit-down-strike over what they say is government’s reluctance to respond effectively to rising foreign currencies over the Uganda Shilling.
On Wednesday and Thursday, shops and other businesses will remain closed, according to the Kampala City Traders Association spokesperson, Mr Issa Sekito. He said the move is aimed at drawing the attention of government to the traders’ demands.

Other concerns
There are also growing concerns that foreign nationals are increasingly engaging in petty trade in Kampala, trade ideally meant for Ugandan nationals. The traders say the profits from petty trade are repatriated to foreign countries, money which would support many young Ugandan industries.
Four local business proprietors in March sued the Attorney General and Kampala City Council over issuing work permits and licences to foreign traders who had not deposited the mandatory $100,000 to the central bank. They said the traders, mainly of Asian descent, were engaging in retail and other petty trade activities in the central business hub of Kampala.
According to sources in the trade ministry, a meeting could take place today between the KACITA leadership and Trade Minister Amelia Kyambadde. Ms Kyambadde could not be reached for comment as her phone was switched off.
Posted by williamkituuka.com at 11:04 PM