WILL UGANDA ECONOMY SURVIVE CRUMBLING LIKE A PACK OF CARDS?

May be since he shot his way to power in 1986, President Museveni's real challenge is now. The 2011 Presidential elections may be to blame where the NRM Government spent so many billions whose source remains unclear, and this money looks like the trigger that is to disturb the economy for sometime. There is no clear solution to how the NRM can tame the situation more so given its heavy expenditures on administration for political purposes. Uganda would run very well with half the number of districts. Look at the size of the Parliament. Reasonable Ugandans want services not the useless politics because politics is not productive. Whatever IMF or others say about Uganda's economy, until the powers that be address the useless expenditures which are in place as the passport for President Museveni's continued leadership, we are yet to witness worse things! 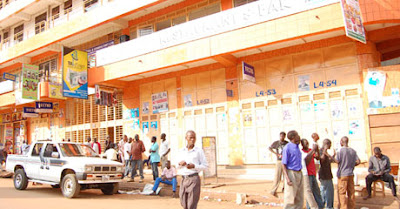 Many shops in and around Kampala city have remained close, Wednesday Morning. Photo by Steven Otage
Many shops in and around Kampala business district remain closed despite news trickling in that Kampala City Traders Association (KACITA) have reportedly called off their planned two day sit down strike that was set to begin Wednesday morning.
This follows leaders of the traders meeting with President Museveni to air their grievances about the tumbling shilling against the dollar and the increasing fuel prices.
The traders were demanding that government do more to curb the economic crisis that has engulfed Uganda for much of the year. The traders had planned to close their shops from Wednesday until Friday.
However, Daily Monitor reporters have observed that a substantial number of shops along Kampala road have remained closed.
Our reporter in downtown Kampala goes on to report that many shops in Kikuubo, Kisekka Market and along Namirembe road are also closed. Reports coming in from Masaka town also indicate that many shops have remained closed in observance with the ban.

THE International Monetary Fund (IMF) has endorsed Uganda’s Policy Support Instrument (PSI), saying it aims at maintaining macroeconomic stability and alleviating constraints to growth.
The endorsement, which was announced yesterday after IMF’s executive board completed the second review under the PSI for Uganda, means that the country is on the right path towards economic development.
IMF deputy managing director and acting chairperson Naoyuki Shinohara in a statement said: “Thanks to generally sound macroeconomic policies, Uganda withstood the global financial crisis and other shocks. Economic growth has recovered and is expected to strengthen, although inflation risks, mostly related to rising food prices, have increased.”
He added that the modest intervention by the Central Bank had mitigated volatility of the exchange rate, helping the financial sector to remain sound.
Reacting to the endorsement, the finance ministry permanent secretary and secretary to the treasury, Chris Kassami, said the endorsement shows that the economy is being competently managed.
A successful policy support instrument, he added, was important for the credibility of Uganda’s budget and attracting foreign investment.
“This endorsement gives a signal to investors and donors. Even Ugandans living abroad have the confidence that the money they send back home is safe,” Kassami said.
Policy support instruments are designed for low-income countries that may not need, or want IMF assistance but still seek the organisation’s advice, monitoring and endorsement of their policies.
“A PSI review is, therefore, an important tool in giving signals to the international community and investors about soundness of the economic policy framework,” Kassami explained.
PSIs are voluntary and demand-driven. The PSI for Uganda was first given a green light on May 12, 2010.
Shinohara said the main challenge facing economic policy makers at present is to adjust fiscal and monetary policies to safeguard macro-economic stability and rebuild policy buffers, including international reserves.
He noted that scaling up infrastructure investment will be key to faster growth in Uganda over the medium term.
Kassami said the Government will continue to invest in infrastructure, value addition, agriculture and human resource to improve competitiveness and exports growth.
Commenting on the depreciation of the shilling against the dollar, Kassami said the current problems of the shilling were temporary and would be handled.
He said international factors had affected Uganda’s exports thereby reducing foreign exchange inflows.
The shilling hit an all-time low of sh2,725 against the dollar on Wednesday due to the increasing global demand for the dollar.
“The Government is taking measures to improve exports to increase foreign exchange inflows and resolve the shilling problem in the short term,” Kassami explained.
But, he said, redeeming the shilling was a collective responsibility where all Ugandans have a role to play through working hard and exporting more. 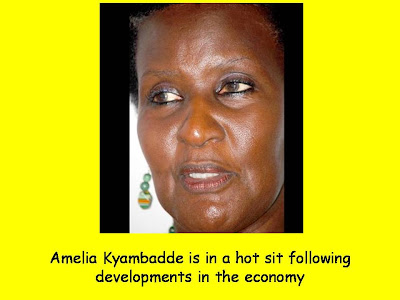 Posted Monday, July 4 2011 at 00:00
Traders in Kampala have unanimously decided to hold a two-day sit-down-strike over what they say is government’s reluctance to respond effectively to rising foreign currencies over the Uganda Shilling.
On Wednesday and Thursday, shops and other businesses will remain closed, according to the Kampala City Traders Association spokesperson, Mr Issa Sekito. He said the move is aimed at drawing the attention of government to the traders’ demands.

Other concerns
There are also growing concerns that foreign nationals are increasingly engaging in petty trade in Kampala, trade ideally meant for Ugandan nationals. The traders say the profits from petty trade are repatriated to foreign countries, money which would support many young Ugandan industries.
Four local business proprietors in March sued the Attorney General and Kampala City Council over issuing work permits and licences to foreign traders who had not deposited the mandatory $100,000 to the central bank. They said the traders, mainly of Asian descent, were engaging in retail and other petty trade activities in the central business hub of Kampala.

FIRMS CUT POWER OVER GOVERNMENT DEBTS!
By Walter Wafula
Posted Wednesday, July 6 2011 at 00:00
Kampala
Ugandans should brace for 24 hours of load-shedding starting today, as government runs out of money to pay for power generated by private electricity companies. The country’s sole electricity power supplier Umeme Limited yesterday announced the resumption of load-shedding, starting 6am to 6pm during day and from 6pm to 6am in the night.
In a text message to consumers, Umeme said, “Dear customer, we regret to inform you that UETCL has informed us of a generation shortfall of 50MW day and 120MW peak resulting into both day and night emergency load-shedding.”
In an interview yesterday, Mr Issa Ssekitto, the spokesman of Kampala City Traders Association, said the new round of loadshedding was bound to cripple business in Uganda. He said the power cuts just like the depreciating shilling against the dollar will culminate in today’s strike by the traders.
Umeme, however, said the situation is temporary and advises consumers to make use of power when available. Power producer Aggreko switched off 50megawatts based at Kiira, in Jinja while Electro-maxx Ltd switched off 22 megawatts based in Tororo District. Jacobsen Ltd is expected to shut down its 50-mw plant in Namanve today, drastically cutting electricity supply to the national grid.

Emergency power cut
“This shortfall means that the amount of electricity that Umeme receives for distribution is greatly reduced thus prompting emergency load shedding to regulate the distribution of power,” said Mr Sam Zimbe, Umeme’s general manager.
Mr Erias Kiyemba, the chief executive officer of UETCL, yesterday said the Independent Power Producers (IPPs), cut off supply to government due to non-payment of arrears totalling Shs200 billion. “This is what we are requesting from government as arrears for March to June. Generators cannot buy fuel from their suppliers because they cannot pay them,” he told Daily Monitor in an interview.
Mr Kiyemba said the IPPs without good financial backup are under pressure to stop generating power.
The power transmission company, which is the sole buyer of power in Uganda, said the IPP are demanding that the government first settles the arrears for March and April amounting to Shs92 billion and pay the balance within the next three months. IPPs contribute 40 per cent of the electricity consumed in Uganda and other power demand is met by hydropower generated from Nalubaale (180mw) and Kiira (200mw) power stations.
However, the combined megawatts generated by the two stations have drastically reduced to 185mw due to drought. According to Umeme, now there is a shortage of 120mw during peak time and 50mw during day, resulting in both day and night load shedding.
Last week, Parliament blocked a request by government for additional Shs92 billion to pay for power. Just in April, Parliament approved Shs92 billion to pay for power. Government said this was used to settle power debts for January and February. The request was part of Shs61.3 billion supplementary budget requested for by Finance State Minister Fred Omach.
Government currently pays about Shs50 billion per month to subsidise the cost of power. The power subsidies have risen from Shs8 billion per month in 2007, to Shs50 billion this year. UETCL attributes the rise to depreciating shilling against the dollar and rise in fuel prices. “We sell the energy in shillings but buy in dollars,” said Mr Kiyemba.
The shilling has lost ground to the dollar by over Shs600, standing at Shs2,530 per dollar. For government to maintain power tariff at the current level, government must give UETCL Shs488 billion in subsidies
Posted by williamkituuka.com at 12:35 AM