WHY HAS UGANDA ECONOMY TURNED SILLY? 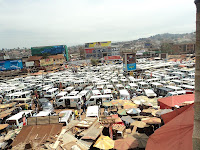 The Taxi business has been left to UTODA who seem to lack the scientific management of the business. If Government got a good deal from the tenderer, many taxi parks would not be in such a sorry state. 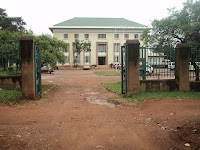 The Government rents premises of Buganda Government including the Mengo Court Building, but it surprises that Government does not see it as a necessity to pay what is due to Mengo in time, which constrains the other projects may could undertake on behalf of the people of Buganda. 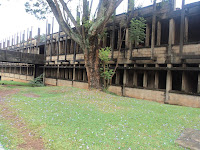 The monies due to Buganda Government from the central Government could go a long way in seeing Bulange Plaza and other infrastructures modified, but trust NRM Government, they think that is 'justice'! 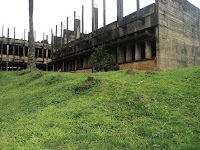 Another view of Bulange Plaza which if completed can greatly help the income of the Buganda Government, that is for once, if the Central Government pays what is due to Mengo administration. 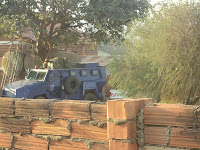 You can trust NRM Government; the armed vehicles are on alert to deal with any demonstrations!
Some people are failing to understand the reason why Uganda’s economy is the way it is. A part from the executives in top positions in Government, plus the Members of Parliament, most salary earners are in for a big ride from the Government of Uganda. The reasons why things are the way they are can be listed, among these are:
1. President Museveni’s dream of wishing to turn around the country by among other things creating a middle class;
2. Wrong policies by donors which Museveni Government has embraced wholesale;
3. Being unfair to other parties hence failing to deliver on their wishes;
4. The patronage which the NRM Government has used to stay in power;
5. The deceit regarding the economic performance, hence the giving of false indicators (growth rates to impress the donors);
6. Greed among the NRM top leadership;
7. Getting priorities completely wrong;
8. The military factor.

TO ELABORATE ON THE ABOVE FACTORS
President Museveni’s dream of wishing to turn around the country by among other things creating a middle class
The President has all along wanted to turn around the country, but this is not a job one man can do. He forgot that with time, when you overstay in office, diminishing returns apply, and now the outcome of this is a big army of near to useless people who are paid handsomely. Many did not expect Museveni as a candidate to make more than 50% in the recently concluded elections. These ‘facts’ are a result of many deals which involve not only tampering with voter registers hence leading to a number of people bouncing where they normally vote from, but also outright dishing of cash at various levels. MPs got shs 14m and shs 6m was taxed. It is only an idiot you can tell that Government gives you money for its programmes and such money is taxed. Secondly, given that many of the MPs have big bank loans, it is illogical to deposit money you expect for a Government programme on an individuals account. The Late Sulaimani Kiggundu's Greenland Investment Company bought Uganda Grain Milling from Caleb International who had won the bid to buy the company, and it is alleged that good will not less than shs 500m could have been paid to Caleb International! There are companies that have benefited from hand outs in big amounts through such criteria not clear and this has all been a loss to the tax payer.

Wrong policies by donors which Museveni Government has embraced wholesale
The donors saw Museveni desperate and to give him money, the ‘sensible’ he had to do was to foot their line. Today, the country is in a mess with the power sector completely in private hands and the liability is seen to be far greater than if Government had more shares in it. The Agro-processing industrialization to bring in foreign exchange would be far if Government had not bought wholesale the idea that it should not do business but just create a conducive environment, yet the targeted local investors don’t have capacity. Privatization, though was wrongly done, it is also a fact that some NRM big shots were beneficiaries. They bought companies or disguised their interest in the privatized entities. How on earth would Uganda’s Coffee keep competing when the Quality regulator ceased to exist. We are paying the price.

Being unfair to other parties hence failing to deliver on their wishes
Though many sacrificed to see the NRM get to power, president Museveni’s Governments have kept ignoring the wishes of the people, and among these is the federal arrangement which is cherished by many. The NRM Government has not stopped there but deliberately decided to frustrate the Buganda Government by not only refusing to return assets duly belonging to the Kingdom, but even the rents due from the premises used by Government are not paid when due. For some of these sins, the NRM administration is calling for a punishment from God because as the creator, at all times when someone becomes too much, He has a formula to tame him to size.

The patronage which the NRM Government has used to stay in power
NRM Government is spending a lot of money into its patronage scheme which among other strategies helps to see it remain in power. This time round in the recently completed elections they over did it, and the results are there for all to see. Now, the public are striking simply because they think that is the only way to see the NRM get priorities right. It surprises to see people whose source of money iis not clear buy land and put up buildings in record time. Much of this money is believed to be spills from Government resources. Where the country has professionals, you get the transport sector run by non professionals. The mess is so great, those operating in the business are taxed and money is not receipted (talk of welfare without accountability), but because NRM benefits from their ‘services’, they are left to mess the thing the more to the extent that one can sit in a taxi from the Main park at Kampala for an hour before it reaches the clock tower. A gentleman started constructing two houses using concrete bricks within the same plot of land. This man is making tile roofed houses which are progressing very fast, and surprisingly, he was able to buy an adjacent piece of land at shs 100m and he paid cash. Much of this money is believed to be from patronage resources. There are many near no bodies who own buildings around the country and one wonders where they get the money from. Some of these are believed to be disguising the actual owners.

The deceit regarding the economic performance, hence the giving of false indicators (growth rates to impress the donors)
Many of the indicators by NRM Government are believed not to be real. It is only because the donors believe in these percentage growth, etc that the NRM Government is using them for its own ends. And, in here lies part of the problem which is making the economy look silly.

Greed among the NRM top leadership
One cannot rule out greed among the NRM leadership as one reason why the economy has grown silly. It was long expected. The greed which is expressed in form of corruption has made the country lose a lot to the extent that service delivery which would be far better is a near shame in many instances. People have made money in procurement, and if this money were better used, many more would be a happy lot.

Getting priorities completely wrong
When you see the administrative expenditure by the NRM Government, you only pray to God to change the situation. At least 46 new constituencies were added to the over 300 that were existing such that a poor begging country has 375 MPs, on to that add presidential advisors, whose advice if were worth at all the country would be better off. It is sad. The Doctors are trained in Uganda and only to look for greener pastures. You pay a teacher about shs 250,000 and expect him to pay the tuition in University! Government has been advised against sponsoring students more so given that it is the rich who benefit, but trust them, they just continue, yet if all students paid tuition fees, the amount paid by each would be less than what the situation is now.

It is only God who may touch on the hearts of our leaders to do what is good for the people short of that ….

William Kituuka Kiwanuka
Posted by williamkituuka.com at 1:46 AM