A COMMENT
By Patrick Kaboyo
Posted Wednesday, July 13 2011 at 00:00
Getting into a taxi from any of the taxi parks on a normal day is a challenge for most public transport users. For instance, whenever it rains, the parks cease to be a challenge but turn into hell. One has to be ready to be soiled in unbearable volumes of mud, rubbish and the filth that litter the park from all directions as one struggles to push and end into an unsafe taxi.
With barely no service offered by Utoda - ranging from litter bins, toilets, water-points, resting shades and guides to those that are not Ugandans, - most school children have been the most severely affected taxi park users for they leave school late, tired, hungry and eager to reach home on time to be able to catch-up with homework, but end-up spending hours in the park standing ready to be pushed and injured in order to secure a seat.
Most park users reach their destinations late in the night due to the time spent on pushing and scampering to catch a taxi, getting stuck on the road because of the traffic jam and more time to snail behind the many cars that leave the parks for various destinations.
Whereas the story of our taxi parks may seem strange and disturbing to a section of citizens who do not use them, I encourage them to use these parks for a week so as to know that the parks have deep potholes, open manholes, flowing sewers, heaped leaking litter bins, and in-disciplined taxi touts that use uncouth language. All the above should be abhorred in this century.
Selflessly, we need to support any effort to drive sense into this corrupt Utoda group. The support we are to offer should be devoid of politics, or veterans syndrome, which is exhibited by many Utoda agents, who masquerade as ex-servicemen out to intimidate any citizens working to create order in the parks.
Utoda’s monopoly has not transcended into any tangible benefit like gazetted parking areas, identifying and marking taxis that ply various routes to guide illiterate and foreign passengers, offering tickets to passengers to be used on any route. Instead, we have continued to witness the ‘illegal’ fee collections by Utoda right in the parks and roadsides, unnecessary waiting for taxis by passengers in the parks, political peddling in the management of Utoda affairs, use of filthy language, double standards of some vehicles that load anywhere and don’t pay any fees, making unsanctioned turns, not following route numbers when loading, and loading from anywhere, among others.
All the bad events unfold as Utoda guides watch passengers being pushed, falling flat, losing mobile phones, wallets, and sunglasses, among others, as a result of scuffling to secure a seat in old and rusty taxis many of which are in dangerous mechanical conditions and have to be pushed before they start. Passengers’ clothes have been torn or spoilt completely due to sharp pointed metallic pieces in some taxis.
The disorder, disrespect, corruption, lawlessness and monopoly in the public transport sector should be addressed by designing a comprehensive transport policy, dismantling the existing monopoly by inviting other players to the sector, spelling out the corporate social responsibility of the players in the industry, widening the roads to create space for buses and other vehicles, urgently putting-up a town railway system, removing unnecessary parking in the city by multiplex, offering stickers to cars that do not park within the city and charging only those that park in the city, and above all, getting rid of all DMCs vehicles from our roads.
Mr Kaboyo is the executive director of the Coalition of Uganda Private School Teachers Association
coalitionmovers2003@yahoo.com 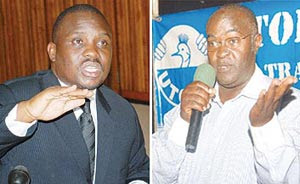 By Vision Reporter
THE bickering between the Lord Mayor of Kampala, Erias Lukwago and the leaders of UTODA, is far from over.

UTODA boss John Ndyomugyenyi said the gap between the association and Lukwago had widened because of the threats he has been making.
“We need to work with Lukwago, but he has been threatening us so we have decided to stay away from him. When someone begins to shout at you in your absence, you first take cover as you try to make sense of his intentions,” Ndyomugyenyi said.
He compared Lukwago to a father who shouts at his children, when he is returning from home. “We want Lukwago to calm down and so we can engage in talks. Some of us are older, more educated and experienced than him. He should consider that before threatening us,” he added.
Recently, Lukwago summoned UTODA officials, asking them to submit their financial statements but they did not show up. Lukwago claims that UTODA remits very little money to Kampala Capital City Authority. UTODA reportedly collects sh2b and only remits sh390m to KCCA.
But Ndyomugyenyi said UTODA’s revenue records were not discussed “just like that” and urged anyone who was interested in them to approach Uganda Revenue Authority. “In UTODA, we are allergic to discussing money. If you want such information, go to the accountants at KCCA or URA,” he said.
But despite the wrangles, Ndyomugyenyi said UOTDA had improved the standards of transport in the country and feared that such conflicts would overshadow their achievements.
“By the time we took over, the public was very insecure because of the theft, robberies and other crimes perpetuated by the drivers.”
Ndyomugyenyi explained that UTODA had successfully used its kanyamas to deal with suspected criminals. He added that UTODA would stand the test of time as the case has been in the past when rival associations collapsed.
Meanwhile, Lukwago said if UTODA officials thought the language he was using was offensive, they should put their complaints in writing.
But he ruled out any possibility of holding private meetings with UTODA officials, saying it would compromise the transparent approach he had come with.
Lukwago explained that he was not convinced that UTODA could continue to efficiently manage transport in Kampala. “They have messed up the sector and everything is in a shamble. The mess can only be rectified by breaking UTODA monopoly.”
Lukwago added that he did not mind who ran the sector in Kampala, as long as it was done following the right procedure. He accused UTODA of refusing to submit their memorandum of understanding, contract papers and returns to enable the council to assess their performance. “I have learnt that UTODA is registered as a non-profit making organisation, but they are busy making profits and that is why we want to verify their documents.”
Lukwago said KCCA passed a resolution to set service standards in the city and that UTODA would have to comply with their demands.
Posted by williamkituuka.com at 11:12 PM