Today, 28th July 2011, His Highness King Ronald Muwenda Mutebi officially launches the use of Bio gas in Buganda. This is against the background that many people don't know how the technology works yet many have resources that can see it in use at household level. 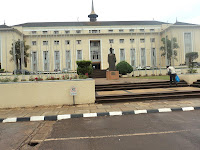 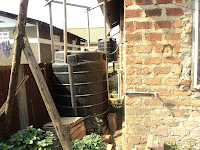 The photo is of a domestic bio gas plant which uses ripe banana peels which when crushed ensure the user of bio gas. This can be emulated by many, more so at a time when our forests are being cleared for firewood and charcoal. 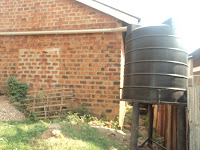 Water harvesting can greatly help supporting the mixing of inputs into the bio gas production, as that water is preferred to tap water as supplied by National Water and Sewerage Corp. 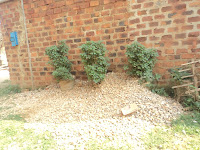 The wastes from production of bio gas are useful in the garden for healthier crops.
KABAKA MUTEBI TELLS OFF BUGANDA TRAITORS

His majesty the Kabaka of Buganda addressing downtown business community at Nakasero market. Photo by Faiswal Kasirye
By Robert Mwanje

Posted Thursday, July 28 2011 at 15:21
Kabaka Ronald Muwenda Mutebi on Thursday warned the Baganda against kingdom traitors describing them as agents of doom whose target is to bring down his kingdom.
Addressing thousands of kingdom royalists at Nakasero market, Kabaka Mutebi said some people were pretending to be serving Buganda yet they are conspirators.
“We are aware of some people who are pretending to be on the kingdom’s side yet they are agents. They aim to weaken the kingdom and destroy its main pillars,” Kabaka said amidst the cheering crowd adding, “They are trying to fail us in this battle but we should remain united,”.
On Tuesday, seven people claiming to be members of the royal family stormed the Mengo palace [Lubiri] saying they wanted to meet the Kabaka. Although the Kabaka doesn’t reside there, the group claimed that they have on several occasions been denied audience with the Kabaka whom they call their brother.
The group also accuses kingdom officials of misleading the Kabaka and illegally parceling out kingdom land. They were later engaged in a scuffle with kingdom supporters who accused them of trying to bring confusion in the kingdom. In the melee that ensued, the disgruntled royals were injured but this didn’t stop police from arresting them.
Mutebi arrived at Nakasero Market in Kampala amidst celebrations from ecstatic traders at around 10; 45am accompanied by Katikkiro John Baptist Walusimbi and several Kingdom officials.
The huge cheering crowd lining the streets prompted the Kabaka to disembark from his 12 car motorcade and walk through Sinayi-bin and Dastur Street to the market. He was welcomed by market leaders, Lord Mayor Erias Lukwago and other divisional mayors.
Nakasero market and several shops in the upper Kampala remained closed while several streets including Market Street, Entebbe Road, Luwum Street and Dastur Street were closed to traffic.
Kabaka’s tour through the Central Business District is part of the activities to celebrate his 18th coronation anniversary scheduled for this Sunday at Kasangati –Gayaza, Wakiso district.
Kabaka also decried the poor working environment and business fractuations which traders were going through but encouraged them to join hands against oppressive policies and challenges.
From Nakasero, Kabaka continued to Kawempe Division where he is to commission a Bio gas plant in Gayaza and visit model farmers in Namugongo.
The Kabaka’s programme was clashing with that of President Museveni who was also scheduled to visit down town Kisekka Market yesterday but postponed his visit “until further notice”.
The kingdom has a strained relationship with central government over unfulfilled pledges and demands. Since the Kabaka was enthroned in 1993, the kingdom has been pushing for the return of its property including land; officials’ estates that were seized by the post independence government of Dr Milton Obote (R.I.P) who abolished the monarchy in 1966.
Kabaka Mutebi was enthroned as the 36th Kabaka of Buganda on July 31, 1993.
The kingdom rotates the coronation celebrations in the 18 traditional counties to enable the host county benefit through rebuilding its headquarters.
During his 17th coronation anniversary celebrations last July, the Kabaka sent a strong demand for the kingdom to be granted a federal status.
Posted by williamkituuka.com at 11:56 PM