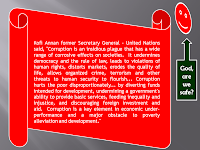 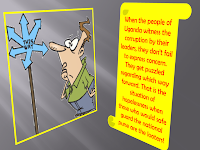 As long as it can be proven beyond reasonable doubt that Amama Mbabazi is caused financial loss to the people of Uganda for his personal gain, there is no way he can be safe. He may see himself second to god in Uganda, but that does not exonerate him. Be it today or after, he has to face the law. This business of using office, feeling to be so high can be used with a short lived cushion as long as the NRM reigns, but Mbabazi MUST know that as long as he has a case to answer, he will have to face the law, and if there are any recoveries to be made, he will or his estate will meet them. There is need to cultivate a culture of being responsible. Who can witch hunt a person who is clean? Some people see themselves on earth as long as the NRM under Museveni is in control, but this caliber of people are advised to better do business the right way. No body will go away with the money of the people of Uganda and imagine he will not pay back. Ugandans have to recover from whoever steals their money as long as it can be proved that he did. Period.
William Kituuka Kiwanuka

11.1 CHOGM Disbursements to the Ministry
The Committee was informed that by the time of audit, the total funding allocated and released to the Ministry to cater for CHOGM activities amounted to Shs.4,869,892,986. An amount of Shs.130,282,210 was however still on the bank Account as at 31st January, 2008.
Findings
• The Committee, however found that the Ministry of ICT had spent an extra US$5,000,000 outside the budget approved by Parliament for CHOGM. This amount was reportedly spent on the TETRA communications systems (walkie talkie system) procured by the Ministry of ICT, but for use by the security.
• The money was diverted from an ICT loan for the National Data Transmission Backbone Infrastructure Project to the Security Ministry and yet, when the loan was being approved, the walkie talkie system was not included in the loan request.
• Whereas the Permanent Secretary, Ministry of Information Communication and Technology (ICT) had signed a Memorandum of Understanding with Huawei for the supply of the TETRA system at US$4,500,000, the same PS instead went ahead and released to Huawei US$5,000,000 for the equipment, including an unexplained $500,000. This therefore led to a loss of US$500,000 which cannot be accounted for.
• Further, the Committee found out that this expenditure, though spent on CHOGM activities, was not declared to the Auditor General during the Special Audit on CHOGM, contrary to the requirements of the National Audit Act
• The Committee also found that the procurement of the system under the Security Ministry was carried out without regard to the PPDA Regulations.
• The original contract between Government and Huawei provided that Huawei was supposed to do the supply of all the equipment, and was only supposed to seek consent from Government. This was not done. Instead, Government went ahead to select the supplier named Balton (U) Ltd. It was not clear how this particular contactor was sourced, and whether the price charged was competitive
• The Committee found out that, H. E the President, in the meeting of 12th June 2006, had “questioned the expenditures on communication equipment”, and directed that “the army communication equipments should be used (by the Police, etc), instead of purchasing new communication equipment”
• The Minster in charge of Security, however, took it upon himself to introduce the issue of US$5,000,000 to the President, the first time ever, the figure surfaced. Whereas the Minister explained to the Committee that he was at the tail-end of the procurement process, the Committee found out that there had been no process at all, and that the alleged process was actually his own creation. He even failed to produce any evidence in support of his argument.
• Whereas in a meeting with HE the President, it was resolved that another meeting be held between HE and the Security technical Committee later, to rationalize and justify the proposal, the Minister could not table any minutes to show that such meeting ever took place, and what advice such committee had rendered.
Instead, on 13th October 2006, the IGP wrote to the Minister for ICT (and copied to the Minister for Security) claiming that the security Committee had convinced the President that they should procure the TETRA system from Balton at US$5,000,000. The Committee questioned the mandate of the IGP in writing to the Minister of ICT instead of his line Minister in charge of Security, who had all along been pursuing the matter with the President. Whereas the President was mentioned in this letter, he was not copied the same letter, and instead, it was copied to the Security Minister.
• The Minister also could not prove that he was not, in any way, associated with Ms Balton, its executives and staff. As such, the committee could not rule out conflict of interest on the part of the Minister.
• Further Investigations on the Countries that had been supplied with the TETRA system in the last ten years do not show that Uganda was one of the beneficiaries of TETRA supplies. The Committee could therefore not ascertain whether the TETRA equipment were ever supplied at all, and if so, whether they were genuine.

Testimony by members of the Security Committee
• The security staff testified before the Committee that they had made contacts with 15 potential suppliers of the required equipment, and they finally zeroed on 5 of them. One of them was Balton U Ltd, which had indicated that they would be willing to supply the equipment at US$3.2 million
• While the President was concerned about the budget and source of funding for this equipment, the ICT team in the meeting informed him that there was some money under the Chinese loan for the Backbone Transmission project that could be used to procure this equipment.
• The ICT Ministry took the lead as the lead procuring entity and sought clearance from the PPDA for direct procurement, which they obtained.
• However, the Minister for Security, Amama Mbabazi, put aside the indicative price of US$3.2 million, for the equipment and instead informed the President that they were able to find equipment at a cost not exceeding US$5,000,000. Interestingly, when Balton was later asked to submit a bid, it submitted a bid of US$4,999,999.
• This information contradicted what the Minister had earlier communicated to the Committee, that by the time he informed the President about the $5.0million estimate, the procurement process was at the tail end. But these witnesses confirmed that no procurement process had commenced at that time, at all.
• Later, when security technical staff learnt that the specifications and quantities they had requested for had been reduced and were to be supplied at U$5.0million, they complained. Consequently, the ICT Ministry reduced the contract amount to US$4.5 million, although then they agreed to supply all that the security Committee had requested. Even then when the supplies were made, there were shortfalls as follows;-

• They also informed the Committee that the Executive Sales person at Balton at the time of this procurement was one Ms Susan Katono, who was responsible for processing and issuing of price quotes, etc
• The Committee also separately established that the said Ms Susan Katono is related by blood to Minister Amama Mbabazi.
• Whenever Susan Katono, wrote about this procurement, she copied to Hon. Amama Mbabazi and yet Zeeudi managing Director of Balton never did so.
• The Inspector General of Police (IGP) Kale Kayihura never attended the meeting of 12th September 2006, with H.E. the President where Hon. Amama Mbabazi asked for US$5,000,000 for the purchase of this equipment. It was therefore the responsibility of not Kale Kayihura but Minister Mbabazi or the Minister of Information, Communication & Technology to ask for the procurement. Unfortunately Hon. Amama Mbabazi chose to play “hide and seek” games and instead used the Inspector General of Police.
• The Government of Uganda paid some US$500,000 as commission to Huwaei on a demand that was not included in the contract. The Committee found this criminal.
Posted by williamkituuka.com at 2:22 AM