IS PRESIDENT MUSEVENI TELLING THE TRUTH ABOUT LAND OFFER BY BUGANDA TO MEHTA? 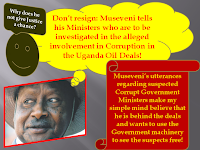 CBS Presenter Sunday quoted President Museveni while addressing the press that in response to a question about the land offer to Mehta by Buganda Government, that he had been told that the land has squatters! The presenter himself accompanied those who went to have a look and says that the Mehta group were satisfied with the availability of the land. Now, the question is; who told Museveni lies? Is it Museveni who is not telling the truth?
Posted by williamkituuka.com at 11:19 PM