SHOULD PROF. BUKENYA STAND AGAIN TO RECLAIM THE SEAT HE LOST DUE TO BRIBING VOTERS? 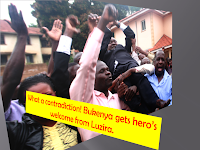 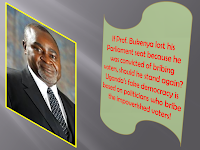 Court annulled the election of former vice president Prof Gilbert Bukenya as Busiro North Member of Parliament.
High Court judge, Kibuuka Musoke ruled that the petitioner proved to court that former VP bribed voters by giving them money and other gifts to influence them to vote for him.
Bukenya, who was on Monday remanded to Luzira prisons over his role in the mismanagement of funds meant for the 2007 CHOGM summit in Kampala, was dragged to court by his rival in the February elections, Hussein Kasta Bukenya.
The judge said that Hussein Kasta made a total of 18 bribery allegations against Bukenya and that court has been able to prove 3 of them, thus annulling the results and ordering a fresh election.
Bukenya had won the February election contested by 7 people with 17,382 votes against Kasta’s 4,953 votes.
In his petition, Hussein Kasta accused Bukenya together with the Election Commission of election malpractices.
He alleged that Bukenya used money and gifts to bribe voters to retain the parliamentary seat claiming that the former VP gave out soap, salt and sugar to voters in Buwanika and Kamuli parishes against the electoral laws.
Kasta cited the 300,000 shillings which he claimed that Bukenya gave Living Hope Organization, a youth group in his Kakiri village to woo them to vote for him.
He also accused the EC of misspelling his name on the ballot paper as Katya instead of Kasta which he said robbed him of the victory.
On the other grounds for the petition, however, Justice Musoke ruled that the petitioner failed to prove that the bribery affected the results in a substantial way.
After the ruling, Bukenya’s lawyer Kiyemba Mutale said he’s waiting for instructions from his client on whether to appeal or not.
Kasta on the other hand said he was happy justice had finally been dispensed. He thanked his witnesses who proved to court that the former vice president bribed voters. Kasta expressed confidence that he will win in the by-elections.
Bukenya’s supporters were left speechless after the ruling when Kasta’s supporters threw insults at them saying they cannot deny anymore that their candidate won through bribery. The animated voters said they will wait to see where Bukenya will now get the money to bribe voters.

DEM GROUP REPORTED VOTER BRIBERY
· DEMGroup’s focus group research showed that many citizens will not consider
candidates that do not give them something. For example, In Buganda and Busoga
regions, respondents quoted a Luganda saying that: “Oluganda kulya. Orugenda
Enjala terudda”, translated as: “friendship is about eating. If a friend visits your
house and goes without food, she/he will not come back”. Though respondents in
this and the Afrobarometer survey were mixed about whether they would vote for
someone that bribed them, the trend of both amounts of money used to bribe and the
universal expectation by citizens that it will happen is a concern. In the January 2011
Afrobarometer survey, respondents who say that they had been offered money to buy
their vote increased from 14% in December 2010 to 17% in January 2011. This
constitutes over 3,000,000 voters over one month before elections. The majority (just
over half) of offers made, were of money; rising from 53% to 57%). Vote buying offers
have shifted away from household items (27% to 7%) to jobs/ food/ alcohol/ clothing (20to 36%). Of those offered, the majority of the offers are coming from the NRM (80%)
followed by FDC (9%), UPC (1%) and the rest of the political parties less than 1%.

The former Vice President was allowed to leave Luzira Prison on bail but asked to report to court every Tuesday of the month.
It was a moment he was waiting for and it came to pass. Former Vice President Gilbert Bukenya was yesterday released on bail pending trial, after spending a week on remand at the Luzira Maximum Security Prison to much fanfare.
Until last Tuesday, hope to have him acquire bail was hanging in balance after it emerged the date for hearing of his bail application had not been fixed before the anti-graft division of the High Court. But Prof. Bukenya, who was yesterday driven to court by prison authorities led by the Commissioner in-charge of Prison inmates, Mr Apolo Baker Asinja, got his supporters and some of fellow parliamentarians into a celebratory mood.
Despite heavy police deployment in and outside the premises of the Anti-Corruption Court in Kampala, the enchanted crowd, sang songs, including the national anthem, in praise of the former vice president. His supporters and MPs shouted in unison, describing him as a hero and vowed to stand by him until the trial ends.
Prof. Bukenya, who was stripped of the Busiro North parliamentary seat in Wakiso District recently, was remanded to prison on October 3 by Chief Magistrate Irene Akankwasa after he was committed to High Court for trial and his bail cancelled.
Justice Paul Mugamba of the Anti-Corruption Division of the High Court ordered for the release of Prof. Bukenya on similar terms and conditions earlier based on by the Magistrate’s Court in the release. However, his release did not come on a silver platter.
Court asked Prof. Bukenya, to pay a cash bail of Shs50 million and deposit his passport upon presenting six sureties. In addition, he was asked to report to court every second tuesday of every month until court asks him to stop. Attorneys, Mac Dusman Kabega and Enos Tumusiime, applied for his temporary release on medical grounds.
Prof. Bukenya is charged with abuse of office for his role in the award of a Shs9.4 billion deal to supply at least 200 executive vehicles for the Commonwealth Heads of Government Meeting to Motorcare four years ago. He is also facing another charge of abuse of office in connection with the award of the contract to supply 80 units of BMW R 1200 Police Outrider motorcycles for use -- still for the same summit.