IF MBABAZI COULD ONLY RETIRE, IT WOULD BE THE BEST NEWS 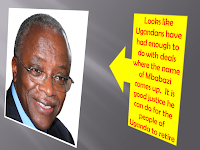 A section of legislators have hatched a plan to cause the censure of ministers accused of profiteering in alleged dubious oil deals within two weeks if they fail to resign from their positions in 10 days.
The move was confirmed after a closed-door meeting held at Parliament by at least 20 Members of Parliament (MPs) spearheaded by the Butaleja Woman MP, Ms Cerina Nebanda, who is the chief petitioner.
The move follows Tuesday’s resolution by Parliament directing the three ministers to step aside to allow investigations to commence. The MPs also slapped a moratorium on the execution of the oil contracts and transactions until the necessary laws have been put in place.
In a special meeting on Friday, however, Cabinet resolved to disregard the Parliamentary resolution and defended Mbabazi and Onek.
“We opposed the idea of asking the ministers to step aside because these are allegations and there is no proof in the documents tabled before Parliament. What was laid on table is fake and the documents were concocted by some embassy,” a Cabinet source told Sunday Monitor yesterday, adding that Cabinet is not bound by Parliamentary resolutions unless the ministers choose to resign on their own, or if the appointing authority asks them to do so.
The source said if the ministers resign, they will be setting a precedent of Parliament dictating over them.
‘It was ultimatum’
Ms Nebanda, however, confirmed that their Thursday meeting resolved to issue Mr Mbabazi, his Foreign Affairs counterpart Sam Kutesa and Interior minister Hilary Onek with the 10 days ultimatum, which expires on October 25.
The youthful MP told Sunday Monitor that the censure motion, that also applies to Mr Kutesa, who stepped down over allegations related to Chogm scandal, is ready and that they would begin on the censure process that involves a number of stages as soon as Parliament reconvenes, should the ministers fail to heed their warning.
“We agreed in the meeting to apply Rule 93 of the Parliamentary Rules of Procedure to those ministers that will not have resigned by October 25 when Parliament reconvenes because we in the 9th Parliament want to leave a mark by stamping out corruption,” Ms Nebanda said.
“The ministers can’t be probed when in office as they will interfere with investigations,”
Rule 93 states that a member who is desirous of moving a censure motion against a minister shall notify the Clerk in writing of his or her intention, citing the grounds for the proposed censure motion and giving detailed particulars supporting such grounds.
Kampala Central MP Mohammed Nsereko warned that the ministers’ failure to step down tantamount to contempt of Parliament. According to Article 108 of the 1995 Constitution, the prescription outline as grounds for a minister to vacate office include abuse of office, misconduct, physical or mental incapacitation, mismanagement and incompetence.

PM ‘insulated’
MPs can apply any of the listed grounds to execute a censure motion in the case of a minister. However, grounds for the removal of a prime minister are unclear, especially by Parliament.
The grounds captured in Article 118, of the 1995 Constitution provides that the Prime Minister can only vacate if the appointing authority sacks him or if he resigns or is disqualified to be MP. It thus makes it unclear if MPs will find room within the legal confines in its present state to censure the prime minister.
But the MPs resolve seem undeterred. According to Mukono Municipality MP Betty Nambooze, “the ministers ought to have resigned like yesterday to save the country from embarrassment but I don’t know why they are not doing this. We are ready to push them out of their offices.”
Buyaga County MP Barnabas Tinkasiimire on the contrary, disagreed with his colleagues, saying the censure process is being rushed.
“Let Parliament conduct its investigations and those found guilty would be censured,” he told Sunday Monitor yesterday.
Recently, the Speaker of Parliament, Ms Rebecca Kadaga, was threatened with a censure motion over her refusal to recall Parliament from recess to discuss the secretive oil Production Sharing Agreements between the government and Tullow Oil PLC, a British oil exploration and production company.
Posted by williamkituuka.com at 2:12 AM