PRINCE BARIGYE WHO SURVIVED A PLANE CRASH HAS FINALLY PASSED ON!

Royals from Buganda, Tooro and Ankole kingdoms yesterday gathered at Entebbe Old Airport to receive the body of the late Prince John Barigye.
The body was flown back home at 11am in a chartered plane from Nairobi where he died of kidney failure last week on Friday.
The Ankole Kingdom anthem was sung by his relatives, friends and royals after the casket was lowered from the plane.
The Katikkiro (prime minister) of Buganda, Mr John Walusimbi, described the late Barigye as “a good friend” of the Kabaka of Buganda.
“He has always been a good friend and even by the time he died, he was in close touch with the Kabaka. It’s a big loss to Ankole and Uganda,” he said.
Princess Elizabeth Bayaga of Tooro said her father and King Gasyonga of Ankole were close family friends.
“We grew up with the late Barigye and our parents were close which created a warm relationship between Tooro and Ankole,” she said.
Gen. Elly Tumwine, a member of the Ankole royal clan, said the death of Barigye will rejuvenate the vigor to build a strong kingdom, adding that kings are a uniting factor.
“Like a tree is cut down but grows stronger, the death of the Ankole King should make the kingdom stronger,” Gen Tumwine said.
He said kings are the foundation of values of a given nation because without them nations have no cultural symbols.
Princes David Wasajja and Junju of Buganda, the Mengo Health minister, Mr Nelson Kawalya, Barigye’s brother Edward Kiraka, Barigye’s heir, Charles Rwebishengye, his widow Denise Kwezi and her children were among those who received the body.
President Museveni was at the airport minutes before the plane carrying the late Barigye landed but continued to his destination.
The body was taken to Mulago Hospital, awaiting a funeral service at Namirembe Cathedral. Burial will be held on Sunday in Nkokonjeru in Mbarara District. 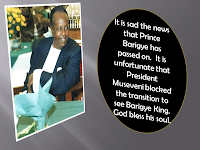 We have all the time lived with thieves connected to the NRM administration. It was a very sad occasion when some thieves were aboard a Uganda plane and were being followed by among others Bank of Uganda staff that the plane they were in crashed and one of the victims wa Prince Barigye who was found on the run way in his chair.
God Bless his soul.
PRINCE BARIGYE IS DEAD
By Risdel Kasasira

Prince John Barigye of Ankole is dead. He died yesterday evening at the Agha Khan Hospital in Nairobi, Kenya where he had been admitted.
The Prime Minister of Ankole, Mr William Katatumba said Prince Barigye had in the past been having problems with one of his kidneys.
In March this year, he was flown to India where he underwent a successful kidney transplant in India. The prince was steadily recovering.
Barigye was crowned king of Ankole in 1993 but the Government on the orders of president Museveni immediately nullified the restoration of the kingdom on grounds that there was need to build consensus.
Mr Barigye has also been in the middle of a divorce suit with his wife Denise Kwezi and mother of his four children. The case was before the Nakawa Chief Magistrate’s court.
However, the court had advised the couple to amicably settle the dispute out of court to avoid exposing their affairs in public.
Posted by williamkituuka.com at 5:51 AM