WE THE PEOPLE OF UGANDA MUST STOP ACTING SILLY: THE MPs WHO LEFT KYANKWANZI ARE HERO's

The MPs who left Kyankwanzi are the epitome of a new Uganda. We are fed up of a country constantly drifting to stone age times simply because of selfish interests who don't have any shame when the economy is messed up, everything is upside down, but they enjoy with their families.
2 Peter 2:19 ESV / 81 helpful votes

They promise them freedom, but they themselves are slaves of corruption. For whatever overcomes a person, to that he is enslaved.
William Kituuka Kiwanuka 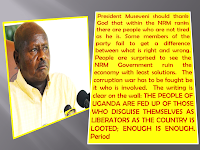 MPs WALK OUT ON MUSEVENI
By Yasiin Mugerwa & Sheila Naturinda

Why they walked way
Theodore Ssekikubo.
“When we saw that some of our members were conniving with the President to hijack the independence of Parliament we walked out.”
Chris Baryomunsi.
“I don’t take alcohol that I disregard what I debated on the floor so when they come on the floor to rescind them, I will definitely oppose them again.”
Cerinah Nebanda.
“My conscience wouldn’t allow me be part of a group which wants to hoodwink the public. Why didn’t we do it in the open but hide in Kyankwanzi?”
Henry Musasizi.
“I have never seen honorable MPs debate and turn around to say they debated with no information.”
Wilfred Niwagaba.
“We can’t be party to undermine the institution of Parliament.”
Nsereko Muhammad.
“Some of us are not willing to change Parliament resolutions because it is our country first. Let them have their views and we have ours.”
In an unprecedented response to what they called “a sinister plot to hijack the independence of Parliament and entrench corruption in the oil sector”, a group of legislators yesterday walked out on President Museveni at the party’s stormy Kyankwanzi retreat.
Those who witnessed this drama, told Sunday Monitor that the trouble began after the President proposed that the NRM Caucus resolve to overturn the Parliament resolutions on oil that placed a moratorium on executing oil contracts and oil transactions on the Executive until the necessary laws have been passed by Parliament.
“The President wanted us to give him power to proceed and sign new oil agreements as if nothing happened in Parliament and we thought this was ridiculous,” a source said. “We told him that we were not drunk by the time we passed a resolution to halt the signing of new agreements. We wanted to first see transparency and accountability before oil turns into a curse.”
When the President refused to budge, the retreat that had started on a lighter note, proposing ways on how to fix the strained economy later turned riotous with ministers led by Henry Banyenzaki (State Economic Monitoring) and other members from the Movement Secretariat heckling whoever attempted to oppose the President.
While Mr Museveni defended his ministers accused of being corrupt, some MPs were accused of conniving with the opposition to paralyse government using the oil debate.
But chief petitioner Theodore Ssekikubo told the President that by usurping the powers of Parliament he was attempting to tinker with the Constitution whose framers were unequivocal on separation of powers. But in an infuriated response, the President reportedly warned that if the NRM Caucus refuses to grant him the power to proceed with the status quo, “his only option will be going back to the bush.”
In a heated exchange between the NRM Chairman and Mr Ssekikubo, as others banked, tabled and heckled, the President was tasked to explain whether by going back to the bush he will be seeking to “overthrow himself”.
As debate raged on, Prime Minister Amama Mbabazi reportedly proposed that MPs return to House with a motion to annul what Parliament had agreed upon. But the President rejected this and instead asked the caucus to give him powers to sign new Production Sharing Agreements; a move Parliament stopped until oil laws are enacted.
“The President wanted to arm-twist us but we rejected that proposal in public interest and we broke ranks. We told him that the NRM Caucus is not Parliament but he refused. When we saw that some of our members were conniving with the President to hijack the independence of Parliament we walked out and we don’t have any regrets to make,” Mr Ssekikubo said.
Other MPs who walked out of the President are; Dr Chris Baryomunsi, Muhammad Nsereko, Wilfred Niwagaba, Henry Musasizi, Cerinah Nebanda and Barnabas Tinkasiimire.