A WARNING TO UGANDA THIEVES 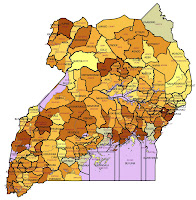 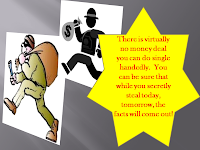 CORRUPTION ENDEMIC IN UGANDA
The state of Uganda: Corruption at all levels of government is allowed to continue because many people in rural areas like Katine do not know they have the right to demand services, argues Ssemujju Ibrahim Nganda
The majority of the estimated 27.2 million Ugandans live in rural areas. According to the Uganda Bureau of Statistics, 23 million people (84.6%) live in rural areas, while 4.1 million live in urban centres.
Therefore, failure to provide basic services to rural communities means neglecting almost the entire country, which, unfortunately, is the reality in Uganda.
The majority of people living in rural Uganda live off the land and by nature. The sick descend on the jungles for unprocessed herbal medicine and more than half of births are still administered by ill or untrained traditional birth attendants.
Results from the 2008 national primary leaving and lower secondary schools exams paint yet another grim picture. While performance generally declined, the exams were a disaster for rural schools, as many did not have a single candidate pass in division one (the highest grade achievable). What this means is that few or no rural primary school pupils will be admitted to top secondary schools in the country - primarily because of poor grades, but also because of lack of money.
Good secondary schools in towns charge about $250 per term, yet the majority of people living in rural areas don't earn a $1 a day. Failure to enrol at a good secondary school limits rural children's chances of attending university and getting a good job.
This perpetually keeps children and their parents in poverty because they will never enjoy the regular income salaried people do. The majority of rural people still fetch water from stagnant dirty wells, which exposes them to diseases, the treatment of which will take up whatever little money they may have.
All these facts are known and well documented by the relevant government departments. In fact such statistics are used to beg for foreign aid.
Unfortunately, when this aid comes in and is added to locally raised government revenue, it is misappropriated or extravagantly used by the elite in the leadership. A bulk of local revenue and aid money is outrightly swindled and the balance officially used by those in leadership to pay their salaries, allowances, office furnishings and to buy luxury 4X4s.
What's left over is sent to the rural areas to provide basic services. Unfortunately for Uganda, local governments, the highest being a district council, just provide another layer of bureaucracy and another place for public funds to be misused.
The districts receive little money for the maintenance of rural roads, construction of classrooms, among other activities, but much of it is shared between officials. Tenders to construct classrooms and roads are given to the campaign managers of district councillors, who will often use sub-standard materials to save enough money for themselves and to pay bribes.
The head of state who presides over corruption at the centre has lost the moral ground to enforce discipline at the local government. In fact, as long as a corrupt district official remains loyal to the president and the ruling party, there is very little chance of concrete action ever being taken against them – except, perhaps, if donors demand it.
Corruption has become so endemic in Uganda, and is an accepted way of life, that when someone is appointed or elected to a public office they think it is now their turn to take advantage.
The lack of civic competence makes the situation worse. People from rural areas treat the provision of services as a gift or favour from the government. They do not see it as their right to demand it and, therefore, settle for anything. They will never know, for example, how much money has been passed to their local leaders for a road or a school. Even if shoddy work is done they remain thankful because they never expected it in the first place. Public servants have got away with a lot of stealing because they face no sanctions from the beneficiaries. In fact, corrupt people are glorified in the villages because they are the ones with money and have the capacity to solve some of their problems, such as driving a critically ill person to hospital, driving couples around on their wedding day and sometimes building churches and mosques.
Internal conflicts and bad politics have also undermined provision of services to rural areas. Areas that have endured conflict, mainly in northern Uganda and parts of the east, have received less development attention because the government has been preoccupied with ending the Lord's Resistance Army insurgency for 22 years.
Clean water and good roads would be a luxury in these areas where people are commuting between their gardens and internally displaced people's camps. It is no wonder that up to 60% of the population in northern Uganda still live below the poverty line and up to 35% in the east, compared with 16% in the central and 20% in the west of the country.
Uganda president Yoweri Museveni on the campaign trail in 2006 President Museveni on the campaign trail in 2006. Photograph: AFP
The Ugandan president, Yoweri Museveni, was voted into power mainly by the western and central regions and there is a tendency to reward loyalty. The majority of ministers and other public servants are appointed or recruited from these two regions. This doesn't suggest that the situation is so good in the rural areas of central and western Uganda, but it is better than the rural north and east.
These regions have less bargaining power because of low representation at the crucial decision making tables in State House and the cabinet.

• Ssemujju Ibrahim Nganda is political editor of the Weekly Observer in Uganda
Posted by williamkituuka.com at 12:03 AM