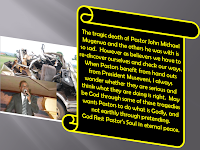 Pastor Mike Mugerwa of Saints Gate Pentecostal Church in Makidye died on spot in a motor accident along the Jinja-Iganga highway on Thursday.

The accident occurred at 7pm in Kakira when two trucks and a super custom all traveling from Iganga knocked each other. Another Ugandan and three whites also died on the spot.

Paul Mwerangye, the only survivor in the super custom is admitted at the Islamic clinic in Jinja. He said the accident occurred when the truck driver who was driving ahead, slowed down abruptly to negotiate a hump.
The speeding trailer from the back hit the super custom squeezing it between the two trucks. Mwerangye, a brother to Captain Peter Musherure of the Uganda Peoples Defence Forces, said the super custom had six passengers.
The group was traveling from Iganga where they had gone for a gospel outreach program. He sustained deep cuts on the head. Police and Red Cross arrived at the scene at around 7:30 pm. Jonathan Musinguzi, Jinja district police commander says the bodies were taken to Jinja hospital morgue
Posted by williamkituuka.com at 11:37 PM