WAS THERE VALUE FOR MONEY FOR SHS 166.998 BN UNDER THE NORTHERN UGANDA SOCIAL ACTION FUND (NUSAF)?

It should be interesting to have a non biased study concerning NUSAF as at 24th November 2008. I get to imagine that the would be beneficiaries of this money would be far away now as regards their welfare if only this money went into tangible things that directly create or are used in the creation of value. For instance in small scale industries for extraction of various agro-based raw materials. In a country known for corruption, one cannot expect value for money from this type of funding apart from benefiting the politicians and some civil servants involved.

According to the report on the performance of NUSAF (Source: 11th Annual Report of the Uganda Human Rights Commission – page 74 – 76), Uganda Government was able to provide funding for 9,340 sub-projects in the conflict affected districts by the end of 2008; with total funding of Uganda shs 166.998 billion disbursed directly to community bank accounts.

Details of beneficiary districts are as per tables below, however, it does not make much sense to see the quantity in numbers of beneficiaries, instead, whether the money improved the welfare of the targeted recipients.
William Kituuka Kiwanuka 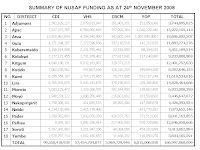 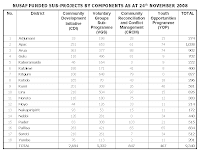 Posted by williamkituuka.com at 12:47 AM